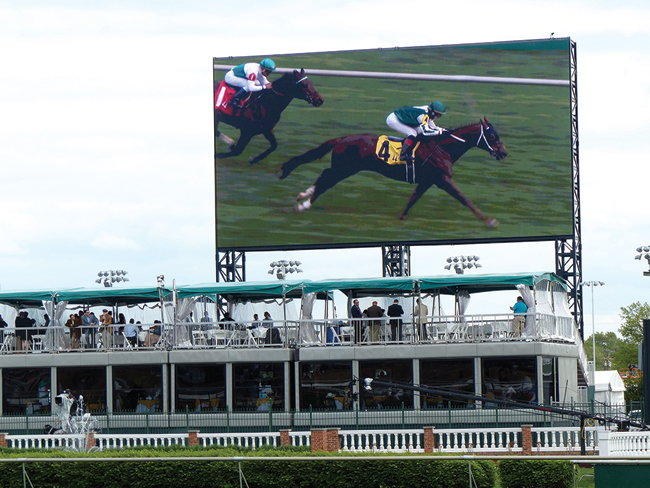 Back in April, in “Everyone’s Talking 4K: When will signage embrace it?”, I discussed several factors that should be considered when deploying 4K systems. Since then, there have been many related developments: plummeting 4K display prices, shipping 4K media players and at least one high-visibility 4K signage project in the world of sports.

The transition of a new technology from engineering curiosity to a mainstream moneymaker is sometimes accompanied by false starts. All the required pieces of the puzzle do not always come to market at the same time, or at market-ready price points. Although 4K signage might currently be of interest to adventurous brand marketers and media buyers, high-end deployments over the next year could also benefit from a plan that offers a 4K option. Ultra-HD or 4K offers as big a jump in communication density, impact and engagement as did the transition from standard def to HD. One transitional strategy uses 4K displays to enable the combination of full-HD video windows or zones with super crisp graphics and text.

Full-HD signage stuttered for several years until display prices, player/server capabilities, bandwidth availability and pricing and, most importantly, creative and authoring capabilities, were all sufficiently developed to create a tipping point. The transition to 4K should be faster and smoother. As 4K display prices plummet, many vendors are rushing to introduce a variety of tools that enable the rapid deployment of cost-effective, super-HD signage.

These new tools are not simply souped-up HD hardware and software, but a new generation of technologies prepared to push visual impact to 4K and beyond. For example, Shuttle Computer Group’s DS81 PC/player is based on Intel’s latest Haswell 4th gen Core processor, with capabilities intended to ease the transition to higher-res signage. In addition to a wealth of high-speed interfaces, including USB-3 and dual Gig-E, the DS81 can also support dual 1080p display as a stepping stone to full 4K deployment.

The high-visibility project I mentioned at the start features the world’s largest 4K display, a 171-foot-tall by 90-foot-wide LED Panasonic video board deployed at Churchill Downs for this year’s Kentucky Derby. This signage project, like most place-based or DOOH ones, involved many companies and products: The control system is made by Vizrt, Siemens managed the project onsite including AV support, and the sign is operated by the Van Wagner Big Screen Network.

A couple of other major 4K
signage network installations are in the works but under wraps at this time. But even in more “routine” deployments, 4K promises to significantly enhance the viewer experience. Imagine a stadium’s luxury box with a large 4K display that shows multiple, full-HD views of the on-field action, along with a full-HD quadrant of game-day updates and sponsored messages. Or, a 4K display in portrait orientation, in a high-end retail environment showing larger-than-life runway video from Fashion Week. These and many more high-impact applications are well within signage state-of-the-art, for less money than a full-HD signage system just a few years ago.

Establishing a complete 4K workflow is a key step for integrators and other solution providers who want to catch the next wave in digital signage. This may mean filling in capability gaps with new partners and providers, and stepping up training to create the needed in-house expertise.