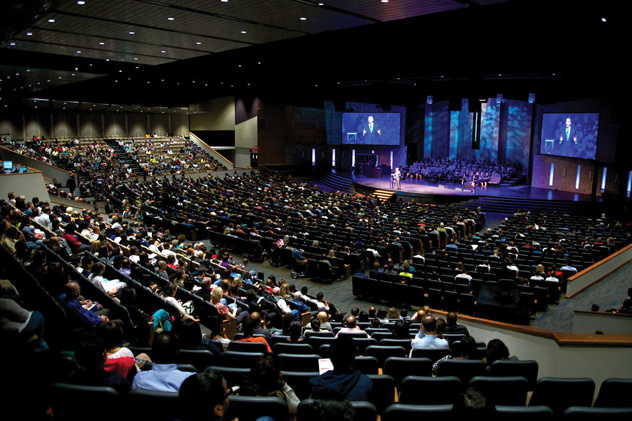 If you’ve been hearing a lot about social media as a marketing tool, but are still not convinced of its worth, you may be surprised to discover how the technical director of Calvary Church (www.cal varynaperville.org) in Naperville IL, first found out about Olympia WA-based audiovisual and lighting integration firm, CCI Solutions (www.ccisolutions.com).

Piqued His Interest
Naperville and Olympia aren’t exactly neighbors on a map, but when Technical Director David Sheneman started reading CCI Church Relations Director Duke DeJong’s tweets on the social media network Twitter, it piqued his interest enough to put the integrator in the running to bid on the church’s complete audiovisual and lighting renovation. “We had never done this kind of an upgrade before, so choosing the right integrator was a process for us,” Sheneman said.

He noted that he had worked with CCI Solutions at a former church, and run into the integration firm at trade shows, but the company rose to top-of-mind through social media. “I was following Duke on Twitter, reading about his adventures at different churches around the country,” Sheneman revealed. “CCI Solutions just seemed like a good fit for us, although we did interview other companies before making our choice.”

The key drivers behind CCN’s renovations were to improve and upgrade the technology in the space and to add more seating. After all, powerful worship supported by superior audiovisual systems typically puts worshippers in the seats of any Christian church. But, in order for the church to grow effectively, the seats must be available to be filled.

Expansion
Calvary Church’s sanctuary expansion from 2500 to 3000 seats gives the Assembly of God church the capability of handling large Easter and Christmas services without relying on less-than-ideal overflow spaces, as well as to accommodate additional growth for regular Sunday service. “When we do larger events, we typically pack the house. We’ve used overflow seating in at least three different rooms simultaneously during our Easter productions,” Sheneman said. “Prior to the renovation, we were close to capacity quite often at our 11:00am Sunday service. Being able to have more people in our sanctuary worshipping together at one time was a key factor driving our expansion.”

In spite of adding more seats, the church didn’t add square footage to the sanctuary. Instead, the stage front was moved back about 12 feet and seating was rearranged, with risers added in the back for stadium seating. “The whole room got a facelift and then some, but no outer walls moved,” DeJong said.

Repositioning the front-of-house mix location to a space close to the back wall in the center of the sanctuary also created room for an additional 25 or 30 seats.

With expanded seating, the church required an audio system that would cover the entire space with clear, even sound. The 10-year-old sound system had been underperforming for several years and components were beginning to fail.

Sheneman pointed out key technology objectives in the project: “replacing worn-out equipment with modern equipment, along with upgrading the infrastructure to add more capabilities down the road.” He noted that the wiring was as old as the sanctuary itself (20 years) and no longer met the church’s needs.

An L-Acoustics KARAi line array system, along with a Yamaha CL5 digital mixing console and Dante digital snake system, gave the church clear, even, high-fidelity coverage, along with the flexibility it needed to move the choir and orchestra to various points on the stage without extensive cable runs and tie lines. In praise of the new infrastructure, Sheneman told Sound & Communications, “It comes back to flexibility and the ease of set up and access.”

Upgraded Video
The video system, which had long been a neglected aspect of the worship environment, also received an upgrade that puts video front and center, quite literally, during services. Christie projectors, an electric center screen from Stewart Filmscreen and large, high-definition side screens from Da-Lite help create a multisensory experience to support worship. Additional Panasonic cameras complement the pre-existing handheld camcorders to expand the church’s capabilities for image magnification (IMAG). A Ross Carbonite video switcher provides the ability to send any source to any screen easily, allowing the church to continue to fulfill its vision in regard to video ministry in an easier, more streamlined way than ever before.

Let’s take a peek inside CCN’s sanctuary to see how the AV systems contribute to a more engaging worship experience and enhance ease-of-use for the church’s largely volunteer technical team. Sheneman heads up a department of 40 volunteers who work on audio, video and lighting, plus a handful of part-time sound engineers who mix services.
During two out of the first three services in the renovated space, DeJong operated the sound board, while providing training to the staff.

‘Home Run Sound’
When Sheneman first approached CCI Solutions, he cited sound as the church’s “biggest frustration,” noting that the new audio system had to be “nothing short of a home run.” After evaluating several options, DeJong and the CCI team, led by Senior Systems Consultant Mark Pearson, decided on what DeJong deemed “a home run with fireworks,” an L-Acoustics KARAi line array.

The system includes three line arrays comprised of nine boxes each, flown in a mono distributed configuration. Two arrays of four SB18i subs each flank the center array, while four double-18 SB28 subwoofers exist in sub-bunkers beneath the stage. Eight LA8 amplifiers power the mains and the subs.

Finally, four coaxial 8XTi and four 5XT speakers for front fills, powered by two LA4 amplifiers, are positioned across the front of the 100-foot-wide stage as front fills. Sound is routed digitally using Harman BSS London digital processing for the main sanctuary audio system. A separate DSP is used for the web-feed and support spaces. To save money, the church reused existing stage monitors, as well as the band’s Aviom system. CCI added Sennheiser wireless systems and in-ear monitors for the band’s nine worship singers and guitarists.

Superior Acoustics
Without treatment, the acoustics in the room were less than ideal. “If we’re going to have a home run with fireworks sound system, we need the room to support it,” Pearson said. The acoustical design included two-inch acoustical panels across 80% of the area of back walls to provide the necessary absorption for the powerful line arrays. However, it was important to balance the acoustical dampening with enough life that the congregation would feel engaged. “We wanted the sound to be well controlled, but we also wanted some vertical life in the room,” Pearson explained. “Great sound doesn’t do anybody any good if it’s not engaging the audience. We wanted the congregation enveloped in their own singing and in the worship experience.”

In addition to the absorption within the space, CCI designed, in collaboration with the architect, an acoustical cloud system above the stadium seating. The cloud diverts acoustical energy back into the room so congregation members can hear themselves, and each other, singing and feel as if they are part of the overall worship experience.

Tying It All Together
At the heart of this state-of-the-art audio system is a Yamaha CL5 digital mixing console. “The church already owned an M7CL console and was familiar with the overall software of the CL series. Staying in the Yamaha architecture had always been in the back of their minds,” Pearson said.

Including a new CL5 in the upgrades gave the church the opportunity to repurpose the existing M7CL as a broadcast mixer with the addition of MY16-AUD cards. The church mixes and records services for streaming online and posting on its website for on-demand viewing, as well as for DVD production.

The CL5 at front-of-house gave the church the flexibility to add the Dante digital snake system, vastly simplifying setup and adding versatility to the stage layout. Pearson explained, “When we started looking at the vast wiring requirements for the stage, we approached 160 inputs and outputs, combined. Running all that wire and adding the necessary floor boxes and patch bays to wire this project in a traditional manner would have been extremely expensive.”

Pearson began considering ways to simplify the wiring and reduce overall project costs, and the Dante system was the logical answer. “The stage has 10 floor boxes in key areas. Each floor box has at least one primary and one secondary Dante drop; some have two.”

CCI provided the client with Yamaha RIO1608-D, RIO3224-D and RI8-D stage boxes, mounted in racks on wheels. “Wherever the band goes, a stage box goes with it. The audio volunteers just plug into the network. There’s no re-patching necessary. They can put any performer or speaker anywhere they want,” Pearson said, noting that the infrastructure saved “tons of copper and a healthy amount of time and money.”

Sheneman added, “We have the flexibility to move the band around much more easily, which is especially helpful during our Christmas and Easter productions.”

‘Front And Center’ Video
As with the audio system, flexibility and ease-of-use were key considerations when it came to the video system upgrade, as well. DeJong said, “The big push was to make the image magnification and graphic presentation a prominent part of every service.”

To that end, the CCI team specified and installed two 22’x11.6′ Da-Lite screens, with two Christie L2K1500 projectors delivering 15,000 lumens. The screens are used primarily for image magnification, with images captured through a collection of Panasonic cameras.

CCI supplied a Panasonic HPX370PJ camcorder for house center, while the church added its existing four Panasonic HPX170PJ to use for auxiliary shots from other angles.

In the back center of the stage sits a 32’x12′ custom electric screen from Stewart Filmscreen, powered by two Christie LX1500 3LCD projectors. “The screen had to be electric to offer the flexibility to raise it, at the flip of a switch, in order to show the decorative cross and backdrop on the wall,” Pearson said.

Of the choice to use 4:3 aspect ratio, rather than wide screen, projectors, Pearson explained, “The images are edge-blended to create an ultra-wide screen. It was a more cost-effective solution to achieve a resolution that is almost high definition.”

Rounding out the projection portion of the video systems is a Hitachi CPWX11000 6500 lumen WXGA projector feeding a pre-existing confidence monitor on the sanctuary’s back wall.

DeJong noted, “All of the video upgrades centered around making video a real part of what they’re doing. They were already doing the work, but nobody could really see it; it wasn’t a strong part of the service.”

“For the Christmas production, we did more than we had ever done, yet it was so much easier than it’s ever been in the past,” Sheneman pointed out, noting that the church technical team is looking forward to raising the bar with this year’s Easter production, still in the works at press time.

Satisfied Customers
To come full circle, CCN has become a cheerleader for CCI Solutions, willingly discussing the positive experience the church had with the integrator. “We are very satisfied.

Everything we asked CCI to do was done very well and even beyond our expectations in many areas,” Sheneman said.

DeJong noted that Senior Pastor Randal Ross even led the congregation to applaud the CCI team on the first Sunday of services in the new space. “The sound clarity and evenness to every seat in the house is light years ahead of where they were,” DeJong said. “It’s a dramatic improvement.”