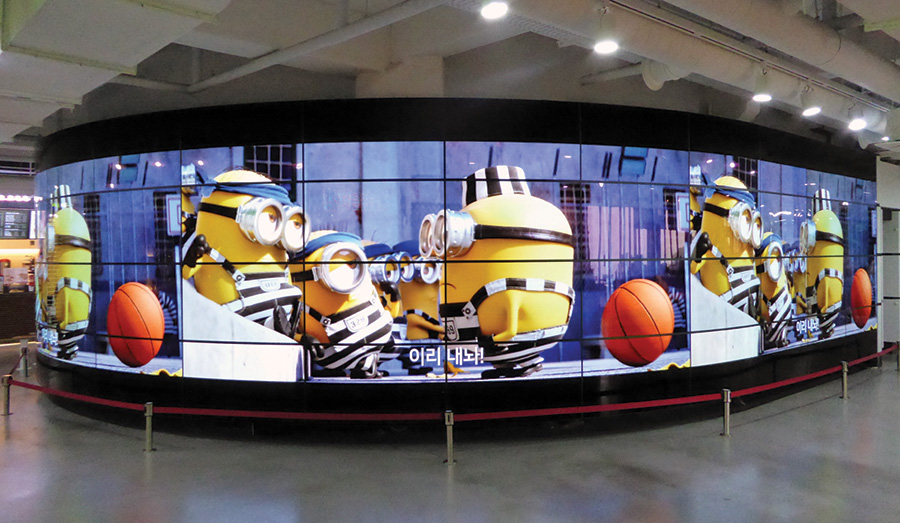 Back in July, three other journalists and I were invited to visit LG Display’s LCD and OLED panel manufacturing and R&D facilities in Paju, South Korea. While there, our small group was able to take a quick look at the mostly automated LCD assembly process in one of the enormous manufacturing “fabs” that are arranged around the property.

More than 30,000 people live and work in the Paju complex (which, incidentally, is just five miles from the North Korean border). To say the facility is large would be an understatement: It’s basically a self-contained city, sporting two Gen8 (P8, P9) and one Gen7 (P7) manufacturing lines for LCD and OLED panels. Nearby, an enormous OLED fab (P10) was under construction—one that will be used to manufacture hundreds of thousands of OLED display panels each month.

At present, LG is the largest manufacturer of OLED televisions and large display monitors in the world. Although there are several different companies engaged in OLED research and development, and others that manufacture smaller quantities of smaller OLED screen sizes (such as Samsung Mobile Display), LG Display has decided to put all its chips on this technology for televisions.

Given the plethora of LCD manufacturing fabs in Asia, as well as the plummeting costs of LCD TVs (largely due to China’s increasing dominance in the market), the LCD panel manufacturing and TV businesses are fast becoming a zero-sum game. It’s why legacy brands, such as Toshiba, Hitachi, Mitsubishi and Panasonic, have exited the consumer television market—the profit just isn’t there.

So, a big investment in OLEDs is quite a gamble, especially because televisions that use the technology sell for higher prices than comparably sized LCD sets. Right now, a 55-inch Ultra HDTV that uses OLED technology retails between $2,000 and $3,000, depending on whether there is a sale or special promotion.

OLED display technology is very different from LCD; actually, it has more in common with CRTs and plasma, because it uses an array of emissive color pixels (plus white pixels for higher brightness). Emissive architectures don’t suffer from the issues that hamstring LCDs, such as contrast flattening and color de-saturation when images are viewed off-axis. The OLED “stack” is also much thinner than an LCD. In fact, in the case of the new LG “wallpaper” OLED displays, it’s just 2.5mm.

Because it’s also possible to form OLED pixels on plastic surfaces, we can create a new and different class of flexible displays. I’ve mentioned this on more than one previous occasion: The world’s largest market for displays is transportation. Think of anything that moves and transports people and goods—ships, trains, planes, cars, trucks, subways, etc. G-forces and sustained vibrations are the two biggest threats to displays in those applications. By making the substrates thin and flexible, we can minimize both threats’ long-term effects.

And OLED’s picture quality is exceptional. The behavior of OLEDs as they slowly come out of black (quiescent state) to full white is very predictable—these are low-voltage devices, after all—and it’s possible to show images with very low luminance values that are not limited by the high black levels of LCDs.

There’s always a “catch,” though. OLEDs (like any other emissive display) have a practical brightness limit. For a full white screen, that’s in the range of 100cd/m2 to 200cd/m2, whereas a 10-percent window can hit about 500cd/m2. Contrast that with an LCD TV equipped with quantum dots, which can achieve a peak small-area brightness measurement in excess of 1,000cd/m2.

Although you might need more horsepower if you’re viewing images in a brightly lit room, 500cd/m2 peak brightness is more than adequate in a darkened room or in the evening. And the ability of OLED displays to render shadow detail down to near-black (close to .0005cd/m2) means they can show images with high dynamic range—more than 20 stops of light can be displayed from just above black to 100-percent white.

The other “catch,” the differential aging of different OLED colors, has intrigued display analysts like me for years. Although green and red appear to have acceptable half-life spans, dark blue has always been a challenge. LG Display’s technology uses a white OLED emitter that combines two doped compounds. One by itself emits blue light, whereas the other emits yellow light. Together, they create white light, and RGB color filters round out the package.

The combination works very well, although, to boost brightness, LG Display adds a white pixel for every red, green and blue combination. So, even though a white OLED emitter is employed, it still has a blue component to it. And it seems logical that the blue color materials will age faster than the yellow materials will.

I posed that question to Dr. Jang Jin Yoo, who heads up LG Display’s Image Quality Development Department, asking if there was any measureable decay in the blue doped compound over time. His reply was that the white OLED emitters should last 20,000 hours before any such decay might be observed; at that point, the entire OLED array might have reached 50 percent of initial brightness. (And it’s likely that you would have replaced the TV long before then, anyway.) 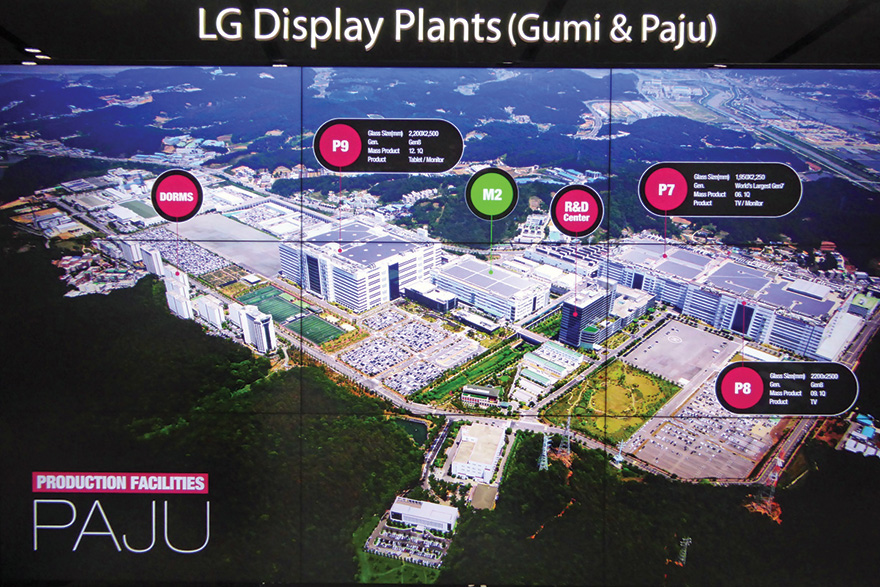 With wider adoption of OLED technology, we are swerving back into the emissive lane. And, if you need any convincing that emissive technology is here to stay, look at the wave of fine-pitch, super-bright, inorganic LED displays now available for large commercial displays. They’ve already put a dent in sales and rentals of high-brightness front projectors, and they’re becoming the preferred backdrop display for TV news broadcasts.

Calm down…we’re a long way off from micro LED TVs in our living rooms! For now, the next best thing is OLED technology. LG Display strongly believes this is the future for displays, and that’s where the bulk of its capital investments are going today. The company expects to finish its massive P10 OLED fab line sometime late this year or early next year, at which point it will be able to roll larger sheets of OLED motherglass and yield more screen size cuts, bringing down prices for mainstream sizes like 55 inches and 65 inches.

Yep, the future is now….