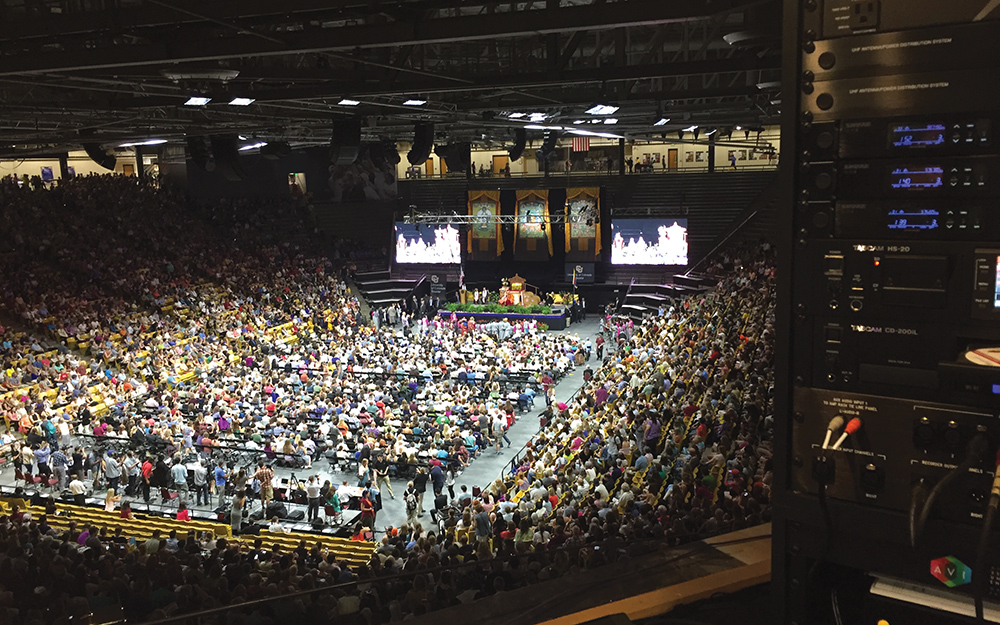 The multi-use facility set up for a graduation program.

Built nearly 40 years ago at a cost of $7.7 million (roughly $24 million in today’s dollars), the Coors Events Center (CEC) on the campus of the University of Colorado Boulder has been through some major upgrades in the last eight years, including a new playing surface, expanded practice facilities, a new video production room, and large video boards and ribbon displays. Yet, even though the venue opened at the beginning of November 1979, the original PA system had never been replaced—until this year.

The CEC has been home to UC-Boulder’s men’s and women’s basketball teams since it opened, and home base for the volleyball program since 1988. For the past two years, it has also housed the locker rooms for UC’s lacrosse teams, which play on the nearby Kittredge Field. In July 2011, the Buffaloes (the nickname for all UC-Boulder sports teams) joined the 10 teams competing in the NCAA’s Pacific Conference, along with the University of Utah, to create the renamed Pac-12.

Originally known as the CU Events/Conference Center, the arena was renamed following a $5 million gift from the Adolph Coors Foundation in 1990. The CEC, which seats 11,604 for basketball and, in 2001 drew a record standing-room-only crowd of 11,363 for a men’s team matchup against Kansas, comprises three levels. A service level, the arena floor and a concourse level that includes the main entrances, ticket offices, concessions and other facilities occupy about 23,000 square feet.

The multiuse arena is open to the public, as well as UC students, and over the years has hosted some notable events. It was the site for the third televised Republican primary debate of the most recent presidential campaign in October 2016. Three years earlier, President Obama addressed the student body at the CEC. U2, Bob Dylan, Stevie Wonder and numerous other major music artists have performed in the facility, including the Grateful Dead, whose last show in Boulder was at the venue in October 1981.

Following the 2007-08 basketball season, the arena floor was replaced with a permanently installed maple surface, an upgrade that eventually would impact the recent sound system installation. Joining the Pac-12 provided the impetus for a string of further improvements. Initially, two new video boards were installed and a studio facility controlling those displays was built for the UC’s award-winning BuffVision production team. The studio, equipped with support from Pac-12 Networks that produce and distributes game coverage via cable television and web platforms, also controls five HD video boards at UC’s Folsom Field football stadium. A new LEED Platinum-certified practice facility covering 44,000 square feet was added onto the CEC in 2011. In the years following, a new video room and a new weight room were opened.

But it was not until recently that the venue’s aging sound system was replaced. A giant, custom-configured hemisphere of components weighing nearly three tons that was welded to the steelwork in the roof above center court, it had served the venue well. But loudspeaker technology has advanced significantly since 1979, most noticeably with the emergence of line arrays in the 1990s. With UC-Boulder now part of the Pac-12, Rick George, CU Athletics Director, tasked Steve Pizzi, Assistant AD, Coors Events Center and Game Day Operations, and Jason DePaepe, Associate AD, Facilities and Game Day Operations, with finding and evaluating a replacement audio system solution for the venue.

Loudspeakers are not the only audio product to have evolved since 1979, of course. Upgrading all the components in the CEC’s sound system enabled the school to also adopt audio-over-IP networking (in this case, Dante) to transport signals throughout the entire building, which in turn also provides a scalable platform for future expansion or changes. UC-Boulder engaged commercial AV solutions provider AVI Systems, headquartered in Englewood CO, to install and integrate the new PA system at the CEC.

Pizzi and DePaepe selected the Bose RoomMatch DeltaQ speaker system after being introduced to the technology at a college facilities conference. Scott Sanders, Bose Professional Territory Representative, and Tom Tyson, Bose Pro’s Chief Field Engineer, worked with AVI Systems and the school to design a system that would accommodate every type of event that the multi-purpose venue might be called upon to host.

Using Bose Modeler, the design team created a virtual replica of the room in software and tested a variety of speaker configurations, and even different seating layouts, in preparation for any potential future changes. Bose Auditioner software further enabled the designers to hear what any prospective speaker arrangement would sound like from any seat in the house.

RoomMatch, intended for permanent installation, is available with a broad range of vertical and horizontal waveguide options that can be combined to create 42 different dispersion patterns. The final design at the CEC incorporates 15 arrays of RoomMatch modules configured from nine different combinations of horizontal and vertical waveguides.
Ten arrays arranged in a rectangle above the court cover the audience seating bowl with two downward-firing arrays providing on-court coverage. In the main system, two arrays facing each side of the court are configured, from top to bottom, with two 70×10 RoomMatch modules to cover the upper seating and with a 90×20 and a 90×40 module below to extend coverage to the courtside seats.

At both the north and south ends of the court is a single array configured with a 90×10 cabinet at the top and three 90×20 modules below. Above each corner of the court, covering the wedge-shaped seating beneath, is an array comprising a 70×10, a 90×20, a 70×20 and a 55×20 module. Two hangs each of two 90×10 RoomMatch modules directly above the free-throw lines deliver audio to the players and officials on the court. A single, centrally located line array of six RMS215 dual 15-inch subwoofers provides low-frequency extension.

A separate five-box array and a small delay array are intended to provide voice reinforcement for events taking place on the stage area at the arena’s north end. The single array is positioned directly above the north end basket and includes two RMS215 subs at the top, with a 90×20, a 120×20 and a 120×40 below. A delay array of two 90×20 modules is flown toward the south end of the venue.

According to Sanders, “Colorado is one of the only schools and collegiate facilities with this type of arrangement. The university wanted smooth coverage throughout the seating area, even tonal balance, a consistent mix and a high level of intelligibility. Once we determined that our technology could deliver what the university needed, we worked closely with AVI Systems and the university project team to finalize the design and make it all happen. This relationship is long-term, based on our mutual desire to install and maintain a premium sound system.”

The Dante network infrastructure extends beyond the arena to also deliver signals throughout the concourse, to concession areas, restrooms and building entrances, as well as to the Hall of Fame area in the practice facility. The network is managed via two 24-port Summit X440-24t switches.

Forty RoomMatch RMU108 two-way surface-mount speakers on a 70V distributed network are installed on the concourse level, in the restrooms, and at the building’s entrances. The system can be fed with the arena audio or a variety of other sources, including pre- and post-game coverage from local broadcaster KOA NewsRadio, prerecorded notifications or emergency messages.

An installed fiber network transports signals throughout the venue where the distances approach the 330-foot performance maximum for copper Category cabling. Within the arena, wall panels around the court are networked over fiber to the control room located on the upper level. Additional input panels are located at the halfway line and at the north and south ends of the court.

Another, larger panel at the north end, where a stage can be temporarily set up, accommodates larger events. The signals at that panel are also accessible from the BuffVision video production studio, one floor below.

Signals from the courtside patch panels are transported to a 48-input Allen & Heath GLD-112 digital audio mixer fitted with a 64×64 Dante interface card in the control room. The school custom-built a console to house the desk and additional local sources, including a TASCAM CD-200IL professional player and a 16-track Allen &Heath ICE-16 Series interface and digital recorder.

In addition to sports events, the arena is also used for a variety of speaking events and presentations, and is available for rent. To cover all eventualities, AVI Systems supplied six Shure QLXD124/85-H50 handheld and lavalier wireless microphone combo systems, which each feature an SM58 wireless handheld and a WL185 lavalier mic with QLXD1 transmitter belt pack together with a QLXD4 receiver. A pair each of Shure UA844SWB and UA874US antennas and PA421A antenna combiners are installed around the arena. Four Countryman B6 lav mics are also available, while a Shure SCM810 microphone mixer adds further flexibility to the setup.

The coaches wanted the players to be able to listen to music while they practice on the arena floor. A Crestron touchpanel with password protection in a lockable box by the north-end team tunnel allows the players to play music through the court speaker arrays from an iPod input without assistance from the production staff.

UC-Boulder, which is renowned for its space sciences, environmental sciences, natural sciences, education, music and law programs, also holds student tests in the arena. As part of the audio upgrade, the school purchased a pair of portable Bose F1 Model 812 two-way flexible array speakers and subwoofers for those occasions, as well as events such as kid’s camps, and for use by the lacrosse and soccer teams on Kittredge Field.

The transition from the previously installed stereo BGW power amplifiers to the more efficient and compact eight-input Bose PowerMatch PM8500N configurable 4000W amplifiers freed up a lot of space in the control room by reducing the number of racks from five to three. The decision to keep the amplifiers in the control room was made partly because the audio engineers are used to having them close at hand, but it also meant that it was not necessary to go to the expense of constructing a platform in the catwalk.

The system is managed and processed using a Bose ESP880 eight-channel digital signal processor fitted with a Dante card. The PowerMatch class D amplifiers are similarly fitted with Dante network cards, as well as ESPLink cards for bidirectional communication with the processor. Using ControlSpace software, the engineers can monitor and manage the system from a touchscreen in the control room. By simply touching the relevant icon, they can turn speaker arrays and zones on or off, allowing them to control how much of the arena is energized by the RoomMatch system, depending on the function and attendance.

With the arena hosting a series of commencements during the installation, the old speaker arrangement (nicknamed The Orb) was left in place while the new speakers were hung and the wiring put in place. There was just one week available in the schedule to remove The Orb and finish installing the new system. Remember the new hardwood floor that was installed several years ago? The surface is a permanent fixture and would be susceptible to damage from any lifts or cranes brought in to remove the old speaker setup. Instead, with the help of a local rigging contractor, a platform was suspended from the roof structure and used to safely lower the old speakers and enclosure.

Since the venue first opened 37 years ago, not only has audio technology evolved but so, too, have sports events. Pizzi has commented that he and the staff are pleased with the improved SPL and clarity of the system, as well as the capabilities afforded by the new speaker zoning and announcement delivery system. But more importantly, now that 21st century sports fans expect more from an event than simply watching the game, the upgraded sound system can finally deliver on those expectations. As Pizzi said, “We’re in the entertainment business now.”