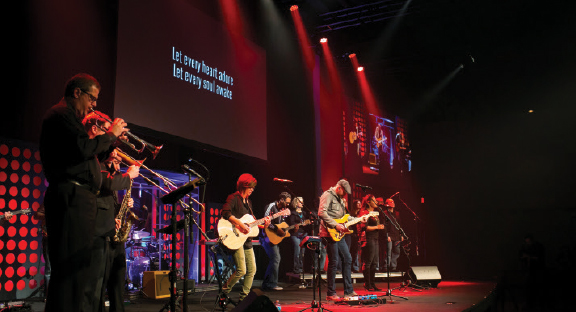 If growth is an indicator, the church is fulfilling its function, and doing it in such a way that leverages technology to help make church fun, friendly and enjoyable to regular congregation members and the unchurched, alike. The newest location in Cypress, a Houston suburb, uses an L-Acoustics sound system, an AVID SC-48 console, projection systems from Panasonic, and a Blackmagic switcher to support communication and worship, which includes streaming services both to and from the original campus on Jones Road in Houston. Systems integrator Elite Multimedia (www.elitemultimedia.com) of Memphis and Nashville TN, designed and installed the audio, video and lighting systems, as well as provided acoustical design specifications that the church then used to build and install its own acoustical panels.

Several years ago, the church began outgrowing its first campus, Jones Road, and launched a satellite location at a local elementary school about 30 minutes away. The church had purchased a contingency of portable audiovisual and lighting equipment in order to hold services in the 250-seat auditorium. The church was packing out every service so, when it came time to build a permanent home, it wanted space for current congregation members and room to grow. “They went on faith and built the place with a 900-seat sanctuary, and two children’s worship centers,” said Elite Multimedia’s Wade Russell. “Their opening service attracted 1200 adults in worship, 400 kids in kids ministry and 200-plus volunteers with 25 people saved in two services. It was totally amazing.”
In the sanctuary, Elite opted for a cluster of five L-Acoustics ARCS II two-way active constant curvature speakers in a mono-hang configuration in the center of the room. “That allowed for great linear coverage from front-to-back and side-to-side for the majority of the room,” Russell said. “We didn’t feel that a line array would fit the space, which has fairly low ceilings, to provide the line of sight and coverage we needed. We kept costs down while providing high-quality speakers by choosing the mono, rather than stereo, configuration.”

Three dual SB28 subwoofers sit center to the room, under the front part of the stage. Dual 12XTI two-way passive speakers supplement the main system as side fills, while four 8XT eight-inch boxes serve as front fills, hidden within the stage.

One LA4 and two LA8 amplifiers, which include onboard DSP, power the system. The system uses Middle Atlantic power sequencing and can be turned on and off in one step with a key-switch.

The rectangular room with low ceilings and multiple hard surfaces could have easily created too much reverberation without the right acoustical treatment. To keep costs down, the church left the concrete floors exposed after applying sealant, and retained what Russell described as “an industrial feel” to the space. “Wrapping those walls with acoustical treatment was critical,” he offered, explaining that church volunteers, headed by Technical Director Andy Sharp, created and placed the panels based on drawings supplied by Elite.

Elite specified an AVID SC-48 digital console for front-of-house because the volunteer tech staff uses the same console at the Jones Road campus, and was familiar with the interface.

The church repurposed some of the Blackmagic video components for switching from the portable church campus. “Using a few distribution and converter boxes from the pre-existing campus definitely saved the client some money,” Russell said.

The video system includes a motorized Da-Lite Cosmopolitan Electrol 65″x116″ center screen, receiving HD content from a Panasonic PT-DW740 7000 lumen projector with a short-throw lens. The projector hides directly behind the main speaker cluster. A Symetrix controller allows the staff to lower or raise the screen easily via an app on an iPad or iPhone.

Two additional 7000 lumen units project onto Da-Lite Perm-Wall HDTV format 65″x116″ screens on either side of the stage. The church uses two Panasonic AG-HPX255 handheld cameras on Manfrotto tripods to capture video in the sanctuary for image magnification (IMAG), or to send a feed to any of the video monitors across the campus or over the fiber line to the Jones Road campus. Either campus is set up to offer live services, play streaming live services or run a recorded message from the pastor.
Each camera includes a seven-inch preview monitor from Ikan, a Houston-based designer and manufacturer of video production support gear. The cameras use a Blackmagic SWTALGP18 tally interface connected to the switcher so that, when the camera is live, a red box appears around that screen. “It was simple to install and easy to use,” Russell said. “It’s a quick and easy way for the camera operator to see which camera is live.”
The Blackmagic Designs ATEM 1ME switcher and Smart Videohub router give the church the flexibility it needs within its budget. “The technical director wanted to put graphics on the center screen and live video with lower thirds on the outer screen,” Russell stated. “He wanted a clean feed going to the main campus.” The clean feed runs out of the AUX Bus on the switcher, feeding the streaming computer linked to the Jones Road campus. The Blackmagic media player within the ATEM 1ME provides the lower-thirds overlay while an iMac running ProPresenter handles full screen graphics. “It’s a pretty complex video system on a small platform, and the church is using it to its fullest extent,” Russell told Sound & Communications.

The video systems also include distributed video to the green room, pastor’s room, conference room, cry room and lobby. A Contemporary Research Q-Mod Box was specified as an affordable solution because the 50-inch owner-supplied LED screens have built-in tuners. “We didn’t have to buy any equipment to convert Cat5 to HDMI. We used RG-6 coaxial cable and just plugged them in.” The church can easily add more screens in the future, just by purchasing a splitter. All of the LED screens can be powered on and off using an iOS device through a Symetrix ARC-2II controller.

The lobby includes eight Electro-Voice EVID 4.2 speakers, with processing, including delay and EQ, accomplished through a Symetrix Edge DSP.

Elite Multimedia also designed and integrated audiovisual systems in two children’s worship spaces, the Blast and the Zone. Each youth worship space uses QSC K12 self-powered main speakers, operated through Soundcraft EFX8 + K US eight-channel mixers. The Symetrix ARCS 2II controller connects to the Symetrix EDGE DSP in the equipment room to power the system on and off. The DSP permits church staff to plug in a microphone and use an auto mix, rather than using the mixer for simple events. The children’s worship spaces include a Panasonic PT-FW4300 4000 lumen projector, a Da-Lite screen and an iMac running ProPresenter for lyrics and graphics. “It’s a simple AV system, but it meets their needs for what they do in those rooms,” Russell stated.

One challenge presented during the design phase involved room placement. The Zone was situated directly next to the main sanctuary, with just one wall separating the rooms. “With a full band and the powerful sound system, we were concerned about audio bleed-through,” Russell said. Making that single wall very effective at absorbing and diffusing acoustical energy was the answer. “It has four layers of drywall spaced a quarter-inch apart, with absorption material inside of it,” according to Russell. “We designed the wall for the contractor to build. In concept, we knew it would work, but it was another thing to hear it. The sound system in the worship center can be turned all the way up, and you’ll barely hear it in the Zone…and vice versa.”

That challenge required creative thinking and ingenuity, but it pales in comparison to other last-minute issues the integrator was able to overcome. Russell counted the tight construction timeline and coordination with other trades as the two biggest obstacles: “We had 11 months from groundbreaking to opening day,” he recalled. “Working with other contractors on a new site is always a give-and-take relationship, and there are always compromises. But we were one of the few contracted firms onsite that wasn’t local, so we had our staff sitting around in a hotel waiting, and we were just losing money every day.”
When it came time to tune the system, there was no power in the building, and there were no chairs in the sanctuary. This required two clever workarounds from the integrator. By bringing in extra acoustical panels and laying them out to simulate chairs, the Elite team was able to get a reasonable idea of what the room would sound like.

However, electricity was even more critical. “Mark Stayton, the church’s Executive Pastor, lined up a CAT generator to power the lighting, air conditioning, sound system and sound board to tune the PA,” Russell said. “Our time frame was locked. The system had to be ready to go.” Ultimately, it was. “The launch was delayed by a month due to the electric company’s schedule, but the first day of services went flawlessly,” Russell concluded.