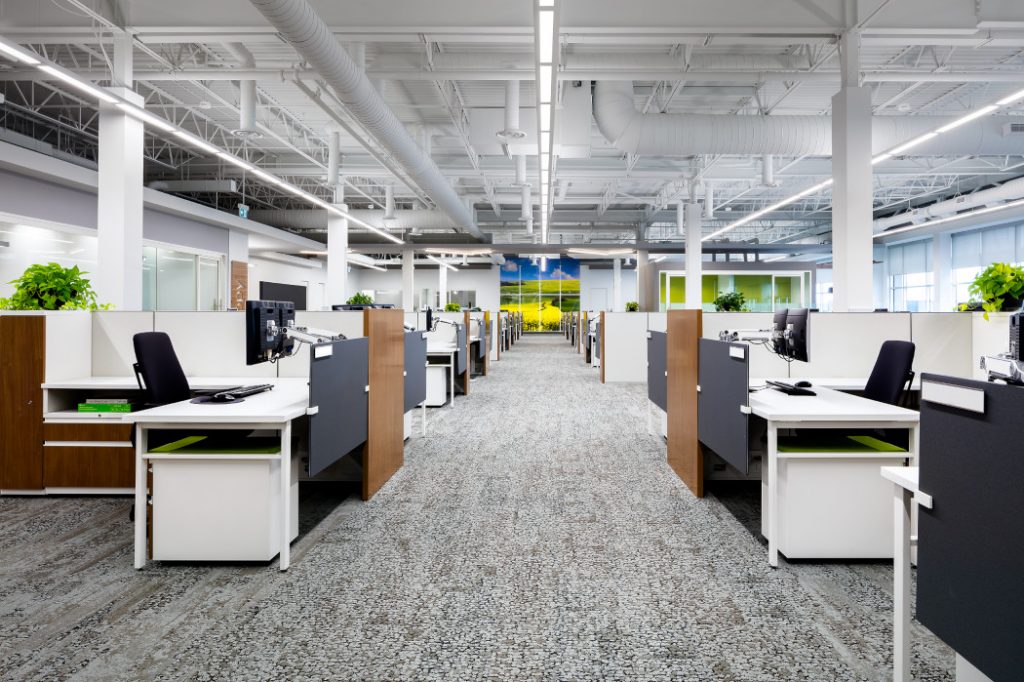 Open-plan space, modular walls and reflective surfaces, such as glass, concrete and metal, are just a few of the design trends making today’s interiors even more dependent on sound masking for speech privacy and noise control. Ensuring that this technology continues to function as expected over the course of its lifecycle involves not only maintaining the health of the equipment used to generate and broadcast the sound, but also preserving the efficacy of the sound itself.

The components used by modern sound-masking systems require little preventative maintenance. In fact, some networked technologies are able actively to monitor for various types of issues and use an alarm (audible or visual) or an email to alert the client to a service requirement. If the system does not provide this feature, it is prudent to check the following equipment on a routine basis (e.g., annually), when work is done within the ceiling space or if an occupant reports a problem:

At this time, also take the opportunity to review and adjust customized settings related to various ancillary components and functions. These include the following:

Although modern sound-masking systems provide networked control over zoning related to the above functions, the system’s design might have to be physically modified in certain cases—for example, when newly constructed walls cross existing masking zones, or when major changes are made to ceiling treatments. In such cases, review loudspeaker placement and zoning.

Returning to the site also provides the opportunity to discuss extending masking coverage if, for example, the client recently expanded its space or initially limited treatment due to budget constraints or more obvious acoustical concerns in particular areas (e.g., an open plan).

In the end, the sound-masking system’s role is to control the acoustic conditions throughout the facility, just as lighting and temperature are controlled. Clients typically do not want dark or cold areas within their space; similarly, they should strive to achieve consistent acoustics, rather than having a low ambient level in some areas and an effective one in others.

Limiting treatment to particular areas also runs contrary to a key design goal: Occupants should forget the masking sound is there. That goal cannot be achieved if there are voids in coverage. People can detect changes as they walk between treated and untreated areas, which can vary by as much as 10dBA to 12dBA. If masking is installed in both open and closed spaces, a uniform level is maintained that, by virtue of consistency, is less noticeable and feels more like a natural part of the space. A less-conspicuous sound can also be set to a level that is more effective.

When properly implemented, a sound-masking system is a key contributor to the overall acoustic performance of open-plan areas, as well as to the speech-privacy levels experienced in and between closed rooms. However, the system cannot achieve those goals from the moment it is powered on. Regardless of the system’s design or the position of its loudspeakers, the sound emitted interacts with the facility’s layout, finishes and furnishings.

To deliver the expected effects, rather than simply introducing a background noise, a trained technician or acoustician must tune the sound so that it meets a specific masking spectrum or “curve.” This goal should be set by a third party, such as the National Research Council (NRC) or an acoustician, rather than being set by the system’s manufacturer. It will typically range between 100Hz to 5,000Hz, but it can go as high as 10,000Hz.

The exact tuning method varies by product, but, generally speaking, the technician should use a sound level meter fitted with a calibrated Type 1 microphone to measure the sound at ear height (i.e., the level at which occupants experience the masking effect), analyze the results, and adjust the volume and frequency settings accordingly. Repeat those steps until the curve is met at each tuning location. System designs that utilize small zones (e.g., zones of one to three loudspeakers) offer more test and adjustment points, allowing the specified spectrum to be more accurately achieved throughout the installation. The more precisely and consistently the curve is met, the better the outcome. For that reason, the specified curve should also be accompanied by a “tolerance” that limits the amount by which the sound is permitted to deviate from the goal across the space.

A minimum guideline is to measure the masking sound in each 1,000-square-foot open area, and each closed room, at a height between four feet and 4.7 feet from the floor, and then adjust within that area as needs dictate. Masking volume is typically set between 40dBA and 48dBA, and the results should be consistent within a range of ±0.5dBA or less. The curve should be defined in third-octave bands. Variation of ±2dB in each frequency band is a reasonable expectation, although it should generally be tighter to meet the overall volume tolerance. After tuning, offer the client a detailed report to verify the results and indicate areas where the sound is outside tolerance and why (e.g., unwanted noise from the HVAC system).

Unlike with older analog masking systems, the output of modern digital systems is consistent over time. In other words, during the system’s lifecycle, it will not introduce variations in the sound; that removes that consideration from the maintenance equation. However, if changes are made to the space (e.g., the layout, furnishings, partitions, ceiling) or its occupancy (e.g., relocating call-center functions to an area formerly occupied by accounting staff), it is necessary to check whether the sound continues to meet the specified masking curve and the client’s needs. Because specialized equipment and training are required, clients should not attempt to make changes themselves; it can be helpful to communicate that the masking curve does not define the system’s volume and equalizer settings, but, rather, the measured output within the space.

If adjustments are not made—or are not expertly handled—the overall volume might be too low in some areas, affecting speech privacy and noise control, and too high in others, affecting comfort. Although occupants can readily identify the latter issue, it is often difficult, if not impossible, to tell subjectively whether the sound is providing the expected level of masking. To make that determination, one has to take measurements. One can usually expect a 10-percent reduction in masking performance for each decibel below the target. Spectrum variations can also mean substantial losses in acoustic control.

Maintaining the masking effect is key to ensuring the client continues to derive full value from its investment, and it is of particular importance in situations in which the system is relied upon to provide speech security (e.g., military environments) or confidential speech privacy (e.g., healthcare facilities), or where it forms the basis of acoustical design.

The likelihood that changes will occur during a sound-masking system’s 10-to-20-year lifespan is almost certain. Therefore, organizations simply cannot take a “set-it-and-forget-it” approach when it comes to the equipment or the sound it delivers. The need for maintenance also highlights the importance of the original design. The system’s layout—in particular, the size of zones offering independent volume and frequency control—will heavily influence not only initial masking performance, but also the technician’s ability to make adjustments easily in response to the client’s diverse and changing needs over time.

For more information about this topic, see this author’s “Reversing The ABCs Of Acoustics: Using sound masking as a design platform” in Sound & Communications, December 2017.