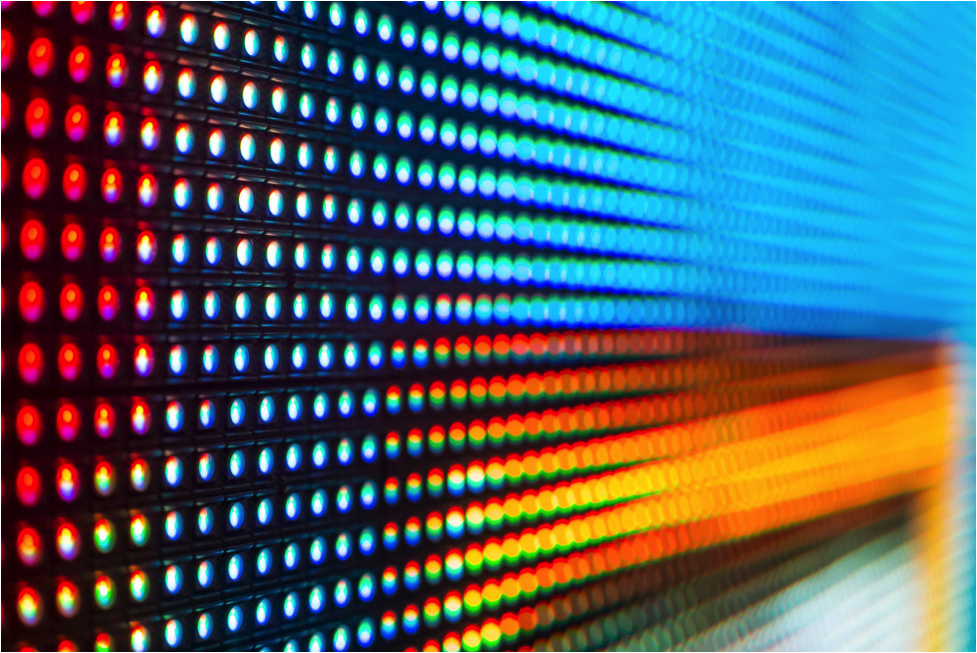 It’s been a busy summer for me, travel-wise. In addition to jaunts through Quebec and South Korea, I’ve been in Chicago IL and New York NY, meeting with manufacturers and checking out the latest in television, projection and large-screen display technology.

Last month, I wrote about my visit to LG Electronics and the company’s deep dive into organic light-emitting diode (OLED) technology. As part of my visit, I saw some clever uses of OLED panels in super-large videowalls mounted conventionally, mounted overhead and even warped around different surfaces.

My trips to Montreal and Chicago IL also led me to inspect numerous and more mainstream inorganic LED wall installations, ranging from the Montreal Jazz Festival to the new block of shops and entertainment venues in and around Rosemont IL, just east of O’Hare Airport.

What boggles the mind is how quickly LED signs have become the dominant display medium, and how they’ve essentially booted high-brightness projectors to the sidelines. I can’t remember a concert I’ve seen this year that used video projection. Either the area behind the stage was filled with an LED wall, or towers of LEDs were arrayed to either side of the stage.

It’s been like that for concerts I’ve attended in recent years by Paul McCartney (twice), The Moody Blues, Steely Dan and Sting. The move to LEDs for image magnification has put a noticeable dent in the sales and rentals of projectors, as many of my colleagues in the industry have mentioned. Although there are still tours that use some complex projection effects—Roger Waters’ various “Wall” tours come to mind—it’s clear that LEDs are the new 800lb. gorillas.

For a festival like Montreal, LEDs make perfect sense. Multiple temporary stages are set up outdoors near the downtown area, and performances run continuously from noon until late in the evening. Ambient light levels are all over the place, and large crowds form around each stage, constraining the available footprint for AV support. Aside from rear projection, direct-view displays make the most sense.

In Rosemont, an area that was supposed to be a casino, nestled between I-294 and the hotels and convention center on River Rd., has instead become a vibrant outdoor mall and concert space, surrounded by restaurants, a bowling alley, an indoor skydiving attraction, a high-end AMC Muvico theater and the headquarters of the Big Ten television network. Across nearby Balmoral Ave. lies the Fashion Outlets of Chicago Mall and Rosemont Theater—all replete with big LED signage.

The fascination with LEDs hasn’t gone unnoticed by the leading manufacturers of LED tiles, most of which are based in China. I noticed at least a dozen LED tile/wall manufacturers at NAB in April, and too many to count at InfoComm in June. The problem is that most of those companies are unknowns to folks in the rental and staging business; thus, the sharper minds are hiring American industry veterans to handle sales and marketing of their products, hoping to get a foot in the door.

I’m also hearing concerns about product reliability, which generally scares away rental and staging folks. The gear absolutely must work Monday morning at 8am when the meeting kicks off, or at 8pm when the house lights go down—no excuses! With projection, stacking redundant projectors might be an expensive fail-safe, but it works. So, too, does having extra lamps in the optical chain—if one fails, the projected images might be slightly dimmer, but the show does go on.

But how do you provide redundancy for LED displays? Granted, the manufacturer can include extra power supplies in case of a major failure. But what if a column or row driver goes out? Driving home last night along a major interstate, I noticed a prominent LED outdoor sign along the road that had a large, L-shaped black area on it. Those tiles had failed completely. Whoops!

It’s rare that imagers fail in high-brightness projectors; more typically, the lamp goes, or there’s an issue with the power supply. But projection technology is mature, as compared to LEDs. The first solid-state, high-brightness projectors made their appearance in the mid-1990s, more than two decades ago, and there’s been ample time to work out the bugs. Yes, LED displays were around back then. However, they had very coarse dot pitches; they were extremely costly to install; and they were limited to venues like stadiums and arenas.

Now, we can achieve 4K-plus resolution with fine-pitch LED tiles that range from 1.8m down to .9mm. That, of course, increases pixel density, wiring complexity and power requirements. The upside is a level of brightness on huge screens that you’d be hard-pressed to match even with stacks of projectors. To equal a 2,000cd/m2 16×9 LED wall that measures 24’x13.5′ (324ft2), we would need a projector stack that could pour out 190,000 lumens. (And likely a separate power plant to operate it, too!)

If the history of the AV community has taught us anything, it’s that any new technology that represents a real breakthrough, failures or not, will win out in the end. And that describes LED walls to a T.

What’s not so great is that they’re falling out of favor for larger-than-life displays, and LED walls are rushing in to fill the void. High brightness, excellent contrast, and color saturation, fine pixel pitches, small footprints, modular design and assembly, and one-piece solutions—these are all substantial advantages as compared to projection.

The sticking points remain product reliability, 24/7 manufacturer support (essential for staging) and customer service in general. And the Chinese LED-wall manufacturers appear to be taking those challenges seriously, based on the flurry of press releases I’ve gotten this year that have announced key hires for their American offices.

If those three challenges can be overcome, I think we all know how this story will end. Projector manufacturers will have to be satisfied with a smaller slice of the pie as we go forward. And it might get even smaller….

Samsung has announced an initiative to place large, fine-pitch LED screens in movie theaters, promising a high dynamic range (HDR) viewing experience that it claims can’t be equaled with projection technology—even those equipped with lasers.

I’ve been in this industry long enough to remember when “state of the art” in staging meant 35mm slide projection, CRT video projection (with standard-def video), and 16mm film here and there…and that was just three decades ago.