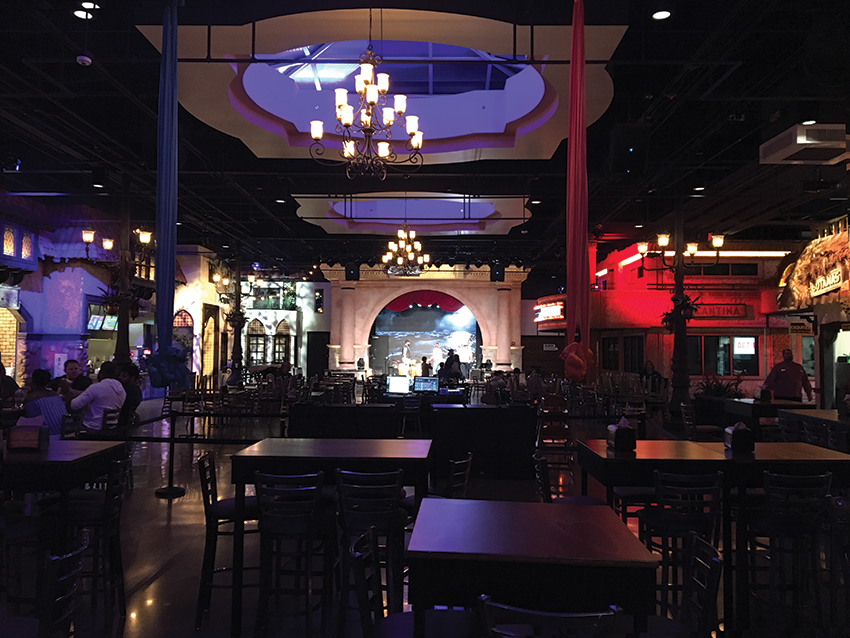 The 60,000-square-foot Plaza Mariachi’s interior is a mix of entertainment, food and retail, with sound and lighting used throughout to ensure visitor engagement.

Plaza Mariachi sat in varying stages of construction for three years, as the hollowed-out cavern of what used to be a Kroger supermarket on Nolensville Rd.—the Broadway of Nashville TN’s robust Hispanic community—was turned into a Disney-esque version of a Mexican town square. Five hallways, each designed to look like a traditional marketplace calle, are populated with Latino restaurants, art, food stalls and retail, as well as professional services like salons and law offices.

From the beginning, however, the focus at Plaza Mariachi was on entertainment. So, pretty much from when the 60,000-square-foot space opens ahead of the lunch rush until it shutters around midnight each night, live music pumps from the sizable stage at the end of a food court whose tables and chairs can be quickly whisked to the side when the salsa dancing starts.

According to Rick Redfern, Senior Project Manager for Southeastern Sound, the audio systems installer on the project, a respectable amount of the venue’s $15 million price tag went to AV. The system includes a flown QSC PA system, powered by QSC RMX 1450a amplifiers, for the main stage; there’s also a distributed sound system for the entire venue, consisting of Tannoy OCV 8 pendant speakers driven by Lab.gruppen amps to cover the interior’s main avenues. Outside, environmental speakers enliven a meandering concrete walkway.

“I was surprised—pleasantly surprised—that they went with some pretty high-end components for the sound systems,” Redfern said. “There is live music almost constantly on the stage, day and night, and they pump it throughout the entire space and outside.”

The main sound system also uses a Bose ControlSpace ESP-880 processor for the crossover to the subs, equalization to the outlying speakers in other areas, switching of sources, and delays between a pair of QSC KLA12 speakers flanking the stage and a similar pair that’s flown about 50 feet further into the room. Low end is pumped through a pair of QSC KLA181 subwoofers, fitted into soffits on either side of the stage; two more are available, and they can be wheeled onto the floor and inserted into the system when extra bass is needed.

A unique touch is the inclusion of vintage White Instruments Model 4400 equalizers, representing a very analog stop along an otherwise largely digital audio signal path. (They are patched around the Bose DSP processor.) Those were specified by Steve Durr, the project’s acoustical and audio consultant. “The White EQs are really the key to the warmth of the system,” Redfern stated. “They were never really studio-level EQs, and they were used a lot in installed and live-sound applications over the years. But they have a very audiophile effect on the sound system.” (Durr, who is also a noted recording studio designer, said he has about 300 of the White 4400 EQ units stashed away. “I buy every one that I can get my hands on,” he added.)

There is a proper front-of-house position, out in the middle of the main concourse. A PreSonus StudioLive AI rack mixer’s operation has been extended to 22-inch touchscreens through a Dell PC connected to the mixer. In addition, a remote iPad option was implemented so the music mixer can check the sound from different parts of the room. Redfern said that was an important point: Although the PA system is well tuned and appropriately delayed, the room is large and has high ceilings, and the floor is highly acoustically reflective concrete. Four inches of International Cellulose K-13 absorptive treatment material was sprayed onto the ceiling girders—enough to dampen the resonance of the corrugated roof that sits atop them.

“That made a huge difference in controlling the sound,” Garrett Hestla, Plaza Mariachi’s Staff AV Technician, remarked. “We realized during construction that that was going to be the main challenge here—reverberation. Between the acoustical treatment and the White EQs, which use cut-type equalization, so you’re actually reducing gain while also tuning the space, we were able to tame it very well.” Serendipitously, the many openings around the main floor area for restaurants and shops also act as diffusion, further evening out the sound in the main part of the venue.

Redfern added, however, that the team was careful in gauging the amount of treatment to be used. “We wanted to leave just enough liveness in the hall, which you need to make the music sound good,” he commented. “Steve had a lot to do with that.”

Durr is folksy, evoking Will Rogers, except he’ll tell you he’s never met a room he didn’t like. “It’s getting the acoustics and the speakers to match it that makes the difference,” he declared. In the case of Plaza Mariachi, Durr said the combination of the QSC KLA12 speakers (they’re similar to the ones he specified for the track sound at the Indianapolis Motor Speedway), the heavy layer of treatment on the ceiling, the White EQs (which, he said, are inserted into the signal chain before the processor and console) and the Bose processor provide the room with the balance of intelligibility and liveliness it needs to be an event space and music hall.

Durr tuned each individual speaker using pink noise in 1/3-octave increments, rather than sweeping the entire system across the spectrum. “I don’t like to use a modeling program or computer-based programs for room equalization, because they don’t take into account the emotional aspect of listening to a room,” he explained. “If a room is going to have music performed in it, then it needs to be listened to first; there is a huge difference between hearing and listening.”

Durr took that a step further at the Madera Café, one of the Plaza’s restaurants, installing some vintage “Voice of the Theatre” speakers in such a way that they can be heard both in the bar and on the restaurant’s small patio. “Sometimes, you have to dig to find the right speakers for each room,” he said. “But, when you do…man…it’s a great feeling!”

Distributed audio, which is sourced from Denon 300Z media players, is mixed through an Ashly Audio LX-308B line-level mixer located in the AV rack at the FOH position. It can function as a true stereo, eight-channel, line-level mixer, or it can be used as a 16-channel mono mixer. Individual retail tenants in the Plaza can access the audio through Bluetooth. About half of the cabling for the venue’s audio runs through conduit under the concrete floor, with the rest running through the open ceiling area. (That there was a RadioShack outlet on the premises of the 40,000-square-foot shopping center that surrounds the Plaza Mariachi site didn’t hurt.)

Plaza Mariachi’s video is centered on a 70-panel videowall, composed of squareV Vi series LED panels, that forms the backstop for the stage. The 7×10 panel configuration is 11.5’x16′ (HxW), and the 3.91-pixel pitch makes it extremely vivid, even when up close. Installer LabeLive, based in Franklin TN, a Nashville suburb, also integrated a Resolume Avenue 4 media server and a NovaStar VX4S video processor. Nathan Tomberlin, Head of Sales and Integrations for LabeLive, said that combination, along with the height of the videowall itself, allows the venue to run an advertising scroll at the top of the screen, while still keeping an accurately scaled, 16×9 image from either the media server or one of the fixed cameras in the house. The processor and server are in racks about 30 feet away from the stage, and they’re accessible at the FOH position via cabling run in conduit under the floor.

“The videowall’s pixel pitch allows for a quality viewing experience from any angle or distance, and it was actually a very simple installation,” Tomberlin revealed. “The only concern we had was that the rear supporting wall was constructed before the videowall was specified; so, we had to be careful about weight loading and distribution on it. But it turned out to be well within the limits.”

Let There Be Light

To light Plaza Mariachi was no small task. Richard Davis, Senior Designer at lighting-design company Ardee Design Group (ADG), said the five hallways that make up the retail and food-hall complex that lead to the main food court and performance area were initially illuminated by commercial fluorescent lighting; it had been installed by electrical contractors before the venue’s thematic concept had been fully formed. “We had to go back, street by street, and change out the drivers and cabling to accommodate more themed lighting for each one,” he explained. “For instance, we had brighter, more festive lights for the Juarez St. hallway to make it look like a market, while Via has more of a subtle, European café sort of look. We also used dimmable LED for all of the lighting—even the ellipsoidals.”

Davis, who has a background in lighting for themed venues, added that the team worked to craft and embed scenic lighting, such as chandeliers behind window façades, into the design; that served to create an immersive sense of different environments. Control over all of that, however, is highly automated and centralized, using the Paradigm system from Electronic Theater Controls (ETC). ADG installed the same platform at the nearby Opryland Hotel complex. The system, which turns itself on each morning and then sets illumination levels according to the time of day, is programmed using an astronomical clock; that allows those settings to adjust seasonally.

That adjustability is particularly important because some of the interior illumination is natural, by way of skylights. However, photocells are also attached; so, if clouds darken the skies, the interior architectural and themed lighting systems will compensate. A control panel in an employee hallway has specialized macros that are programmed for calendar-date events, such as Christmas, the Fourth of July or Cinco de Mayo, as well as one-off events—anniversaries, for example, or the ultimate Hispanic rite of passage, the quinceañera.

Given how complex the interior lighting is, Plaza Mariachi’s stage lighting might seem basic by comparison. The five ellipsoidal and eight profile moving-head fixtures—all LED, as well—that share a single pipe across the front nicely complement the LED wall behind the stage, without competing with it. Stage lighting is controlled through an Elation HedgeHog 4 console. It ostensibly lives at the front-of-house position. However, Ardee cabled it on an Ethernet network, rather than through more conventional DMX control; that allows it to be moved anywhere in the venue, such as the balcony overlooking stage left, where there is an Ethernet connection. That also applies to the Paradigm architectural lighting control system, to which the network, by default, gives preference until stage lighting is needed, whereupon the control systems reverse priority.

“The lighting in the entire place is as automated as we could make it, yet with as many specialized presets as we could think of for them,” Davis said, noting that provision has been made in the Paradigm system to accommodate an ETC Mosaic control for pixel-mapping the courtyard for a soon-to-open fine-dining restaurant. “Lighting is a huge part of the experience here.”

Plaza Mariachi represents Nashville’s ethnic diversity and its heritage as an entertainment destination. And, with four separate technical entities involved in the project, the venue demonstrated diversity on a whole other level, as well. But Plaza Mariachi’s audio, video and lighting (AVL) system also reflects the fact that hospitality, good entertainment and visitor engagement have become paramount in almost any type of destination—shopping, dining, music, etc. Visitors to Plaza Mariachi likely won’t be spending a whole lot of time staring at their cell phones while they’re there.