The most important thing you missed at InfoComm15.

In addition to being an audio and video design consultant, I’m a technology geek. It should go without saying that the annual InfoComm show is a big deal for me and something that I look forward to. It’s not just the gear. In fact, it’s mostly not about the gear. It’s about the conversations with people developing and working with the hardware and, increasingly, the software and support.

These conversations are enormously interesting to me. I’ve grown much more interested in applications and trends than how things plug together. A decade ago, it was mostly about just getting the technology to work. Everyone was in much more of a presentation mindset and you were doing pretty good if you could just get a clean image and intelligible sound.

Today, every manufacturer seems to be pitching that they have some “unique” way of resolving these issues. Yet, when you get down to it, there are more similarities than differences. Why? A dirty little secret that’s not so secret: Virtually everyone is using the same hardware. For example, in UTP video transmission, manufacturers have their choice of HDBaseT chipsets from Valens, Valens or Valens.

This doesn’t mean that there is no differentiation between manufacturers. It just means that the differentiation is increasingly defined by software, quality of support and extra features. To a large degree, the quality of these three components is determined by how well the manufacturer understands its end users. This statement is increasingly true for integrators and consultants, as well.

Take Crestron as one example. Recognizing the increasing oversight of the CTO/CIO as a primary stakeholder in buying decisions for several of their key market verticals, the company has chosen to frame its product offering in a way that is immediately familiar to this group. Crestron offers to increase your warranty, decrease your cost and add other assorted perks if you buy an end-to-end Crestron solution. Not a bad deal. Where do I sign?

Essentially, they are saying “buy everything from us and we’ll be a sole source that guarantees interoperability, reduces points of contact and provides ‘one throat to choke’.” They want to be the Cisco of AV, which is a conversation that resonates with the IT suite. They are wisely framing the conversation in the lingua franca of their market. Crestron has arguably done more than any other manufacturer to push the limits of high-quality video transmission in the AV space. They’re in a unique position to pitch this USP and other manufacturers ignore it at their own peril. 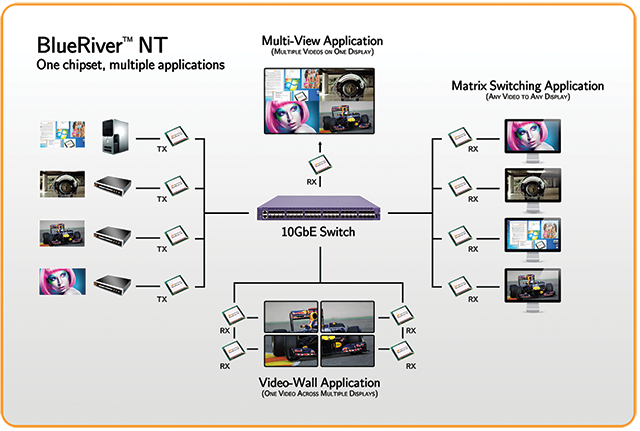 The shift from hardware to software and support isn’t limited to the manufacturer’s sphere. Look at Waveguide Consulting as an example. CEO Scott Walker has spoken at length about the need for the AV industry to move toward a more service-oriented business. More importantly, he has literally put his money where his mouth is, reinventing a consulting business model, based on the actual business needs of his key market segments.

All of these points are at the crux of this piece, but if you’ve already read this far, I suppose it’s time for some payoff on the title. While walking the floor, several manufacturers were displaying new video transmission and routing products that will soon be shipping. All offered low-cost transmission of 4K/60Hz/4:4:4 content. Because they all use the same chipset, I decided to seek out the chipset manufacturer, which was also present on the show floor.

The AptoVision booth provided the answers I was seeking. After an in-depth conversation, the company’s Hardware Designer and Product Manager had to run to another meeting, so I chatted with CEO/Co-founder Kamran Ahmed. All three were extremely helpful in outlining the technology in a way that was refreshingly free from marketing hype.

At its core, AptoVision is using off-the-shelf 10Gb fiber and UTP components to distribute uncompressed video with zero frame latency. This is truly game changing for several reasons, which we will see momentarily. To put this in context, I’ve borrowed a few graphics from the company’s website, which do an excellent job of explaining the compromises that are currently available in the marketplace. First, here is a quick graphic, which summarizes the implementation of the Blue River NT chipset in a typical application.

Figure 1 represents a typical network-based AV solution for compressed video over a switched network. This solution is relatively inexpensive, but does not deliver on the requirements for many installations, in terms of resolution, quality (compressed), frame rate, latency, genlocking, etc. The most common example would be a commodity-priced H.264 installation.

Figure 2, showing the next system type, delivers high quality and all of the requirements for professional application: high-quality video with no frame latency and no artifacts. For applications where quality is the most important consideration, these systems are the mainstay of the AV industry. The problem is that they are proprietary and thus relatively expensive to manufacture.

Figure 3 shows the type of implementation that attempts to lower the component cost of the equipment by implementing off-the-shelf networking components, dramatically lowering the price point.

The disadvantage to the implementation just mentioned is that it lacks many of the qualities that are essential to AV and broadcast installations, such as zero frame latency and genlock capability. The reason for this is that nearly all of these components are built for asynchronous data transfer (because that’s how networks operate). Using these components to transmit video requires frame buffering and re-clocking at the receiving end (see Figure 4).

Stating this in a slightly different way: Using standard networking components in the construction of AV equipment is extremely desirable. Why? Because manufacturers build 100x as much of the stuff for the IT industry, so not only is it less expensive, but it relies on manufacturing standards that deliver much higher reliability for less money. But there have been several problems.

Consider where we are headed: 25Gb, 40Gb and 100Gb networking equipment exists already, and by the time future video standards become popular (e.g., 8K), such equipment will be mainstream. Gone are the days where AV companies will spend tens of millions of dollars (think Crestron’s investment in DigitalMedia) to make custom AV matrix switches capable of handling the required video bandwidth when higher-performance, more scalable, more reliable and less expensive equipment is available off the shelf from companies like Cisco and NETGEAR investing billions of dollars in R&D to solve the same problems.

The problem is that we are trying to leverage stuff that is built for an asynchronous world of data into an audiovisual world, which requires analog (synchronous) signals. AptoVision’s primary IP to get around this conflict is called Adaptive Clock Re-synchronization (ACR). Let’s talk about the value proposition of this technology: See Figure 5. This technology allows the use of the standard 10Gb networking components, in place of expensive proprietary AV routing hardware to achieve 4K/30Hz/4:4:4 video. This has been possible for years using fiber, but required expensive CWDM optics. With AptoVision’s latest technology, even 4K/60Hz/4:4:4 video is possible over a single cable. This is truly a landmark achievement. Most people in the AV industry are probably familiar with some variation of the accompanying diagram (Figure 6).

Sound & Communications’ InfoComm15 coverage continues next month with the conclusion of both Brad Gallagher’s Consultant’s POV and our New Product Wrap-Up, this time covering more than 70 audio introductions.