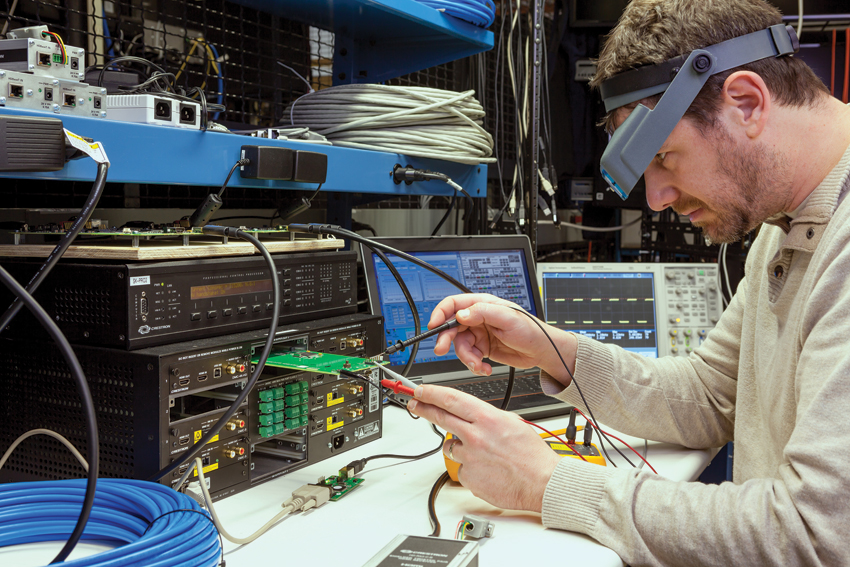 Editor’s Note: At InfoComm in Las Vegas, we were given a brief overview of the Crestron 4K Certified program, which is non-proprietary: They test any manufacturer’s products to ensure that they are truly “4K.” We felt that a “tour” of this facility might give our readers a better idea of what is involved in ensuring that these new products actually work with all of the other elements in the systems. We hope you find this enlightening.

In its earliest days, HDMI appeared as a consumer-focused offshoot of DVI, the first practical format for transmitting digital video outside of the broadcast environment. HDMI carried some advantages over DVI and analog video, but brought significant challenges, too. Suddenly, getting a picture required bidirectional communication. Poor cabling resulted in intermittent or absolute failure, rather than picture degradation. Things were OK in the mass consumer market, where a “complex” system, circa 2008, involved a TV, an AV receiver and maybe two digital sources. Expand the concepts of HDMI to the larger systems in professional AV, and these communication complexities can quickly explode into unmanageable systems. Integrators and consultants saw this, and were glad that HDMI was isolated to the mass market.

But then some CTO got a Blu-ray player at home, and asked his AV department: “Why can’t we have this in our boardroom?”

This is how HDMI got its foothold in the professional AV industry, sometime in early 2009. Perhaps you remember what an awful pain that first year was…I do. At the end of 2008, Crestron shipped the first DigitalMedia system (a new distribution platform based around HDMI signaling) to an industry that, frankly, wasn’t ready for it and didn’t want it: Display and source manufacturers didn’t have good interoperability, integrators didn’t have enough digital installation and troubleshooting knowhow, consultants didn’t yet know how to design digital systems, and DigitalMedia “didn’t know what it didn’t know.” HDMI’s complexity became the enemy.

They say that the pioneers take the arrows, and this was true for everyone who tried HDMI in the professional market in the early days. End users got mad at consultants, who got mad at integrators and they all got mad at me. It didn’t matter if that display didn’t work with that cable box when connected directly. The DigitalMedia switch was the most expensive component, so it took the blame.

Now it’s 2014, and HDMI has become routine in commercial AV. More than 16,000 industry professionals have been through DigitalMedia Certification training. DigitalMedia has been connected to more than two million HDMI devices in real-world systems, and has made every one of those connections work. A wide array of manufacturers build sources, switches and displays that can accomplish the basic task of moving 1080p digital content from place to place.

In 2009, HDMI distribution systems were on the bleeding edge of technology, and their designers knew it. That’s because it was easy to see that HDMI is more complex than component video. Today, 4K is the bleeding edge, but it’s not as apparent because it shares so much in common with the HDMI we already know.

Four times the resolution of 1080p is the promise of 4K. This increase in detail is great for any application where lots of information has to be viewed and synthesized quickly: medical imaging, equities analysis, CAD or even movies at home. However, this level of detail comes at a price. As defined by HDMI 1.4, 4K formats consume double the data rate of their 1080p counterparts. HDMI 2.0 defines 4K formats that consume a full four times the data rate of 1080p. AV infrastructure (HDMI cables, HDBaseT cables, sources, displays, etc.) will struggle to keep up with the increasing demand for bits. Beyond the basic strain on infrastructure, 4K brings new and unfamiliar design challenges of its own, including different 4K formats and the scarcity of 4K downscalers.

HDMI is at the core of nearly every new video system installed today. Crestron sells more than 100 times as much DigitalMedia gear now as we did in 2009. And, unlike the challenges of the transition from component video to HDMI, the challenges of the 4K transition are hidden. We are potentially headed for a repeat of 2009 that none of us can afford.

When we started building 4K products and testing with third-party gear, we noticed interoperability problems between gear from reputable manufacturers, sometimes between one manufacturer’s own source and display. Many reasons for this exist, but the most critical one is this: The HDMI Compliance Test Specification (CTS) does not require full testing at 4K resolutions. Someone needed to fill the gap between “it meets the spec” and “it’s guaranteed to work.” The result is the Crestron 4K Certified program, which tests and certifies third-party 4K sources and displays for use in commercial AV environments.
We’ll detail here how we test displays. The testing rigor for sources is similar. Crucially, we run all protocol compliance and signal integrity tests at each resolution for which the display declares support. There are three key areas of HDMI CTS that we focus on:

This testing is performed with state-of-the-art measurement equipment from Keysight Technologies and Quantum Data. There are only 10 labs in the world authorized to perform HDMI testing, and Crestron has built up the same capabilities as those labs to support our certification program.

The HDMI specification is the critical foundation to ensure that all system components basically work together, but other data is required for seamless and consistent 4K implementation, especially in large matrix designs.

After a device has passed the HDMI portion of our certification testing, it is handed over to the Quality Engineering (QE) lab, where the display is connected to real-world DigitalMedia systems and tested for user-experience quality. This entails using the display as a typical end user would, and noting any anomalies or problems that wouldn’t be caught by HDMI testing. For example, we would note slow or unclean switching, intermittent HDCP failures or audio distortions.

Many of the details checked in user-experience testing do not have designated pass/fail criteria. For example, one display targeted at the digital signage market exhibits switching lock times of upwards of 10 seconds. In your presentation room, this might not be acceptable, but in the digital signage environment, it’s no big deal. In our certification report, we disclose the actual measured switching lock time, as well as any notes on performance when locking onto a new signal.

Crestron wants our certification database to be a go-to reference for system designers. For years, designers have asked for certain third-party performance details, and this program has finally given us the opportunity to provide the data, including:

•    a detailed description of the device’s EDID, including supported video resolutions, preferred timing, allowable colorspaces and supported audio formats.
•    CEC compatibility report, not only whether or not the display supports CEC, but which of the critical CEC commands it responds to.

The average system designer or integrator has no way to gather this information without the huge cost and time of buying lots of TVs and testing for themselves.

Finally, any other unique behaviors—good or bad—are noted. The purpose is to never call out another manufacturer for a glitch or a bug, but to help system designers have as much knowledge as possible in order to design the most reliable system for their customers.

In addition to helping designers, there is a second and, perhaps more important function, to the Crestron 4K Certified program. When a device fails to meet one of our criteria, we do not publish a “failed device” report. Instead, we contact the manufacturer and offer our help to its engineering group to fix the problem. Once fixed, we can certify the device.
Because of our extensive experience with fixing HDMI interoperability issues, rather than keeping that knowledge strictly to ourselves, we share it with our partner manufacturers to help them improve their products alongside ours.

The program represents an incredible investment on behalf of Crestron: more than $500,000 in test equipment and hundreds of hours from the DigitalMedia engineering team. We feel that this investment is worth it to ensure the continued success of DigitalMedia, our customer base and the professional AV market. The ultimate goal of the program is to create a world where all 4K devices interoperate as a matter of course, and 4K certification is no longer required.

To learn about the Crestron 4K Certified program, and to see the list of certified devices and their detailed test reports, go to crestron.com/4k.