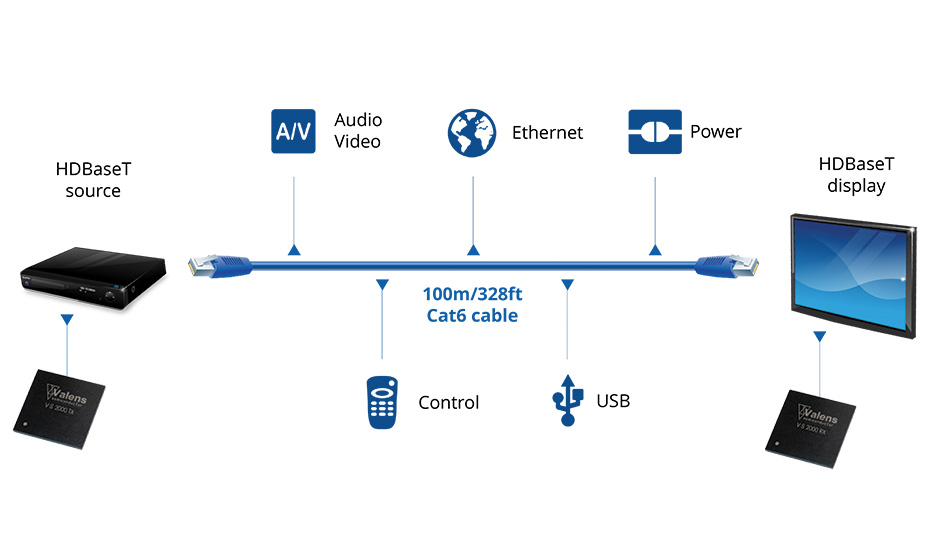 As our lives become increasingly connected and digital, the convergence of AV and IT becomes an essential solution to deliver more bandwidth and better results. The commercial AV industry continues to evolve, and HDBaseT technology is writing the next chapter of wired connectivity.

If you are an AV professional, then it is likely that HDBaseT technology is an integral part of your daily operations and installations. HDBaseT has revolutionized the audiovisual industry by offering the 5Play feature set, the converged delivery of ultra-high-definition digital video and audio, Ethernet, control signals, USB and up to 100W of DC power through a single 328-foot LAN cable, or even fiber for longer distances. More than 180 companies have joined the HDBaseT Alliance, the organization tasked with promoting the technology, and adopted HDBaseT as the optimal single-cable solution for high-quality video transmission.

HDBaseT technology is the ultimate solution for in-room and local distribution of high-throughput content. However, once we must extend content distribution beyond 328 feet, the possibilities offered by an IP solution become an attractive alternative.

The recently launched HDBaseT-IP, an extension to the long-established HDBaseT specification, which utilizes an Ethernet/IP PHY to transmit the many features offered by traditional HDBaseT, maintains the interoperability and backward compatibility expected from HDBaseT.

Every installation has its own demands and requirements, and it is important to understand the potential of, and limitations in, each project. Very often, traditional HDBaseT is more than enough to deliver the expected performance and features. Sometimes, we need to think outside the room, looking beyond what we have been doing up to now.

As a technology, HDBaseT supports a complete ecosystem, with a diverse variety of products that range from extenders to projectors, AV receivers, switchers, matrixes, cameras and so much more. Until now, HDBaseT has mostly been deployed within rooms, or across floors, where distances do not exceed the 328-foot mark.

With HDBaseT-IP, we are expanding the horizon of installation possibilities by extending the existing capabilities of HDBaseT to include scenarios, such as cross-campus applications, in which distances are longer. HDBaseT-IP leverages the existing network infrastructure while, at the same time, maintaining the best possible performance and quality that is consistent with HDBaseT.

A unified hybrid solution, where HDBaseT-IP is merged with traditional HDBaseT, presents opportunities for reduced total cost of ownership. Other AV-over-IP solutions are less optimized for small/mid-size installations (in which the AV sources sit close to the switch), as all interfaces must first be converted to Ethernet. That scenario demands using IP encoders/decoders—an expensive proposition for in-room applications, where native interfaces can be directly connected. Hybrid installations eliminate the need to use encoders and decoders for every device, allowing connection of native interfaces to a regular HDBaseT switch (which has native ports on it), and only employing IP when essential. This is enabled by HDBaseT-IP bridges that allow for seamless integration between traditional HDBaseT and HDBaseT-IP domains, with no loss of functionality or quality.

Another advantage of HDBaseT-IP is high performance at the highest resolution possible, avoiding the deep compression necessary in many AV-over-IP solutions. One of the clear benefits of HDBaseT—whether IP or not—is the ability to transmit high-throughput content with close to zero latency.

HDBaseT-IP is an optimized solution for cross-campus and very large-scale installations, where there is a need for longer distances while maintaining the high performance expected from HDBaseT. Other potential use cases are universities and corporate settings, connecting different buildings and auditoriums. Within each building, regular HDBaseT can be used; when the connection is between buildings, HDBaseT-IP can take over with bridge units. Even large-scale stadiums, sports bars and digital signage installations can profit from the technology’s ease of use and interoperability.

Regardless of the scenario, HDBaseT-IP offers integration and scalability with existing HDBaseT products, and it enables a variety of topologies and architectures, including multistreaming and daisy chaining. HDBaseT-IP also offers unified, end-to-end, centralized system management, control and monitoring.

The ultimate benefit of HDBaseT is that all the different “flavors” derive from the same technological basis; thus, they’re standardized and interoperable. That integration and scalability expands the scope of HDBaseT, as there is a single, unified management system for end-to-end HDBaseT functionality. All flavors support the 5Play feature set (although fiber, by nature, does not support power distribution), and they’re optimized for time-sensitive networks, with near-zero latency, over a single cable.

In this era of AV and IT integration, HDBaseT is well positioned to simplify installations and optimize content distribution.