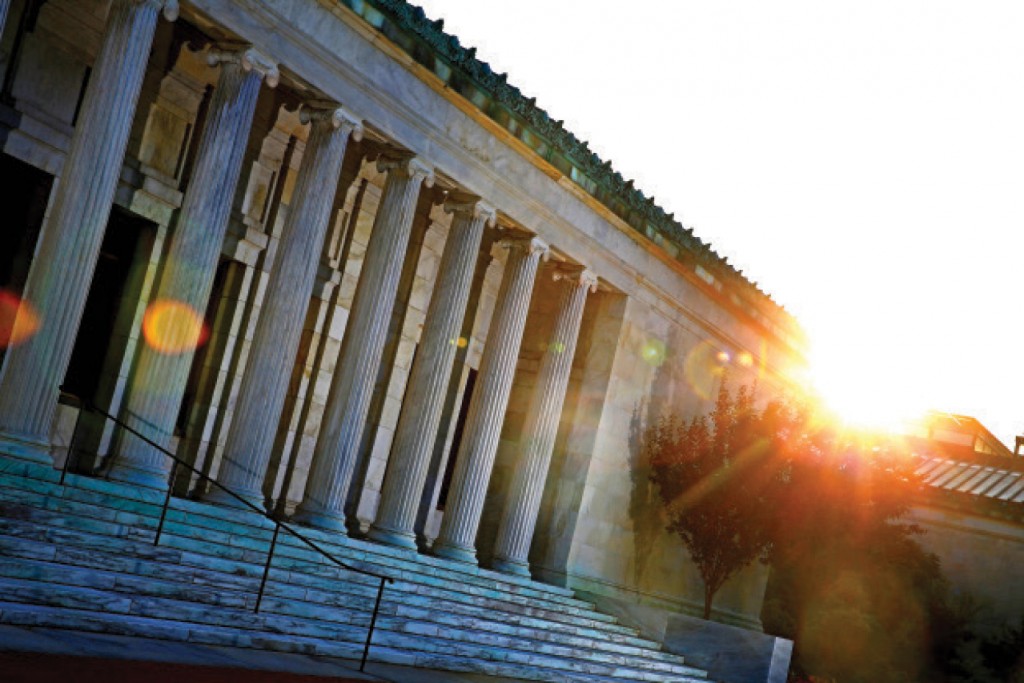 Audiovisual integrators know that “glass” and “good acoustics” are typically mutually exclusive concepts. So, how do you achieve high quality sound in a glass-ceilinged room in a museum in the “Glass City,” Toledo OH? The team of engineers and integrators at Toledo-based Torrence Sound (www.torrencesound.com), led by AV Communications Consultant Don Beyer, figured it out. And the answer was a lot simpler and, at the same time, more complex, than you might imagine.

Torrence Sound was called upon to provide sound reinforcement for the Toledo Museum of Art’s Great Gallery. “The museum is a regular, repeat customer of ours,” Beyer reported, noting that he’s accustomed to the client’s needs for versatile audio that doesn’t mar the aesthetics of the museum.

‘Glass City’ History
Toledo is known as the Glass City due to its history of manufacturing glass for industrial and consumer use, as well as the city’s leadership in the area of glass art. In 1888, Edward Drummond Libbey moved his family’s glass company from Massachusetts to Toledo due to an economic development package and the city’s abundance of natural gas. Libbey hired Michael J. Owens, an inventor and glass blower, as manager of the firm, making Toledo home to two of today’s four biggest names in glass manufacturing: Owens-Illinois Glass Co., Glass Fibers Inc., Libbey-Owens-Ford Glass Co. and Owens Corning Fiberglas Corp.

In 1901, Libbey and his wife, Florence Scott, launched the Toledo Museum of Art, stocking it with some of the world’s best glass art collections. With a glass pavilion and glass ceilings throughout, the museum remains true to its glass legacy.

Yet, modern presentations call for reinforced sound to reinforce the museum’s role as a meeting space within the community, which has led to a number of challenging projects for Torrence Sound. After integrating sound in a room with tiled walls, a tile floor and a glass ceiling, Beyer noted that the Great Gallery’s hardwood flooring, glass ceiling and fabric-covered sheetrock walls, while difficult, didn’t seem insurmountable. However, challenges arose for a number of reasons.

Four Acoustical Challenges
First, using acoustical treatment of any kind was out of the question. With the space being existing construction, there was no way to add any kind of material without changing the look of the room.

Secondly, the integrator had to minimize the visual impact of any speakers so as not to detract from the artwork in the space. The Great Gallery is home to the museum’s European old-masters works. The presence of this artwork also led to challenges when it came to hanging the speakers. “A special team of employees removed all the paintings within a 25-foot area of the loudspeaker installation on the day we arrived to install the speakers to ensure there were no accidents” Beyer said. “We were told just two of the paintings near one of the arrays are valued at more than $60 million.”

The goal of adding sound reinforcement to the space was to draw people to the museum, exposing them to the fine art while attending events ranging from concerts, lectures, conferences, panel discussions, weddings, fundraisers and even live events streamed online, with the potential of a worldwide audience. “The idea is to create a usable presentation space so people are exposed to this great art, which they wouldn’t be in a conference room,” Beyer said.

The fourth, and final, challenge arose when the client told Beyer the museum planned to use the shoebox-shaped room in a variety of orientations. “The presenter will be set up at either end of the room, or on either of the long walls, depending on the event,” Beyer said. This created concerns about sound localization. If Torrence Sound deployed speakers in opposite corners, using both at the same time, half the room would have the sound coming from behind their heads, an unpleasant and disconcerting acoustical experience.

Two-Speaker Solution
With these challenges in mind, Beyer and Torrence Sound Engineer Jason Thomas specified a two-speaker line array system, with Bosch LA3-VARI-BH speakers and LA3-VARI-E expansion modules placed in diagonally opposite corners of the room. Instead of running both speakers at any given time, only one speaker is turned on, depending on the presenter’s orientation. “Engineer Jason Thomas and I decided that, if we put the speakers in opposite corners, there would always be one speaker on a wall common to the podium for localizing the loudspeaker to the presenter,” Beyer said.

Using one speaker also minimizes reflections off the many hard surfaces in the room. Beyer noted that the only sound absorption comes from the people filling the space.
Only Choice

A line array was the only choice for the room, due to the coverage pattern, as well as the slim profile of the speakers. Beyer explained, “The benefit of a line array is that it shoots a laser beam of sound at head level, so we’re not exciting the ceiling and walls as much.
The coverage pattern of the line array is very broad and roughly equal to the height of the loudspeaker. So, it’s shooting a 10-foot-high sliver of sound that’s not going up to the ceiling at all.”

The coverage pattern easily spans the 104-foot length of the room, even when the room is filled to its 350-seat capacity. “We’ve had experience using digitally steered arrays in other venues,” Beyer said, “and the Bosch Vari-B offered excellent speech intelligibility and a small form factor so we could ‘hide’ the speakers from view.”

White cove moldings in the room’s corners provided a logical and natural-looking mounting point for the speakers. Torrence Sound designed and fabricated custom sheet metal corner brackets toggled into the 1×8 wood foundation of the cove moldings. The mounting brackets and speakers were custom-painted to match the trim. “If you have a tall vertical feature, your eye doesn’t notice it because it blends in with the natural lines of the building,” Beyer explained. “The client was happy with that.”

In The Racks
The sound system is controlled via a simple, custom-designed switch that lets the user control power, volume and speaker selection from the rack. The user can choose from one speaker or both speakers to play soft background music from the TASCAM CD200i CD/iPod deck.

A Furman CN1800S power conditioner/smart sequencer turns on the equipment in the rack, which also includes a Shure SCM800 eight-channel mixer. The Great Gallery is equipped with a Sennheiser EW112G3 beltpack wireless microphone system with a lavalier mic, transmitter and receiver, and an EW135G3 handheld wireless mic sytem with transmitter and receiver, along with the GA3 rackmount kit.

Finally, Torrence Sound provided a balanced line-level output to allow for a direct media feed for televised events, giving the Great Gallery everything it needs to serve as a space for community outreach.

Toledo Museum of Art’s Director Brian Kennedy employs a strong philosophy of community outreach, believing the museum should serve the community as a resource and bring people closer together in events that may or may not be related to art. Adding sound to the Great Gallery marks yet another step in that direction for TMA. “They have this large footprint space, packed with glorious art, and now they can do presentations in there,” Beyer said.

For Torrence Sound, the simple sound installation in the Great Gallery is yet another notch in the integrator’s belt in terms of delivering the company’s best for any project, large or small. Although museums may not represent a substantial vertical market in this industry, there is great potential for growth, especially as museums shift to technology-related exhibits. “Digital art exhibits may be part of future plans,” Beyer revealed. “That’s where the medium is going.”

He added, “Once you get into art museums, you can see that they have lots of AV needs, including sound reinforcement and digital signage, as well as requirements for state-of-the-art security systems. There is a lot of potential for an integrator in a museum.”

Dawn Allcot has been a writer in the AV industry and a Sound & Communications contributor for more than 15 years. As a full-time freelance writer, editor and blogger, she’s published extensively in print and on the web. Reach her at dawnallcot@gmail.com.