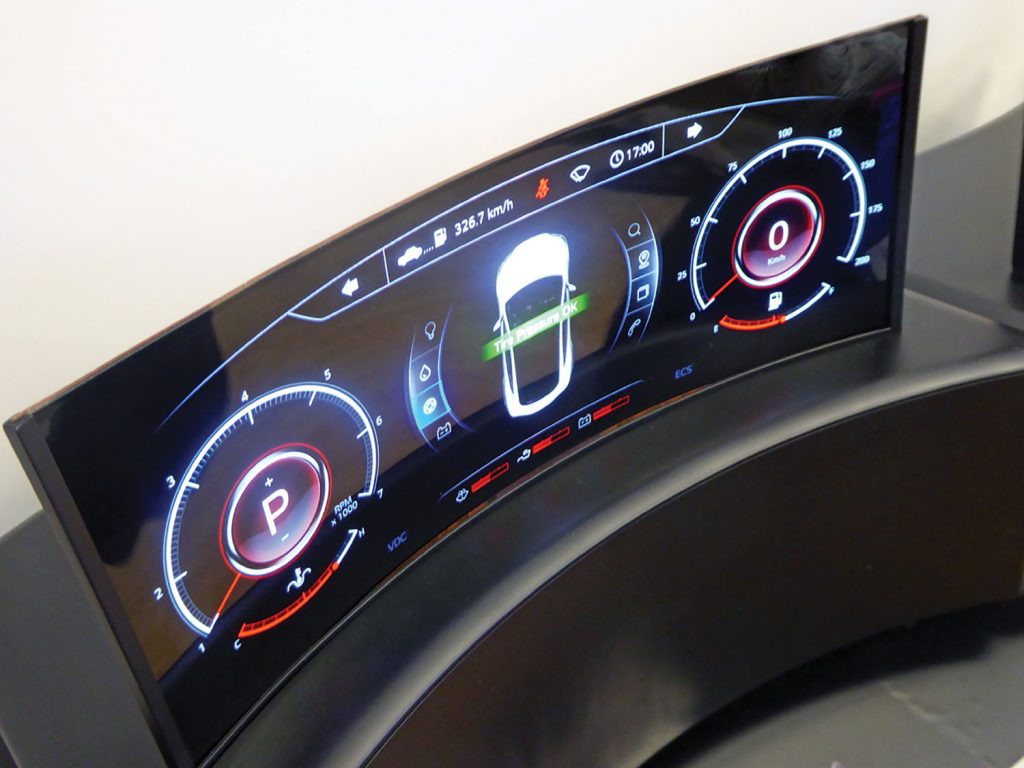 We’ve been hearing about organic light-emitting diode (OLED) display technology for three decades….and it looks like the perennial toddler has finally grown up.

I can’t remember the exact time I saw my first OLED display, but I’m pretty certain it was at a Society for Information Display (SID) show, probably in the mid to late 1990s. And it really wasn’t all that impressive.

Back in the day, more than two dozen companies were actively engaged in OLED research and development. The names stand out as a who’s who of industrial giants: Sony, Toshiba, Kodak, Osram, Samsung, LG Display, Sharp, Epson, DuPont, Philips and Sanyo, plus a bunch of smaller companies you’ve never heard of, most of which were either bought out or shut down over the next decade.

As you walked around the SID exhibit hall, you saw demonstrations of OLED displays in all sizes and shapes (mostly very small). A “large” OLED display back then measured all of nine inches diagonally, and had a maximum resolution of 640×480 pixels.

You also saw OLEDs used as illumination sources. I remember Osram once lighting up half of an aisle at SID with a super-bright white OLED screen, and I’m pretty sure the folks working that booth wound up with trucker’s tans after three days.

Back then, we even had a short-lived format war, with Kodak and other manufacturers advocating for the small-molecule OLED (SM OLED) format against Cambridge University’s polymer OLED manufacturing (P-OLED). The latter process presented the advantage of being able to “print” a display; that is, use a very expensive precision printer to microdeposit the precise amounts of red, green and blue polymer OLED materials on the display substrate.

The Cambridge technology was soon spun off into a private holding company, CDT, that made some noise about being the preferred solution for OLED manufacturing and then eventually faded into the background. Kodak (the company that discovered and patented the small molecule process in a white OLED emitter) entered a period of heavy financial losses and eventually sold its technology to LG Display.

Other players had mixed results. Sony stuck with the program and has offered RGB OLED monitors for the professional video market for several years now. Toshiba largely withdrew as its television and computer business piled up financial red ink, while Samsung began commercial manufacturing of small RGB OLED displays for its mobile phones and tablets a few years ago. (Samsung also brought out a short-lived 55-inch curved OLED TV in 2013 that proved to be difficult and expensive to manufacture.)

Along the way, we saw OLED wristwatches, super-flexible OLED screens, single-color OLEDs for alphanumerical displays, and even a couple of super-sized (back then) OLED TVs from Epson and Samsung, both measuring 40 inches diagonal. Those displays made their debuts w-a-y back in 2002, but also disappeared after a few years. Mitsubishi even surprised everyone with a prototype outdoor OLED videowall at CES about 10 years ago!

Funny thing about OLEDs: Every time the tech press was ready to give up on them, another breakthrough was made. In 2010, DuPont shocked everyone by claiming it had developed new solution-processed OLED color materials that pushed emitter lifetimes to unheard-of levels. Green OLEDs would last well beyond 100,000 hours to half brightness (at 200, 500 or 1000 nits, depending on who you talked to). Red materials would see a similar boost, crossing the finish line at 43,000 hours.

And dark blue, the most problematic (and important) color of all, would see its benchmark half-life extended from 5000 hours to a mind-boggling 38,000 hours. If true, that would have been a major breakthrough, especially for companies that wanted to start using OLED displays in television screens.

Alas, DuPont’s press releases and the subsequent announcement that it would license its chemical process to a “major Asian display manufacturer” also faded into the wind. (I suspect that “major” manufacturer was Samsung, but was never able to confirm it.)

And just like sunspot cycles, the next big thing in OLEDs popped up three years ago, right on schedule. LG showed its first-ever commercial OLED TV: a 55-inch model with Full HD (1080p) resolution. Unlike the same-size Samsung offering, this TV would use white OLEDs with color filters in a red-green-blue-white (RGBW) pixel stripe. The suggested retail price? $14,995.

Today, that identical 55-inch OLED TV is now available for less than $2000. And it’s not by any means an orphaned product: Since then, LG has rolled out several more models of curved and flat OLED televisions, distinctive by their move exclusively to 4K (Ultra HD) pixel resolution.

Another eye opener: You can now buy (as of March) a 65-inch Ultra HD OLED TV for $5000 (curved or flat, black or silver). A 55-inch version will set you back less than $3000, which is what a premium 1080p 50-inch plasma TV cost back in 2007. All of these models use the RGBW pixel stripe and produce deep blacks, super-saturated colors and wide viewing angles, and can also reproduce high dynamic range (HDR) signals.

It would, indeed, appear that OLEDs have finally matured and are here to stay. According to my industry colleague and analyst Ken Werner, $1B of OLED TVs were sold in 2015, based on numbers from IHS. And that drove a 12% increase in demand for light-emitting OLED materials, with total revenues of $465M.

Further proof came in the form of several press releases from the recent Digital Signage Expo (DSE) show, where LG announced it would offer two unique tiled OLED displays, both of which had their coming-out party in the LG Display booth at CES.

The first uses two, three or four 65-inch Ultra HD displays butted together and standing on end, and can show video on both sides using each entire tiled screen, or sections of it. The second is made up of a pair of 55-inch Full HD displays mounted back to back, and the combined screen and frame measures all of 8mm in thickness.

You’ve probably noticed that this discussion is a bit LG-heavy. And for good reason: It’s the only company shipping OLED TVs and large displays right now. It’s been rumored that Samsung will get back into the fray (Samsung did show transparent and reflective 55-inch OLED displays last year in Orlando), and Panasonic is also offering a 65-inch UHD OLED, although the panel is actually sourced from, who else, LG Display.

For fans of plasma display technology, the timing couldn’t be better. OLEDs overcome many of the limitations of plasma because they consume much less power, are much lighter and thinner, and are less tricky to address with video. Like inorganic LEDs, OLEDs have very fast switching times and no lag, so they can refresh at 60, 96, 100, 120 and even 240Hz.

To be sure, OLEDs are switched-current devices with low operating voltages, so some sort of current-limiting control must be included in the display to avoid burnout and premature aging. As far as the old bugaboo of differential aging goes, it would appear that the white OLEDs have licked that problem, with half-brightness predictions at much higher sustained levels and for longer intervals. (I have heard differing accounts, but suffice it to say the expected lifetime is far beyond 5000 hours and in excess of 800 nits.)

Aside from the obvious image quality and viewing angle advantages, OLEDs still concede most of the market to LCDs, which have become super cheap to manufacture in China and come in sizes as large as 120 inches, with Ultra HD and even 8K resolution. So it may be a while before we see OLEDs widely deployed in digital signage.

But the fact that they can be made on substrates as thin as 2.5mm means they can be installed in applications where LCDs can’t, such as convex and concave surfaces. It’s also possible to manufacture OLEDs on flexible films, which can travel rolled up in a tube or bound into a notebook. (Look for the transportation sector to move a lot of car displays to OLEDs by the end of the decade.)

The moral of the story? Not everyone walks at the same speed, but we all reach the same destination eventually. (And we may even find out in the end that the OLED tortoise will actually beat the LCD hare.)