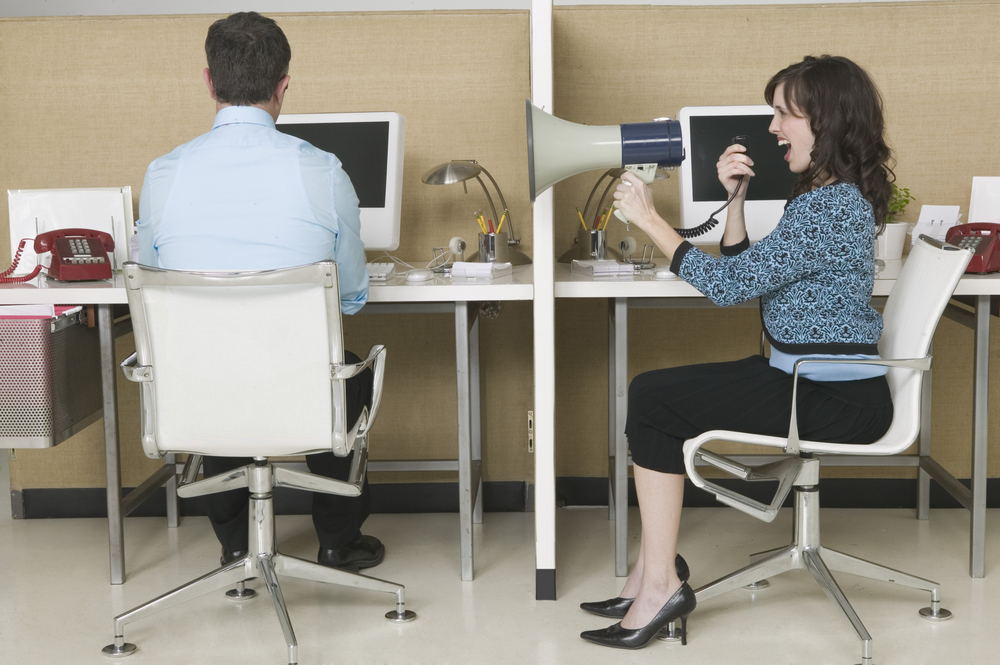 Sound masking as a tool in office design has evolved from being an ugly duckling to becoming an important partner. Its primary function has always been the reduction of distractions caused by unwanted sounds, and the consequent loss of productivity. However, acceptance was slow.

It appears that very early use of masking in the US was to block the sound of noisy dental drills. Later, a number of masking units were made for personal use, mostly at home. Internal fans were the sound source. Later, electronics replaced the fans; see Figure 1 for an example. It provided the choice of white noise, surf or rain, as well as a user-chosen spectrum. The sound was emitted under the unit to provide some diffusion. A number of personal maskers are still on the market today.

Around 1968, the Quickborner Team of Germany planned the early landscaped offices in the US; as a result, sound masking expanded to commercial spaces. The early designs used freestanding panels with lavish use of plants to create an attractive working environment. Then, many of the major furniture manufacturers in the US converted their production to open-office products. Early employee surveys put acoustics (speech privacy, distractions and noise) as the major complaint about the open office. The initial solution was to add sound-absorbing materials—deep carpets, wall panels and furniture panels with high Noise Reduction Coefficients (NRC).

Although those materials reduced overall sound levels, unfortunately, the problem remained. Freedom from distraction occurs when unwanted sound (e.g., speech) is below the background level, which means it is no longer distracting. Sound-absorbing materials are unable to distinguish unwanted and wanted (background) sound; thus, distractions simply occurred at lower overall levels. One approach was to make workstations that enclosed the occupants with raised panel heights to improve both acoustical and visual privacy. That improved matters, but it didn’t solve the problem.

The need existed to change the relative levels of speech and background to create speech privacy. Raising the background sound to an appropriate level with the use of electronically generated sound (now called sound masking) was proposed in the early 1970s. Two responses were predominant from the design community: The first was that sound masking was an excuse for a bad design. The second was a question: “How can you make it quiet by adding noise?”

Those responses were not unexpected by acousticians, because architecture and design schools did not emphasize the role of acoustics in offices. Early masking systems were not helpful in persuading facility managers to use masking, either. Installers added broadband noise (commonly miscalled “white noise”) to face-down paging speakers. Many employees complained of “static” in the music/paging system. Other early systems were small boxes that generated broadband sound with spectra that could be annoying.

The General Services Administration, Public Buildings Service (PBS-C.1, 1972), retained Geiger-Hamme Laboratories of Michigan to write a standard for the acoustics of open offices. It included the sound loss associated with room materials and geometry, and it added the requirement for sound masking to achieve acceptable degrees of speech privacy. The standard was called Speech Privacy Potential. It was specified that masking speakers be placed in the plenum above the suspended ceiling to create a relatively uniform sound level in the office below. During that time, a number of companies were formed to specialize in the manufacture and installation of masking systems.

The Herman Miller Research Laboratory had early versions of panel-mounted masking systems. Ceiling manufacturers became involved. Armstrong developed a highly absorbing fiberglass ceiling tile, and one where the ceiling tile was also a source of sound masking. Owen Corning developed similar ceiling tiles, but recommended that masking speakers be placed in the ceiling plenum. Later office designs placed masking speakers in other places—in a plenum with no suspended ceiling, above a discontinuous suspended ceiling and under a raised floor.

Over the last 40 years, the number of commercial sound masking applications has expanded from open and closed offices to private and public secure facilities, to medical facilities of all types, to courtrooms.

Consultants and masking specialists have generated a number of performance advances. Rules for installation, location, performance evaluation, preferred masking spectrum and level have been developed. Manufacturers have made significant improvements in the performance and versatility of their equipment. Masking systems now are exceedingly reliable, and they can handle masking, paging and music with the same equipment. There is software available that permits acoustical evaluation of a design prior to office installation to avoid failure to meet privacy goals.

The number of masking system manufacturers has increased, making the market more competitive. Most have broadened the capabilities of their equipment. New systems can raise initial masking levels slowly, over several weeks, to increase employee acceptance. They can also do the same in a shorter time when recovering from power failures. Most can automatically adjust the masking levels, through preprogramming or actual level monitoring, as a function of time of day. That is done to accommodate the change in privacy needs as the population changes. Some manufacturers produce a masking sound that inhibits listening devices from detecting confidential conversations. Most systems now have the ability to control individual speakers remotely, so rapid adjustments can be made without expensive service calls.

Recent open offices have created a challenge for sound masking experts. The change to low panels—or even no panels at all—and the elimination of enclosing workstations has exacerbated the distraction and speech-privacy problem for employees. In some cases, sound masking is being used as the sole critical factor in those offices.

Reduction of distraction is determined by three factors: (a) how loudly, and in what direction, people speak; (b) how much speech is lost en route to an inadvertent listener; and (c) how well the masking covers the speech at the listener’s ear. Employees can speak at normal or casual levels. The former is intended to project the voice, whereas the latter is intended for nearby persons or a person over a telephone. Figure 2 shows the impact of the two levels on surrounding listeners, derived from a computer model. In the model, a seated talker is facing to the left, and each ring is a five-foot increment. The model used an NRC=0.55 ceiling tile, a wear-resistant carpet and a 46dB(A) masking level with a spectrum that meets the ANSI standard for a “neutral” spectrum. The curves are the boundary beyond which the Articulation Index drops below 0.20 (Normal Privacy). The larger curve is that for normal levels and the smaller is for casual levels, which are the most common in these offices.

The largest distance (facing the listener) has been called the Radius of Distraction. The area within the curve may be called the Area of Distraction. For normal voice levels, the area was about 875 square feet, whereas, at casual levels, it was nearer 115 square feet—a significant and important difference for completely open offices. The area for female voices is smaller.

The result shown is applicable to call centers, where the direction of speech is reasonably defined. In tabletop workstations, the area is best defined by the Radius of Distraction, because the talker can face any direction. For the case above, the distraction areas are much larger—a big difference in the number of people impacted. Another result of this analysis was that there was no benefit in using highly absorbing ceilings in these offices, because the direct sound path from talker to listener dominates.

In summary, sound masking has evolved from what had been considered a necessary evil in the open office to a critical, but nevertheless challenging, solution.