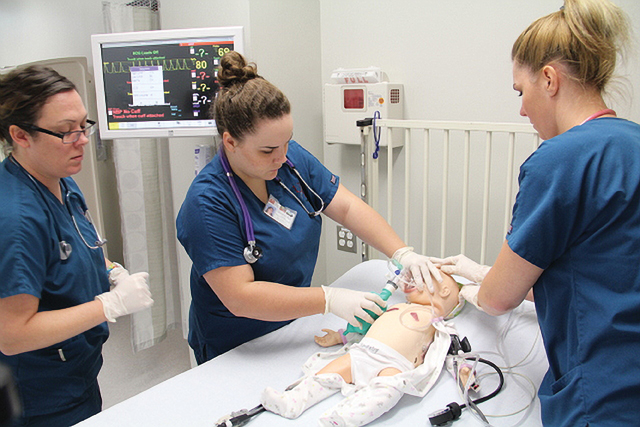 UALR nursing training simulator’s AV is as high-tech as the mannequins.

The last thing you want to hear medical professionals say is, “Let me try something new on you.” It’s generally the last thing they want to do, too. Fortunately, patient simulator technology has become almost Disneyesque in its realism, offering medical students the opportunity to learn on extremely lifelike mannequins that act and react with remarkably realistic mannerisms.

High Tech Mannequins
At the Simulation Lab at the University of Arkansas-Little Rock Department of Nursing, they’ve taken the physical context of that equation to a new level. In a 9500-square-foot space, the school created six- and four-bed simulated patient surgical suites, for a total of 22 beds, occupied mainly by high-tech mannequins (and the occasional live actor trained to act out particular psychological afflictions). These training rooms have AV systems as sophisticated as the mannequins that students are working on, recording HD video and audio via a pair of cameras: a fixed Vaddio ClearVIEW HD-19 camera above each bed and a PTZ version at its foot at ceiling height, and one Shure MX202WP/S hanging microphone per bed.

The input from these devices, as well as patient-monitoring data, is encoded in real-time by an SVSi VMT-105-I encoder and captured by an SVSi network video recorder, then combined using an SVSi Windowing Processor, using SVSi’s JPEG2000 codec, and transcoded onboard the NVR to a MPEG4 format for archival to third-party network-attached storage. The video and its embedded audio can be monitored in real-time in the control rooms, as well as called up immediately in one of several debriefing rooms used for instructors to review students’ performance with them.

The Debriefing Room
That last application is the single most important one, offered Jeff Carmack, Assistant Professor and Director of UALR’s Simulation Lab. “Learning doesn’t actually occur during the simulation,” he said. “We may invest as much as $70,000 in a high-tech mannequin, but the learning doesn’t occur there. The real learning takes place in the debriefing room.”
There, said Carmack, a former EMT who became an RN and is now preparing for his doctorate in nursing on simulation fidelity, students get to see and hear what they just did. The epiphanies they experience as they watch themselves in action can be more revealing and intense than any pedagogy. “That’s where they’ll see that they forgot to wash their hands, or hear a tone of hostility in their voice toward a patient, or talk about the patient to another student as though the patient wasn’t in the room with them,” he explained. “You see the reaction on their faces when they see themselves injecting ten milliliters of morphine instead of ten milligrams, as they were supposed to. The real learning comes from watching their own mistakes.”

It’s also where quality video makes an enormous difference. Carmack noted how HD video allows the critical color of a syringe, which determines its use, to show up on the screen. He almost cringes when recalling that the original plan for the new simulation facility called for standard-definition video. Fortunately, the transfer times for the video in that resolution were as much as 10 minutes between recording and playback, far higher than the three minutes or less that Carmack said it needs to be so students don’t begin to rationalize their mistakes by talking amongst themselves. Carmack and others from the school did site visits, including several of the four other medical facilities done by integrator Curtis Stout AV (www.chstoutav.com), which would become their partner in the project. As a result, they chose the SVSi high-definition video system, which addressed that issue, he said.

In the two debriefing rooms, instructors access video from the SVSi management server via wall-mounted Crestron TPMC-V12-WALL-W touchpanels, which are viewed on LG 55LS460E displays mounted using Chief KWP110B wall mounts. Crestron TPMC-4SMD-B-S wall-mounted touchpanels are also installed in each simulation room to enable students on their own time to record their procedures, to validate their skills to instructors.
‘Environmental Fidelity’

HD video is critical to achieving what Carmack calls “environmental fidelity;” the ability to be able to see the exact values on gas controls and other standard components of the hospital rooms that the SimLab is recreating is at the heart of this teaching approach. (The actors who sometimes portray what are known as “standardized patients” undergo 12 hours of training for “performances” that might last 20 minutes with a student nurse.) A high degree of verisimilitude is also necessary because the instructor is not in the room with them at the SimLab.

“[Students] need to feel that they are completely on their own, without the ability to turn to an instructor to ask a question,” said Carmack. “They have to rely on their own knowledge to show proficiency.” It’s like a flight simulator, he agreed, with instructors in the control rooms remotely programming changing scenarios into the mannequins (newer-model mannequins are fitted with USB ports; older ones have serial ports). “The whole point is to let them experience the moment on their own.”

Curtis Stout has a portfolio of medical AV environments in Arkansas, at Harding University Center for Health Science, UAMS Clinical Skills, Arkansas Children’s Hospital PULSE Center and Jefferson Regional Medical Center Nursing School. However, the UALR project was the first time they had designed a system to support high-definition video and computer signals.

Carmack and Curtis Stout Project Manager Duncan Lang, along with Mark Chard, Curtis Stout AV’s Managing Partner, said that the move to HD video was one of several made jointly among integrator and client. “We both had a pretty good idea of what we wanted and what we didn’t want,” said Carmack, who added that his own experience in simulation environments taught him not to position the fixed camera in sim rooms at the head of the bed. “The IV pole inevitably gets in the way,” he said. (The fixed camera is installed above the bed and the PTZ is at its foot.)

The Long And The Short
The UALR project was all about wire—the long and the short of it. Duncan Lang, the Curtis Stout AV field engineer who was also the integrator’s project manager, cannot recall exactly how much of the Liberty Cat6 cabling they ran as the signal transport backbone throughout the 22-bed, three-control-room complex, other than to say it was “enormous,” and made even more extensive with a nearly equivalent amount of that cable run dark in anticipation of the SimLab, thus doubling its bed capacity in the future. At the same time, they positioned the 22 SVSi VMT-105I media encoders so the local cable runs for each were between three and six feet long from the encoders to the AV devices. Long-run cabling back to the control rooms and the head end were laid in cable trays installed by the general contractor and intentionally shared with the university IT department’s network cabling, in part to conform to HIPPA patient-information confidentiality regulations.

“The school is working on a universal cabling system so, in collaboration with the person at the school responsible for their network wiring, we ran our cables in the same trays, isolated from theirs with a physical barrier between them,” Lang explained, a protocol he says is becoming more common on high-end projects. “You can do that when the system is digital, as this one is, because you can get a lot of data down a smaller number of wires than with an analog system.”

Each side of the building, which is divided by a long hallway, has its own control room, called an observation station, covering the beds on its side of the floor. These are fitted with 11 ASUS 21½-inch video displays that are each dedicated to the combined video feeds from the cameras above each bed, listening through EVID C4.2 ceiling speakers, while vital-signs data is played back on a laptop in the room. Any of the video channels can be routed to one of two LG 32-inch displays mounted above the row of smaller monitors. All of these signals come into the observation rooms as a single multiplexed signal and are demuxed by SVSi VRR Series decoders. Instructors monitor the activity around each bed invisibly, moving the PTZ camera as needed across the upper half of the mannequin’s torso as nursing students work on it. Using Telex headsets, they can talk directly to students in any room on their side of the building.

The main control room, located across the hall from the head end, uses a Crestron V12 large-screen touchpanel to call up any live signal from any of the 22 beds on one of two Sharp 39-inch displays (the other is used to monitor the hallway through a Bosch surveillance camera) or any archived video. Archiving is an automated process, thanks to what Lang calls intricate programming of the SVSi system by Curtis Stout AV’s lead programmer Wesley Hopper, who worked in conjunction with SVSi’s technicians throughout the project. They customized the firmware as UALR’s needs evolved, and provided the recording devices with upgraded processors to handle the massive nightly file conversion to the MPEG4 format, which was required for a nightly file push to a UALR permanent server archive that allows viewing of archived sessions from satellite campus computers with approved access.

One bit of functionality that Jeff Carmack wished for (the ability to digitally bookmark specific points on the video recordings to be able to go back and hit them later) wasn’t available at the time, though Lang said that he and SVSi’s technicians are working on adding the capability as a future software update.

What was available though, in terms of the technology and the know-how, was remarkable, said Lang, who credits Carmack’s thorough research of the issues involved in taking this SimLab to the next step for streamlining what was a collaborative effort, even more so than the typical integrator-client relationship on a complex project. “It definitely helps when we’re all talking the same language,” he said.

Dan Daley is a journalist who has covered the confluence of technology, business and culture for almost 30 years. He has also been a successful composer and recording studio owner, and authored the book, Unwritten Rules: Inside the Business of Country Music.