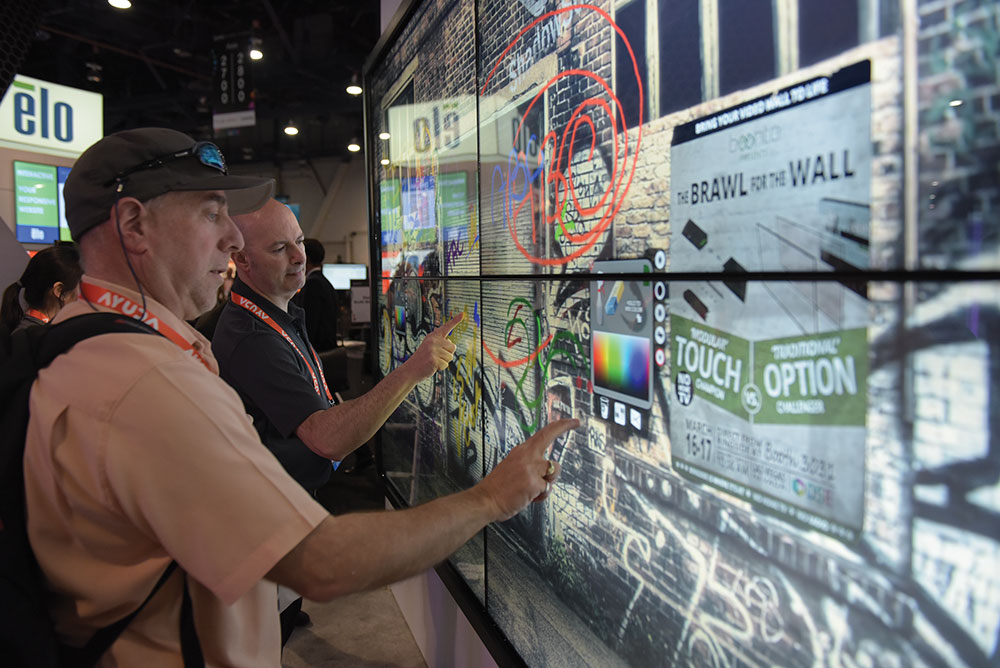 Getting up close and personal with today’s technology is one of the benefits of attending the show.

We all want to have that “Wow!” moment when we’re walking the DSE show floor. The manufacturers we encounter there want us to have one of those moments when we see their new products and features, but sometimes they are left standing there, waiting for a reaction. I believe that this happens when a representative of a manufacturer isn’t in touch with the industry and doesn’t realize that the features or products they are describing so passionately to you are already duplicated 10 times over in other solutions. So, you give them the nod of approval and keep the conversation going. Few and far between are those booths where you see a new solution to a problem, or a new feature that is really outside the box, and you just have to say, “Wow!” to placate them.

In this industry, there is so much parity. I believe this is because there are so many good choices. There are more than 600 content management systems (CMS). With that many on the market, it is hard not to have a lot of duplication of features (zones, layers, scheduling, HTML5 support, etc.). It doesn’t mean that they aren’t “cutting edge”; it just means that there are a lot of companies going in the same direction. Just as with commercial displays, there are many choices for thin-bezel LCDs or laser projectors…there are just a lot of good choices!

Unfortunately, I went to many CMS booths this year at Digital Signage Expo and was underwhelmed. The representative would give me the spiel and wait for my “Wow!” reaction. I would stand there and play the mental game we all play of comparing what I saw at the last booth to what I had just seen, and think to myself, “Was that it?” Most of the time, what I saw in one booth was comparable to what I saw in other booths.

So, if there weren’t many standouts, what is the bright side? I look at it like this: Because many of the CMS solutions are so much alike now, it is hard to go wrong. There are so many good choices! For your basic, everyday, dynamic digital signage, most of the players can make the cut.

Choosing One Over The Other

What are the few reasons you might choose one over the other? As I said, today there are few differentiators. Many of the solutions can do the same core things…just in different ways, using a different GUI. So here is my short list of some of the differentiators you might find: cost/discount level, interactivity, videowall syncing/scaling, data integration and IT tools, collaboration, manufacturer support, and the relationship with the vendor. These are some of the most important things I pay attention to in a CMS.

Of course, there were some standouts this year in terms of new features and solutions. One of my biggest “Wow!” moments occurred at the LG booth. I had not seen OLED on display on such a grand scale before. The possibilities of this self-emissive technology are extremely exciting! When this display technology hits mainstream, we will no longer be worrying about display depth for ADA (Americans with Disabilities Act) requirements or if the wall can support a large display. Take it one step past that and recall that OLED is bendable, which LG was also showing at its booth. If that doesn’t excite your inner AV Techie, I don’t know what will.

My next “Wow!” moment was at the Barco X20 booth. As they demonstrated their newest release, I began to see that this is more than just a CMS; it is a collaboration tool. You can share any of the channels of dynamic digital signage content live across two screens and annotate from each side to the other. Imagine if this were two managers discussing and collaborating in real time, over data from a dashboard running on a channel in the signage. This feature had some pretty forward-thinking possibilities. I think we will see more collaborative features in dynamic digital signage in the near future.

One of my last big “Wow!” moments was at the Planar booth with its direct-view LED displays. It is hard to believe how far LED displays have come. They were showcasing LED displays with a pixel pitch going down to 1.2mm. The picture was beautiful and bright, as LEDs usually are. Soon, we will be able to use these indoors in areas of great ambient light in place of a traditional LCD and not worry if the displays are in the path of the sun.

“Wow!” moments can be hard to come by these days in a rapidly advancing industry, in which Moore’s Law, that computing power tends to approximately double every two years, seems to hold true. Seeing bigger and better each year is more often an expectation than a surprise. So, what will make us say “Wow!” next in this industry? I can honestly say I can’t wait to find out! I hope you’ll join us next year at DSE (March 28-31, at the Las Vegas Convention Center), and I have faith you will find your “Wow!” moment.

Previous ArticleDSE: The Views Are Beautiful, But The Potholes Are RealNext ArticleRS232 Overload