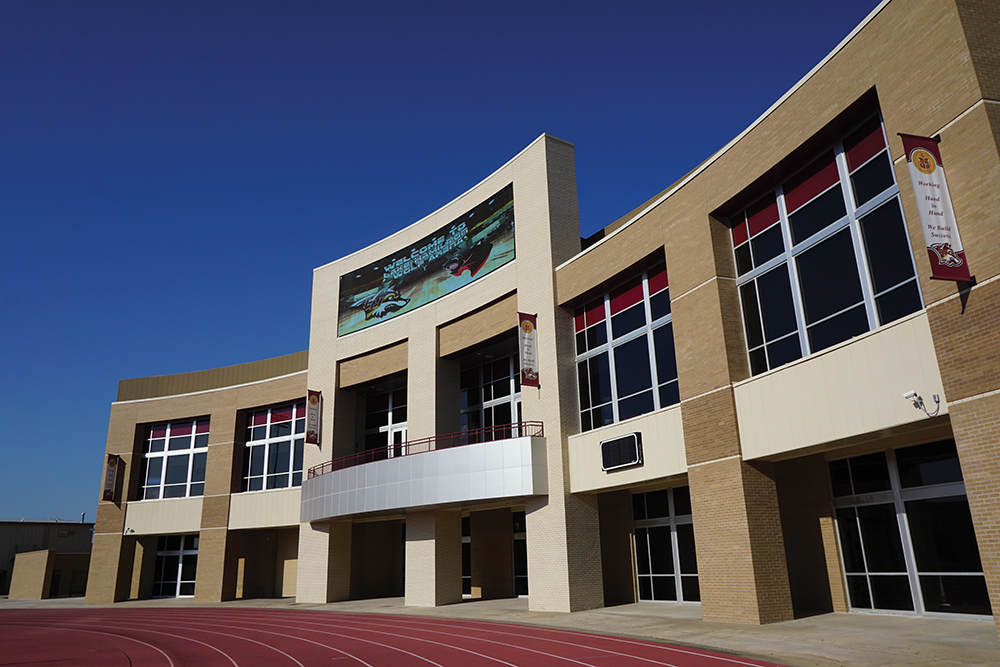 The stars of Friday Night Lights were the high school athletes, but the main supporting character never won an Academy Award: Ratliff Stadium in Odessa TX, where the 2004 movie (which did win an ESPN ESPY Award) was shot. But a lot has happened since then, and that sports venue might pale compared to what the current crop of high schoolers (and their parents and alumni) have come to expect from sports facilities. As Sports Facilities Management, a Clearwater FL consulting firm, stated in a white paper earlier this year, “Gone are the days of dusty ball diamonds and patchy soccer fields meeting the expectations of these athletes and sports parents.…New youth and amateur sports venues must be built and managed with a multi-generational customer in mind to be successful.”

That sentiment seems to have been taken to heart at the Lake Hamilton High School in Pearcy AR. The new 91,000-square-foot, 2200-seat Wolf Arena (named for the school’s teams) that opened in this suburb of Hot Springs to host the school’s basketball team, as well as graduations and other productions, has the kind of video ubiquity that millennials and their parents have come to expect. The arena itself has eight 60-inch and two 65-inch LG LCD displays mounted in various team rooms, conference rooms, weight-training rooms and a VIP suite. Most of the displays are controlled via RS232 ports and Extron IPLTS1 network controllers that allow the school’s single AV manager to turn them on and off remotely from a single location over the Ethernet network that was installed as part of the arena’s infrastructure.

“There’s definitely more video throughout the facility than you’d find in a typical high school sports facility,” observed Clayton Vaden, a principal in Lewis Elliott McMorran Vaden Ragsdale & Woodward, Inc., the architectural engineering firm behind the building’s design and the extension of video and audio to the school’s existing football field, which also had a new concessions building added.

Vaden agreed that the AV-centricity of the new arena is collateral to the generation now inhabiting it. “Millennials are used to having video everywhere,” he said. So it’s not surprising that video was included in the additional rooms that became part of the arena during its design phase, including coaches’ rooms. Enough so that they looked for efficiencies where they could find them, including perhaps the biggest one of all: positioning the new 42’x12′ curved video scoreboard on one exterior wall of the new arena, where it overlooks the football field.

But he’s also aware that any sports venue, including those built on high school campuses, also have entertainment responsibilities. Those are reflected in lighting fixtures like the eight Elation Platinum LED spotlights and ETC Nomad lighting controllers, which would not be out of place in a theatrical setting, and the Community R-Series sound systems that extend from the arena and its R.5 speaker enclosures to the football field and its new R.2 speaker system.

“They found money in the budget for moving light fixtures, something a high school might not have done just a few years ago,” said Vaden. “Those really add a lot of functionality in terms of making the arena a multipurpose space,” for sports, event production and even as a teaching environment for the school’s media classes that teach students how to operate much of the AVL there.

AV Is Part Of The Attraction

American AVL, based in Ruston LA, installed most of these systems. Lake Hamilton High School was a good fit with the company’s portfolio of education, government and house of worship projects. According to Vaden, the architectural firm brought them in to consult on audio and acoustics, and the mandate expanded from there. American AVL President Gwin Edwards also noted that this project had more audio, video and lighting than most high school sports venue projects, but he also understands the economic basis for it.

“The AV is part of the attraction for students, parents and alumni, which is how these facilities are initially financed,” he explained. “It helps market the idea of the arena to the community and brings families to the area. AV gets people interested.”

Edwards offered that the project presented several challenges, many related to supporting the idea of a multipurpose facility. For instance, the arena’s audio system would do the usual task of amplifying announcements and playing music during basketball and volleyball games, but it would also have to support event productions such as graduations, and presentations such as drama and music. That meant configuring the arena PA system to handle two distinct scenarios.

“We needed to have the sound cover all of the seating evenly and consistently but have pattern control that didn’t let it spill onto the court when it wasn’t wanted. The referees don’t like the PA competing with them,” said Edwards. “But the players and the cheerleaders do like it loud on the court. It pumps them up.”

Brian Bridges, Communications Director for the Lake Hamilton School District, explained that the school understood the nuances of sound coverage. “Our initial requirement and expectation was that we wanted a system to sound good, but we also [wanted] extra sound to the floor for basketball warmup time that would not blast the spectators, and wanted it to have clear announcements and music during events,” he said.

Edwards’ technicians used Community’s dSpec digital switching system to set up a game configuration that turns on most of the nine Community R.5 speakers in the system installed in the center cluster over the court, where two Community ILF218B subwoofers are also installed, and another that mutes those and turns on four R.5 speakers suspended from the ceiling at one end of the arena that are aimed at the court. Adjustment for delay and equalization is programmed into the speaker controller.

Edwards said that the ceiling’s 70-foot height made it tricky to position the suspended speakers in such a way as to avoid interfering with the lighting, some of which is positioned along a catwalk that bisects the center cluster. “It took some coordination to get the speakers hung at the right angles and elevations but still minimize interference with the lighting, which has to be above the throwing arc [of a basketball in play],” he explained.

The arena’s local video comes from three Panasonic AG-AC130A video cameras that feed a NewTek Sports Production bundle that includes a Tricaster 460 Advanced Edition and a 3Play 440 replay and slow motion device. The same cameras are also used in the stadium over fiber to the Tricaster 460 via Blackmagic Design ATEM camera-conversion to SDI. The lights, video and the sound in the arena are controlled from a central location, a small control room in the arena building that has no direct sightlines to the gym; instead, the arena operators rely on the camera views to see what’s going on in the gym and sometimes use iPad- and laptop-loaded remotes to control audio and moving-head lighting fixtures from the control room.

The glass-walled VIP suite is well positioned to be a control room, but Edwards said its use as a VIP room outweighed the other application. For audio control at sports events, a movable eight-space SKB rack is placed at the scorer’s table for the announcer or assistant to control audio levels during the game. This rack houses a Shure ULX wireless microphone system linked to a Shure eight-channel SCM-800 mixer and a Denon DN500 CD/MP3 player. For control of production-type events, there’s a portable mixer cart with a 16-channel Soundcraft Si Expression 1 mixer, more Shure ULS wirelesses and a Denon DN500 patched in at the top row camera area.

Although the arena’s gym is its central feature, the building holds a slew of other spaces used as workout, cheerleader rehearsal, hospitality and conference rooms, plus an alumni hall, and each has its share of AV. The team film room provides replays of games to be vetted by coaches and players through two Christie 6600 lumen projectors with independent, side-by-side switching, and Da-Lite screens.

Conference rooms and most other spaces have one of the LG 60-inch LCD displays and audio distributed through Community D8 ceiling speakers, with video sources selectable through an Extron 1608 eight-input HDCP-compliant switcher. Sources include wireless inputs through an Apple TV receiver, a local computer input, a mini jack audio input and a CATV input with a house playback channel. If a room has to crank the volume up for music, like the Cheer Room or the weight rooms, audio is played through a pair of Community VERIS2-1596 two-way speakers. Crown CD series amplifiers power all of these rooms’ audio systems. Edwards reported that the plan called for including extra AV jacks in all of the rooms for future expansions.

Most of the cabling between devices in the arena is copper. Although Edwards acknowledged that’s something of an anomaly these days, he noted that network solutions like Dante were not provided for in the budget. However, copper shares the cabling stage with Cat6, HDMI and fiber.

The distance from speaker to seats was relatively short, able to be covered with a few long-throw speakers; the distance for the video signal back to the arena’s control room was considerably further, necessitating fiber infrastructure for video, broadcast audio, playback audio and data for the control room.

In addition to the camera feeds sent on fiber to the arena control room, there are also audio sends and returns via fiber for both the video control room and the VIP balcony. The stadium’s VIP balcony, located under the main stadium video board recessed into the side of the arena, has Community D10 ceiling speakers and another Crown CDI amp installed. Control for the stadium’s audio is located in the press box using a Shure ULX wireless microphone system linked to a Shure eight-channel SCM-800 mixer and a Denon DN500 player, all in a movable SKB eight-space rack.

Edwards said that the audio, video and lighting that went into the new arena and the existing stadium were designed and programmed for ease of operation, but at the same time to deliver on a promise that the AVL for the school’s sports facilities would be as competitive as the school’s teams. And what they see and hear on television substantially informs their expectations.

“They hear the bass loud on NBA games on TV and they want their own systems to shake the rafters,” he said, adding that the accessibility of the AVL technology is also intended to allow all students, including non-athletes, to participate on the production side. “We’re seeing this more and more at the high school and regional college level. But especially in high schools, it has to be simple and easy to operate. Getting that balance is the aim. Having a sufficient budget, like we did here, helps.” 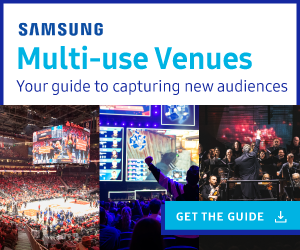 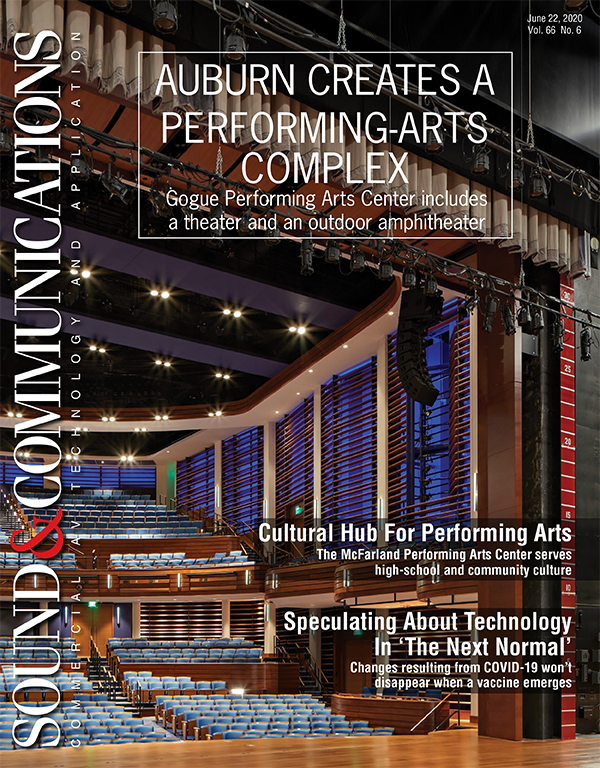