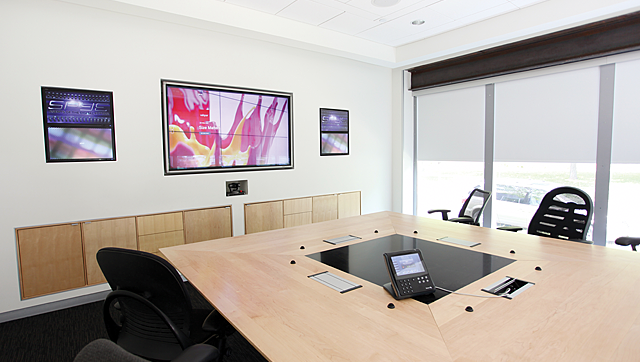 Integrators and designers from Spye (spye.co), a Minneapolis MN-based technology company, looked over the vastness that is BMW of Minnetonka, regarded as the world’s largest indoor automobile showroom, with 223,000 square feet and four floors of indoor retail space that includes a business center, a home theater and an indoor play areas for kids, for a way to move a message. When it opened in this Minneapolis suburb in 2010, the effects of the Great Recession were still palpable. US auto sales had been driven to a low of 10.4 million vehicles sold only the year before.

Since then, Hasselquist’s bet has paid off nicely as the automotive sector has rebounded, with sales in the first quarter of this year hitting levels not seen for a decade. It’s a tide that’s lifted all boats, including the ocean liner that is BMW of Minnetonka. So Spye’s technicians were looking at finding ways to help the auto dealer maintain its momentum and also keep customers onsite as engaged as possible in such an immense expanse of sales space. They were also looking at how the changes in their own business model would help them do so.

Spye Novel
The company was started in 2002 as Spyeglass, a master distributor of 3M, Plexiglas and MACtac projection screens and films, interactive touchscreens, and other hardware, as well as its own self-developed Spyeworks digital signage software. It sold to regional and national AV systems integrators, some of which also worked with the company for installations of their proprietary systems. However, clients using these products had content that came from a variety of sources, and integrators had a wide range of levels of competency when it came to touchscreen technologies, especially over a decade ago when that technology was not nearly as common as it is now.

Software, hardware and integration didn’t always line up perfectly. Company Founder/CEO Paul Krumrich, who launched Spyeglass by maxing out his credit cards to buy $20,000 worth of Vikuiti projection film from 3M, said that, around 2006, they set out to remedy the situation, first by adding dedicated AV systems integration capability of their own, a spin-off dubbed Sensory Environment Design (SED), then by incorporating in-house content development skillsets. Together, these new competencies remade the company, which today is an AV systems integrator, under the umbrella rubric of Spye Group, that also provides development and consulting services focused on content, as well as a range of interactivity products, from its Spyeglass division.

“It was distribution [that] brought us into integration,” said Krumrich. “We started Spyeworks, as the digital signage division is called, to bring to market our own software and hardware platform that, along with our integration work, led us into content development as a service to our integration clients who needed content to run on the displays that were running Spyeworks. So we evolved from product development and distribution to integration, to software/hardware to content creation. Basically, from different parts of the solution [came] a total solution.”

Separate Divisions
The company operated the product, content and integration divisions separately until two years ago, when they were rolled into a single entity under Spye, LLC. The content and display-products aspects also form Spye’s digital signage proposition.

Looking back on how difficult it sometimes was to assure that content would be portrayed correctly and effectively, Shane Seira, who manages operations and engineering for Spye, noted, “As with any integration situation, there are a ton of one- and two-man shops that might be good for some things but don’t have the training to deploy signage and get the content integrated into it correctly. That’s why companies like AMX and Crestron demand that integrators who deploy their systems take mandatory training. They don’t want just anyone doing it. That was the same for us when it came to Spyeglass because it’s such a custom product. The real problem is that, when the client isn’t happy with the outcome of a project, they’ll tend to associate the problems with the product, not the installation of it. That’s not good.”

Primary Revenue Generator
Interestingly, integration is now the primary revenue generator for Spye. Its portfolio extends to include retail, hospitality, healthcare, education and corporate, such as the sophisticated control room they recently completed in Mooresville NC. Not every project necessarily uses the company’s content capabilities or product lines; in that sense, they compete with other AV systems integrators on bid projects.

But Gretta Fry, Spye’s resident content designer, feels that having those other attributes gives them a leg up in various ways, such as the ability to integrate live social media feeds or video into client-supplied graphics and other content, and make them not only work together, but feel like they belong together instead of looking like randomly combined elements. “We understand the technology but also understand branding and what that requires,” she said. In fact, Spye was its own client: The company underwent a rebranding a year ago that reinforced to clients that it is a single entity with a number of aspects, most of which can be demonstrated in Spye’s offices, in a recently renovated industrial building in Minneapolis’ Seward neighborhood. Those offices double as showrooms and display the integration of much of the technology they recommend to their clients. “Our best sales tool now is our building, and the fact that we did 95% of the [renovation work] ourselves,” said Krumrich.

The BMW of Minnetonka showroom is an example of where all of that comes together. Even though the installation itself is modest (five 47-inch LG flatpanel displays, two of which are soffited in columns in a lounge area and others in customer-interaction areas like a coffee bar, with 124 Sonance CM660 ceiling speakers comprising a distributed audio system powered by a pair of Crown CTS 4200A amplifiers and managed by a dbx ZonePRO 1260 processor and connected by a few miles’ worth of Liberty cabling) the system also adds three Spyeworks players and supporting software, as well as Spyeworks network manager software, which routes the content between screens and integrates outside feeds such as DirecTV and weather inputs. These are loaded into a Middle Atlantic rack located in an equipment closet on one of the floors.

Fry said that the Spyeworks system acts as the routing matrix as well as the media player, sending preselected content streams to different zones in the expansive showroom. “We did the Spye-branded package for the system, which can show DirecTV or news or weather, but also show specials in the dealership’s shop, or let a customer know that a car in for repair is ready to be picked up,” Fry said.

Audio is purely background music; paging is a completely separate system installed by a phone and data company related to the dealership’s ownership. According to Seira, the main goal for that is to maintain a fixed decibel level and stay in the background.

Diversification
But the digital signage that rides on the installed video system reflects the benefits of diversification for Spye. Fry pointed out that the content (a combination of input created by the dealership, massaged and enhanced by graphics and animation created by Spye, and corporate messaging provided by BMW) is updated regularly, which keeps Spye involved and is a source of recurring revenue. She said that she’ll create new content packages for the client and present them for approval; most recently, these include integration of social media streams that allow the store’s and customers’ Twitter tweets to scroll across the screens’ ticker crawls.

It’s a simple system, but a far cry from the single screen running static content and broadcast TV that the dealership had in place before…and one that packs considerable customer-engagement punch for the dealership (broadcast TV plays for customers in one zone while running logo animations, promotions and product data in other zones) while remaining cost effective, even with ongoing content updates and remote-maintenance monitoring.

One-Stop Shop Benefits
Krumrich said that this kind of digital signage in the retail environment, much of which isn’t immediately obvious, covers a lot of ground for clients. “It can remove pressure from the sales process by allowing customers to interact initially with a display rather than a salesperson, as well as individualizing the shopping experience and tracking interaction,” he said. Integrating social media into the content also helps develop brand continuity between a company’s physical and online presence, he added. “Branded interactive experiences that are linked to social media are very popular and offer a way to not only engage individual users but their entire social network,” he explained.

And, although more of Spye’s overall revenue comes from its AV integration work, it’s the company’s content component that both differentiates it and acts as an additional point of engagement with its clients, joining them on both a technological level and on a creative plane. The synergy between those two aspects is more than the sum of its parts when done well, just as it once could have produced a negative outcome when medium and message failed to properly mesh, because content development and systems integration weren’t working on the same page.

“You can have a great [display] platform, but if the content doesn’t match it, or the other way around, it won’t accomplish what it’s supposed to,” said Fry.