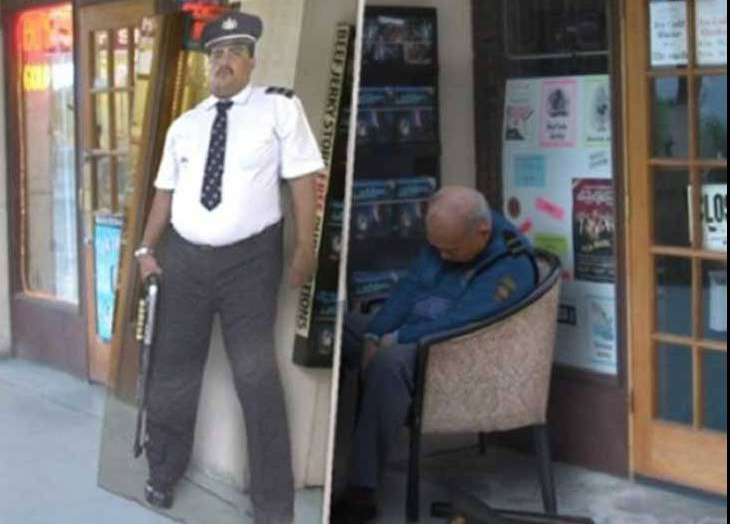 I was at my favorite liquor store the other day. It was Liquor Store Thursday, after all. I went up to the cashier to pay for my selections and noticed something funny. Behind the cashiers is a ledge about four-feet above the floor and about two-feet wide. Then there were windows from the ledge to the ceiling. Standing on the ledge was a security guard. I thought it was a great place for a security guard to stand. He was up high, so he could see the whole store from a bird’s-eye view. However, wouldn’t it be a little dangerous for the guard to stand on a two-foot ledge for eight hours? He couldn’t lean on the windows. And what if he lost his balance?! I started to look a bit closer at the security guard, and this guy was good. He wasn’t budging at all. I used to be impressed by the Queen’s Guard at Buckingham Palace, but those guys in the funny hats had nothing on this liquor store ledge-guard. He just didn’t move at all. It was like he was made of stone…or plastic, as the case may be.

Yup, he was a fake guard.

Naturally, that got me thinking of commissioning AV systems.

Have you ever attempted to use a conference room with a DSP mixer and a multi-channel, Dante microphone where everything was left on the default settings? Depending on how the devices are connected and what manufacturers are selected, it might actually work out of the box.

I’ve seen this a bunch of times. The last time it happened was when an IT company was strong-armed into doing the AV for a conference room in addition to the network. They bought the AV equipment online, connected it as best they could, and then just turned the equipment on. If the far end hears something, it’s considered a win. I’ve seen some examples where the installer didn’t even know there was configuration software for the DSP mixer or microphone. It’s a perfect storm of luck, ignorance and incredible technology that allows these unqualified “AV companies” to get paid for conference-room integration.

As people start to actually use the room, however, they start to realize that something is not quite right. They blame the equipment first, even though it’s a testament to the technology that the system is working at all. Then they call someone else in to troubleshoot the installation. Of course, once configured properly (with actual software and test equipment, even!) the system performs beautifully.

This is a drastic example, of course. However, it does point out the fact that it pays to look under the hood sometimes, even when the system appears to be working well. With the influx of multi-lobed, configurable microphone arrays into the market, they might appear to be working well even when they are not properly configured. These ceiling microphones can sound incredible. If they sound like regular ceiling microphones with lots of early reflections (that “hollow” or “inside-a-cave-y” sound you typically get from a ceiling microphone), they might not be configured correctly. It is worth the time to listen to each lobe to make sure it has the appropriate size, shape and direction for the scenario. If it is a Dante device, you can do this easily with Audinate’s software and your laptop. If not, you might have to listen to each lobe at the far end of the call. It is important to test each lobe to get the best performance out of the system.

The same is true for the DSP configuration. It is worth it to make sure it is not only configured properly, but also that the site file is organized, accurately labeled and laid out in an easy-to-navigate manner in the GUI. The system might be working beautifully, but if the site file is a mess, maintaining and troubleshooting that system is going to be a nightmare. The layout of process blocks in the open-architecture DSP interface should be inspected just as rigorously as cable dressing in an equipment rack, and for the same reasons.

It’s the same thing with the rubber security guard at the liquor store. It may look like there’s a guard on duty, but he’s not a fully operational guard. The difference is, the liquor store paid for a fake guard as a minor theft deterrent. Users never pay for a half-configured system.