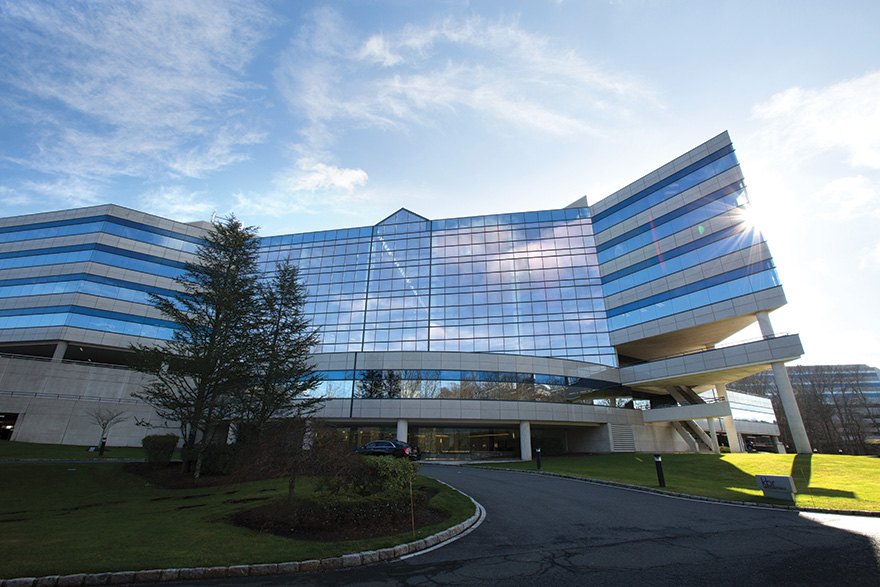 Connectivity and collaboration are, without a doubt, the two most important touchstones for corporate presentations. Whether identified as boardrooms, meeting rooms or huddle spaces, in these environments, productivity hinges on how quickly, easily and reliably a presenter can be off and running.

AV technology continues to evolve to meet the changing connectivity needs and collaboration options on corporate campuses. The rise of platforms such as the Microsoft Surface Hub enhance collaboration through centralized management of meeting schedules and initiation (via Skype for Business), whiteboard integration, and customizable apps networked between the main screen and user devices.

Those were exactly the kinds of capabilities that USI Insurance Services (USI), a leading insurance brokerage and consulting firm with more than 140 locations nationwide, sought when the company explored upgrades for its varied meeting rooms. The insurance giant recently hired 1 Touch AVS, a technology integration company that designs, installs and supports technology systems across audio/video, energy management, security and CCTV.

With all branches scheduled for upgrades, 1 Touch AVS commenced its work at the most sensible starting point—that being, USI’s large corporate headquarters in Valhalla NY.

“The trend we see with all of our corporate customers these days is BYOD,” Thomas Duffany, 1 Touch AVS’ President, said. “When these businesses welcome outside presenters into their buildings, they typically bring their own devices as a presentation tool. They need a simple way to connect to a TV or display in the room. The fact is that the BYOD trend has accelerated more quickly than corporate campuses have adopted presenter devices into AV systems. Many are now launching initiatives to catch up.”

Microsoft Surface Hub is one such tool that is bringing corporate AV environments up to speed. It incorporates a Windows 10 PC within a high-resolution touch display, laying the foundation for a simple and intuitive means of in-room collaboration.

USI recently made the decision to install Microsoft Surface Hubs in the main boardrooms at all its locations (the initial 125 sites were completed in December 2016, and the remaining sites were installed in the first quarter of 2017). To take full advantage of the presentation capabilities afforded by the Microsoft Surface Hub, including the ability to display a user’s laptop and deliver USB mouse and keyboard control from the touchscreen, Duffany explored various AV switching and distribution solutions to enhance connectivity for meeting participants.

“With Microsoft Surface Hub, most presenters will connect to the system via DisplayPort and USB to use the touchback feature,” Duffany said. “To take full advantage of that flexibility, we needed AV solutions that could switch multiple sources into the Surface Hub and accommodate a variety of connections. On top of that, USI wanted each room to look as clean as possible, with a minimal number of components in eyesight.”

Although larger than most of the company’s other offices, USI’s Valhalla location served as an ideal blueprint for the enterprise-wide upgrades. According to Duffany, “The project in Valhalla, which is similar to the other offices, is really based on four distinct elements. The crown jewels for each location are the boardrooms with Microsoft Surface Hub. Additionally, we were tasked with the design and integration of conferencing systems in large conference rooms, divisible training rooms and small huddle spaces.” He continued, “Each of those spaces demands a tailored solution, and there are few suppliers out there that have products ideal for each environment. What we didn’t want to do is cherry pick from different vendors to build the right solution for each space.”

The 1 Touch AVS team was responsible for all video, audio and networking solutions. Somewhat humorously, the integration team identified and installed some decidedly “non-AV” solutions in the main boardrooms in order to keep audiences focused on the presenter.

“Those rooms have spectacular views, and they also can get very hot with sun exposure,” Duffany stated. “Because Microsoft Surface Hub features two ambient-light sensors, we opted to integrate Lutron Serena motorized shades into the project for comfort, as well as to keep people focused on the presenters.” He continued, “They can be controlled to zero-, 25-, 50-, 75- and 100-percent open to align with the environmental factors at that moment. And, we added Lutron lighting that can be set for the same five levels. There is also an energy-saving benefit from reducing the need for electric light; however, it really all circles back to creating a better user experience.”

Duffany opted for Atlona to accommodate the majority of video switching and distribution needs. For the main conference rooms, Duffany went with the AT-UHD-HDVS-300-KIT to integrate with the Surface Hubs, providing AV switching, as well as USB and HDMI extension. The kit provides a transmitter and receiver with video inputs to support HDMI, DisplayPort and analog video signals. Additionally, built-in USB hubs support keyboard and mouse connectivity, as well as connectivity with the Surface Hub and a presenter’s laptop.

“This approach makes it easy for the presenter to connect and immediately get to work,” he said. “The HDVS-300 provides two ports on the conferencing table, and the presenter can plug into the Surface Hub using HDMI or Display Port, plus USB connectivity. The presenter can interact with the touchscreen and control everything on his or her laptop or mobile device. The architecture is really designed with trends in corporate AV in mind.”

USI challenged the 1 Touch team to eliminate as much cabling, wiring and visible componentry as possible, as ensuring a clean look and feel in each space was essential. For similar reasons, Duffany chose a Symetrix Radius AEC DSP to support all teleconferencing needs. “The Symetrix unit, integrated in an AV closet in the IT room, supports all voice-over-IP needs in alignment with USI’s Cisco teleconferencing system, and it provides the flexibility to dial separately into two different boardrooms,” Duffany said. “The GUI is basically the dialing system, and it connects the VoIP line to microphones and amplifiers, and straight down the line to the AtlasIED in-ceiling speakers. What was especially attractive is that the design eliminated the need for a tabletop dialing system. It’s very clean and intuitive.”

The Atlona components are mounted under the conference tables. Tabletops are clear in most rooms, other than iPad tabletop conductive charging stations. The main conference rooms also feature iPort conductive wall stations; the presenter can use iPads in any of those rooms to mute or decrease microphone and loudspeaker volume at any time.

“The beautiful thing about the HDVS-300 is that you can plug in your webcam, your keyboard and more right there at the head end, and it leads out with the Cat6 shielded cable directly to the Surface Hub,” Duffany said. “There is less cabling to deal with, so the team at USI doesn’t have to worry about fiddling with connections behind the screen. And, because we can use a single product, we don’t have to integrate a bunch of other components to make the touchback work on the Surface Hub.”

He continued, “It’s a very clean look overall inside the room, and I have a single point of failure if something’s not working.” He stressed the benefits from an integration point of view. “You can imagine the headaches if we had Products A, B, C and D in the mix to make the touchback work for multiple users. This approach eliminates those headaches, and the LAN connectivity allows me to do any troubleshooting remotely.”

1 Touch AVS opted to install a network to support all LAN connectivity throughout the building, choosing an Araknis Networks router with OvrC capability, simplifying remote support.

“Araknis allows us to access our routers, switches and wireless access points remotely,” Duffany said. “I can even accomplish it from my phone.” He continued, “The embedded OvrC capability also provides automated handoffs across the network, upon recognizing a stronger signal presence from a neighboring wireless point. That’s useful if someone is walking around with an iPad.” Duffany added, “It’s a seamless handoff to the next access point, without having to fool with the Wi-Fi settings, as he or she moves from room to room and floor to floor.”

The Araknis network is powerful enough to support the conferencing systems in the other conference and training rooms. Although those rooms are not equipped with Microsoft Surface Hub, they offer plenty of high-end AV equipment to support presentations. All divisible training rooms feature an Atlona AT-UHD-CLSO-824, which provides eight sources to four screens. It is integrated alongside a Symetrix Radius AEC DSP for VoIP support, along with CTG Audio microphones and AtlasIED in-ceiling speakers.

“The CLSO-824 is very useful, because it mirrors content to two screens,” Duffany said. “In a divisible training room, USI can display the same content in both rooms; or, it can hold two different training classes, each one projecting different content. And, we can integrate this cleanly with the Symetrix Radius AEC DSP to bring it all together.”

The conference rooms, both large and small, are even more minimalist. The larger rooms use the Atlona AT-UHD-CLSO-612ED to support six sources to a single output, with mirrored content shown on a Screen Innovations 5 Series Slate 1.2 projection screen and a Sharp AQUOS LCD display. The smaller huddle spaces leverage the Atlona AT-HDVS-150-TX transmitter (two HDMI and one VGA input) and AT-HDVS-150-RX receiver.

“The HDVS-150 is a useful little system in that it supports auto-switching between digital and analog signals, and link status LEDs confirm the two units are communicating,” Duffany said. “We immediately know if there’s an issue with the transmitter, the receiver or the cabling in between. For audio needs, it also integrates with the Atlona AT-PA100-G2 amplifier that we can control via IR. That allows us to pull audio from the presentation and then project it over the Bogen in-ceiling speakers in these rooms.”

For Duffany, the most valuable feedback he has received to date centers on the ease of use. That is especially important in light of the ever-present BYOD element at USI.

“We recently rolled out a replica of this system at USI’s Houston TX office,” Duffany said. “An executive there approached me and noted that many of the presenters and other staff members were not tech-savvy. Yet, they were able to plug right in, and the system automatically worked.” He concluded, “That is the best compliment you can have in corporate AV, from both a technology and an integration perspective.”