Ring out the old,
ring in the…old?

Last June at InfoComm, my industry colleague Malissa Dillman of Kramer Electronics taught a class titled, “What Does Futureproofing Mean for Digital Designs?” Now, there’s an interesting topic that likely led to a spirited discussion and likely some debates among attendees.

Now that we’re firmly ensconced in the age of digital AV, barreling toward the second half of the second decade of the 21st century (cue dramatic music), it’s worth a moment to sit back and think about this question: How would you futureproof a new digital AV installation, particularly as it applies to cabling and signal transport?

Visions of multimode optical fiber and Category 6 structured wiring probably just flashed in front of your eyes. Okay, they’re both good choices; I can’t argue with that. So how about coaxial cable?

Yeah, I expected that. So listen up: Believe it or not, coaxial cable is still an essential part of the toolkit. To use it in a digital AV installation, you just need to learn a few new tricks, or relearn the ones you forgot.

Coax cable was first patented in England in 1880 and then in Germany by Siemens in 1884, the same year the basic principles of liquid crystal birefringence were discovered. In the United States, AT&T got its patent on coax awarded in 1929, and 12 years later was running telephone calls and broadcast-quality (AM) audio in the upper Midwest over coaxial links.

Today, coax is still widely used for RF applications, from “mini” sizes in two-way radios to rigid hardline and waveguides for high-power microwave transmitters. As a result, we have a tendency to think of coaxial cable being used primarily for single-channel applications.

Yet, the RG-6 coaxial cable drop coming into my house from Comcast hasn’t been changed in the 17 years I’ve lived here, even though Comcast runs a 100%-digital plant with hundreds of 256QAM channels and internet telephony and high-speed broadband (25Mb/s, in my case) over that very same piece of cable…that, for all I know, is the same piece of coax that was buried in the ground back in 1987 when my house was built.

The beauty of coax is that it comes in all sizes (flexible, semi-flexible or rigid) but with two primary characteristic impedances: 50 ohms and 72/75 ohms. Both of these numbers are fractions derived from the characteristic impedances of an open-wire transmission line, which is rarely used anymore. The most common types were ladder line (200 ohms) and TV twin-lead (300 ohms).

Granted, coaxial cable doesn’t have anywhere near the transmission distance of optical fiber…even multimode fiber. But it does measure up well to category cable in that department, and exceeds category cable in terms of power capacity. It’s available in both standard and non-contaminating versions, the latter for burial underground.

And here’s what you probably forgot about coax: It can multiplex signals. From a basic microphone connection with phantom DC power and AC signals traveling along at the same time to the aforementioned Comcast drop at my house delivering “more channels than I’ll ever watch,” coax is indeed a good candidate for signal multiplexing.

How about Power over Ethernet? Feh! Coax has been doing that for years with phantom power. The only caveats are that it must be DC power (same as PoE) and the maximum voltage and wattage is limited by Class 2 electrical codes.

Okay, so you’re skeptical. “What’s the maximum bandwidth I can get out of coax?” you ask. Well, Comcast is pushing signals to 1GHz (1000MHz, for those who are counting) through their system, which is predicated on RG6-U coax pulls throughout a home. 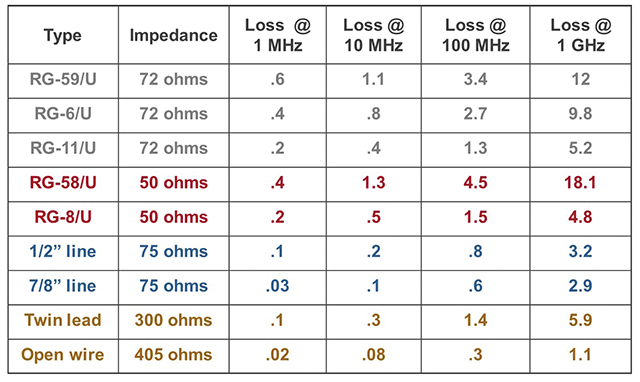 The Multimedia over Coax Alliance (MoCA) sets its sights even higher. On its website, www.mocalliance.org, the specification for MoCA 2.2 is now published. Highlights include:

Again; all this just using the existing coax running through your home.

For coaxial cable, we’ll want to use frequency division multiplexing (FDM). Hundreds of signals can travel through a single piece of coax, differentiated only by their frequencies and selectively tuned at the receiver. After all, this is essentially how radio and TV broadcasts work.

FDM gives us some interesting options for distributing multiple channels. All TVs have built-in digital receivers that can demodulate 8VSB (terrestrial) and QAM (unencrypted cable) channels, supporting 480i, 480p, 720p and 1080i video. Presently, these TVs tune from channel 2 through 51 (69 on older sets), so any programs you distribute over coax in those formats are received with no additional equipment.

You can also use separate receivers and encode channels in QAM, DVB and VSB formats. (The video codec used in each case is the older MPEG-2 standard.) So, all you’d really need to distribute a multi-channel package to numerous displays is some sort of distribution amplifier with multiple outputs, or a single line with taps, or a broadband amplifier and lots of splitters.

Remember that the rule of thumb (best practices) for 8VSB/256QAM systems is to shoot for a 30dB-32dB carrier-to-noise (C/N) ratio. Practically speaking, 8VSB receivers need only about 15dB C/N to work correctly if there is no multipath or tilt present, while 256QAM signals are slightly touchier (probably 20dB C/N).

You can use coax as a simple, intermediate connection to distribute multiple channels of video and audio by simply installing an MPEG decoder at the far end and continuing on through a standard TCP/IP network, encapsulating MPEG programs with IP headers. (You won’t get the distance out of coax that you would with optical fiber, however.)

If you know your way around filters (low-pass, bandpass, high-pass), you can have some real fun mixing and matching signals through coax. There just has to be some sort of multiplexing involved (frequency or time) so any receivers can differentiate between each channel at the playback end. High/low-pass filters can take large groups of channels and pass/block them above or below a specific frequency as yet another way to multiplex.

As RF signals travel along a cable, an increasing amount of the energy is either absorbed into the dielectric or dissipated because of DC resistance. Both contribute to attenuation, and cable manufacturers will give you specifications that show how much signal you’ll lose at different frequencies over long lengths of cable.

Normally, the specification calls for 100-foot lengths of cable and loss figures are given at 1MHz, 10MHz, 100MHz and 1GHz. Table 1 illustrates figures I assembled for various types of Belden cables. (Note the amazingly low signal loss numbers for open-wire line!)

If you are designing and installing a multi-channel video distribution system, my rule of thumb is to build in an additional 3dB of signal level above what you’d normally consider acceptable. Table 1 tells us that, if we run a 100-foot piece of RG-11/U, we’d drop slightly less than 6dB at 1GHz.

So our amplification system should give that back to us, plus another 3dB. In this case, a 10dB amplifier would be appropriate. Current models of digital TV receivers can easily handle signal levels in the 50dBm range without having a nervous breakdown, but it’s easy enough and inexpensive to install small inline attenuators at receivers close to the signal origin point (transmitter) if they’re having trouble.

Assuming standard 6MHz channel tuning and a VSB receiver, you could easily put 67 channels into a standard TV system. With QAM modulators and tuners, that number climbs to more than 130. And you can connect any video source you want into a VSB or QAM modulator: SDI, HD SDI, DVI, HDMI or analog video. The only catch is that you can’t transport copy-protected (HDCP) content because the copy protection would have to be removed before the content could be modulated as an RF signal.

For additional channel capacity, there are RF modulators that will package two HD MPEG programs into a single 256-QAM channel, resulting in a total of 270 channels in your system. (The largest private IPTV/QAM systems I’ve seen carry about 200 custom-programmed HD channels).

It should also be noted that multi-channel RF program distribution qualifies as a constant bitrate (CBR) network, unlike AV-over-IP, where the bandwidth is often shared with other users (like TCP/IP traffic). All programs are delivered with the same picture quality as they were encoded, no matter how many receivers are tuned in. (This, by the way, is the original concept of multicasting!)

Another advantage of coax that we haven’t mentioned until now is that it is ridiculously easy to terminate, certainly faster than category wire and optical fiber. And the tools required to troubleshoot cable systems (spectrum analyzers and signal level meters) are also as affordable as they’ll ever be. No one who works in RF should be without an analyzer because it is used to measure C/N levels, look for tilt and identify working/non-working channels.

And there you have it. Coaxial cable is still alive and kicking, and a long ways from retirement. It can coexist with optical fiber and structured wire, has plenty of bandwidth and channel capacity, is easy to terminate, comes in different sizes, can be run outside and even buried, and multiplexes AC and DC signals with ease. It is also available with extra shielding or even as rigid line to minimize stray radiation and interference.

Everything old is new again….