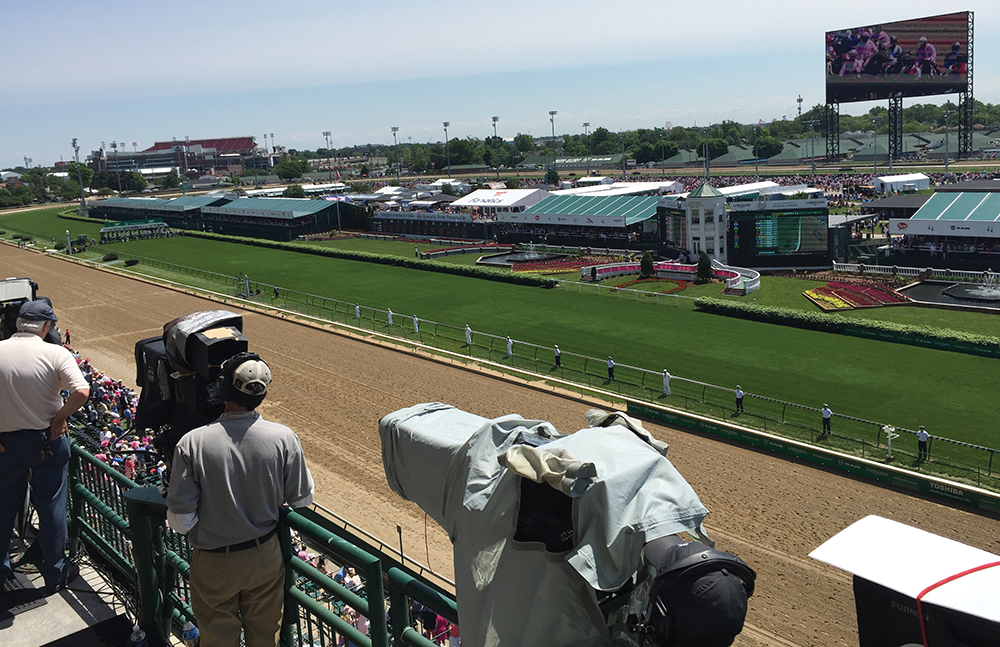 The camera deck on Derby day.

“What shows on the racetrack big display board is just absolutely jaw dropping for people to see,” declared Jill Byrne, Director of Programming and Broadcasting at Churchill Downs in Louisville KY, who is also the venue’s onscreen host and commentator (see “Construction“). “On the AV technical side, slow-mo shots are very detailed,” she told us. “The horse is a very elegant animal, so when you get a variety of different camera angles and catch the steam coming off their backs with their hair blowing in the wind, it’s very impressive. Also, in racing, there are the eye-catching colors of the silks that the jockeys wear.”

The production area is split into two rooms. The stunning imagery of horseracing shown on the existing 15,224-square-foot Panasonic 4K LED located on the back stretch inside the track is the result of newly installed AV technology dedicated for producing in-venue imagery. There’s also a dedicated room for producing a separate show that’s broadcast globally, as well as fed simultaneously to screens inside the venue for wagering. “The entire industry and the sport lend themselves very well to high-quality production,” stated Byrne, “which is what we do.”

Interviewees for our story include Churchill Downs’ Byrne and AV integrator spokesperson Jeff Volk, Vice President of Alpha Video Sports & Entertainment Group, a division of Alpha Video and Audio of Eden Prairie MN (www.alphavideo.com). Before we look at the venue’s new AV, here’s a look at the history of Louisville’s premier racetrack.

We have to go back to May 17, 1875, when a crowd of 10,000 people gathered for the first Kentucky Derby race. Today’s venue seating capacity is 50,000. The event occurring on the first Saturday in May has been dubbed “the most exciting two minutes in sports” as thoroughbred horses compete along a 1¼-mile racetrack.

According to Alpha Video, sports and entertainment venues across the country have embarked upon HD production facility upgrades to better entertain and engage fans in their venues. Today’s fan is a new breed. It’s no longer simply good enough to put video on an LED display or a computer monitor because fans have come to expect an experience that rivals what they can receive from the broadcast networks in their homes.

In addition to fan entertainment, Churchill Downs had the added need to produce a separate simulcast feed, which had a potential impact on millions of dollars in pari-mutuel wagering for the venue.

Despite a handful of HD upgrades in 2013 and the installation of the 4K LED big board in 2014, technical capabilities at Churchill Downs didn’t adequately service any of the venues’ three primary production needs: in-house entertainment for the track big board, feeds for in-house TV betting, and simulcasting that venue feed for broadcast distribution worldwide to other racetracks and betting parlors for wagering purposes.

There are four additional large-screen displays in the track locale, including two Daktronics infield boards. The paddock area behind the grandstand where the horses are saddled and prepared before they head out to the racetrack has a Dak-tronics, as well. And a Panasonic LED is located in the plaza area, which is adjacent to the paddock area.

Camera systems, which were recently upgraded to HD, were retained, as well as some miscellaneous production equipment. Almost all of the equipment purchased when the 4K big board was added was reused, including the Sony PMW-F55 4K camera, Sony HSC-300 HD cameras, Vizrt graphics engine and Ross Video BlackStorm video server.

All HD systems operate natively in the 1080i format. However, infrastructure throughout the system was designed to support a 1080p production format in the future. The system was also designed to allow for the Sony 4K camera that Churchill Downs already owned to be displayed on the big board in 4K resolution, as well as shared with outside television partners during the Kentucky Derby or other major broadcasts.

According to Volk, this was a design/build project for the integrator. “We had an existing relationship with Van Wagner Big Screen Networks staff,” he explained.

The production area is separated by a glass door so the staff can work and not be distracted by what another team is doing. For a non-Kentucky Derby race event, there’s a control room with about a dozen staffers at the helm, not including camera operators. On Derby Day, personnel expand to about 30. “One of the unique challenges of the room is that it had to be built to support event requirements for the other 51 weeks of the year, but then has to expand to support the Derby for that one week of the year,” said Volk. “The 3½-month schedule was pretty compressed. There were construction delays that further compressed the schedule. So, the main challenges were working within the schedule and understanding that the Kentucky Derby race dates weren’t going to change.”

“The audio in facilities of this type is pretty straightforward,” explained Volk. “It sources from the house PA for the big board show, then that mixes in the track announcer, some other audio we take from the main audio feed and the simulcast show that goes around the world. So, it’s a submix in the production facility, coming via tie lines to the main sound system.” Focusrite RedNet bridges provide interfaces from the house audio system to the audio production systems.

Speaking of related tie lines, one part of the project that Alpha Video undertook was to totally revamp all the of the facility’s broadcast cabling infrastructure. “Thus, all of the camera boxes around the track are triax and fiber,” said Volk. “All the connectivity used by both the track for its production and the venue’s television partners who come in for Derby Week has been revamped.” Furthermore, all of the Churchill Downs camera systems come into the main Evertz facility router and are on a shared feed with the TV truck. From there, the facility router feeds the big board control room and the adjoining simulcast control room.

Each room is equipped with a Grass Valley Karrera production switcher. Within the adjoining replay room, the Evertz router feeds the Abekas Mira video replay system that provides the slow-mo replay for the big board show and the simulcast show. Simulcast control has a series of owner-furnished graphic boxes that tie to wagering and betting. Big board control has an owner-furnished Vizrt character generator for its graphic content. In order for the steward to make crucial decisions, the top-floor steward’s room has camera feeds for such dramatic events as a photo finish, a penalty or some sort of infraction during a race.

Summing up, Volk pointed out that the Evertz facility router is the core of the entire AV system. It feeds the two control rooms, the replay area, the engineering area and the truck dock feed area for national and local broadcasters, as well as transmission via satellite beamed to all tracks around the country.

“It was a great project to be associated with,” said Volk. “We were able to help Churchill Downs streamline its production operations and move it from a trailer and a small AV closet on another level, and increase production capabilities for the fans in this venue that are on the big board, and for people who are betting on races both at the track and around the world. I think it’s a giant leap forward for Churchill Downs in terms of production quality and capabilities.”