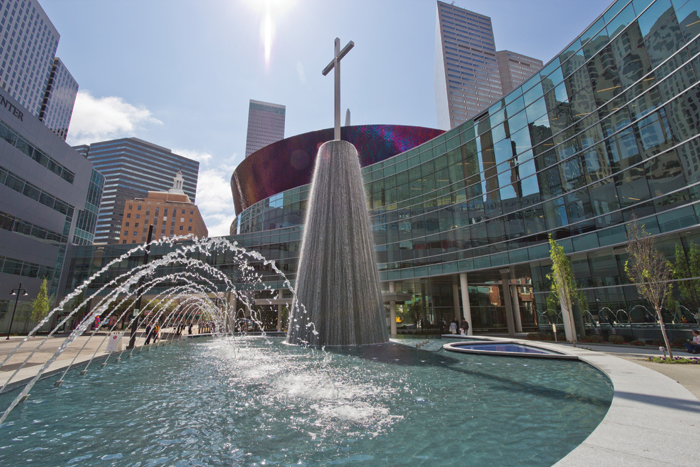 Texas is famous for doing things at a certain scale, and that’s not limited to statues of giant armadillos. Church tends to be big in the Lone Star State, too, where Joel Osteen converted the Houston Rockets’ former basketball arena into a 16,000-seat house of worship. But it’s not all about size; there’s plenty of complexity, as well, which is what you find when you look over the huge new complex that the First Baptist Church of Dallas constructed last year on its existing campus. The new, 178,000-square-foot, 3000-seat worship center cost an estimated $135 million to build, and nearly 10% of that amount (about $12 million) went for audio, video and lighting systems and products.

Didn’t Hedge on AV
In an AV sector noted for its budgetary cautiousness, the FBC of Dallas didn’t hedge itself on AV for the new sanctuary, but it also spent wisely, picking and pairing various products from a wide array of manufacturers. The result is a house of worship that lets the space be what it needs to be, from an intimate place of prayer whose massive video screen manages to bring the pastor into the audience to a hybrid sound system that lets the place rock out when that’s called for.

The project required a lot of hands. The building, designed by Beck Architects and which fittingly for a renovation had its first service on Easter Sunday 2013, was outfitted by Acoustic Dimensions (www.acousticdimensions.com), which designed the audio, video and lighting systems and acoustical treatments; Manhattan Construction (www.manhattanconstructiongroup.com), which built the facility. Clair Brothers (www.clairsystems.com) installed sound reinforcement, video projection, theatrical lighting, distributed AV and control systems throughout the new facilities, which also include an education building across the street from the new church structure. Technology includes a main PA system that features a combination of JBL and EAW loudspeakers with Lab.gruppen amplification, BSS signal processing and DiGiCo consoles. Clair also installed and programmed the Barco projectors that illuminate the massive 150-foot video screen stretching along the full length of the proscenium stage. ETC lighting and rigging systems light up the sanctuary.

Biggest Challenge
That huge ribbon-like video screen is what catches your eye first but, said Clair Systems Project Manager Mike Mason, it was the sanctuary’s sound system that presented the biggest challenge for that space. “The main thing really was creating a system that worked for what is a big but still very traditional Southern Baptist church, with a 500-voice choir for traditional gospel music, but that also could handle high SPL levels for more contemporary worship styles,” he explained. “And we had to make it look right, too. This wasn’t a black-box theater: It has a white color theme throughout, so every PA component that would be visible had to also be paintable, to match the ceiling.”

The main PA system is comprised of 18 EAW KF740P and KF394P loudspeaker enclosures hung in a pair of line arrays, each with adjacent flown EAW SB2001 subwoofer arrays. The wide proscenium stage required significant amounts of fill speakers. These are five EAW QX564 speakers for side fills, 11 UB52i speakers for the front fill, six QX954s for over-balcony fills and 11 JF8s for under-balcony fills. A secondary complete sound system for the sanctuary exterior areas, including overflow seating, incorporates 11 JBL AC2827 speakers and six ASB7118 subwoofers (weatherproofed for outdoor use), and 227 Control Series surface-mount speakers to cover the inside areas. All of these are powered by 55 Lab.gruppen C and FP Series amplifiers. “Yes, it’s loud,” Mason said with considerable understatement.

Let There Be Light
But the sound is also nuanced. The 500 voices in the church choir get some help from a huge reflector cloud installed above the choir seats at the rear of the stage. It was built by scenic set fabricator Lexington Design (www.lex-usa.com) but was designed jointly by Acoustic Dimensions and the architectural firm because it serves multiple critical purposes: First, it is, indeed, an acoustic reflector, designed with a carefully calculated combination of absorptive and diffusive aspects intended to help project the unamplified choir vocals out into the church but minimize reverberation from the surrounding ceiling and walls.

At the same time, the reflector, which is attached via clamps to an 80-foot-wide by 60-foot-deep tension-wire grid anchored into the roof’s superstructure as the truss, has to allow lighting and sound fixtures to pass through to critical points on the stage. Because all Sunday services are also broadcast and streamed, the lighting has to be especially bright. The solution was to cut octagonal holes in the reflector cloud, which is already pocked with indentations as part of its acoustical diffusion mission, to let lights shine through.

This meant that the lighting designer had to adjust his plot around where holes could be inserted into the cloud without compromising its acoustical purpose. All of this was first laid out virtually in Revit 3D modeling software, in which lighting fixture positioning and perforations for their beams were negotiated. And there was a lot of light: 182 Source Four ellipsoidal, 65 Source Four ParNEL and 49 Desire LED washes, all from ETC, make up the luminous lighting complement above the stage. That’s in addition to 32 Vari-Lite moving-head units, controlled by MA GrandMA2 and UltraLite lighting consoles.

Lots Of Head Scratching
There was a lot of head-scratching involved,” Mason said. “A lot of red pens on the design and changes and modifications to the as-built drawings,” with as much as a third of the computer predictions changed after they began physically installing the complex system. “Much of the complexity was due to the fact that broadcast lighting requires a lot of intense, even, white light, with just some color wash here and there, so there had to be a lot of lights and they had to get around the reflector. It was a complicated part of the project.”

There is absorptive paneling on the rear and side walls, using two-inch fiberglass batting covered with fabric. Mason estimates that the absorptive material covers about three quarters of the vertical interior surfaces; the remainder was left as untreated drywall, a balance he said gives the room some necessary liveness for music without disruptive reflections.

The stage is clean and sparse, with three EAW AX396 monitor wedges flown inside the choir reflector cloud and six K-array KJ50vb wedges embedded in the front of the stage for upstage monitoring adding to the Aviom A-16D Pro IEM monitoring that’s tapped from the DiGiCo SD7 FOH console. (Non-IEM mixes are done through the same console; there is no separate monitor console.) But what’s not immediately visible is a warren of choir and orchestral rehearsal rooms elsewhere in the building.

JBL VRX series speakers are used in the choir rehearsal rooms and EAW KF395 speakers are installed in the orchestral rooms. For the purposes of recording performances, they also act as extensions of the main stage, linked to the sanctuary’s DiGiCo FOH console and the Avid Icon console used for the broadcast mix in the video production control room via MADI over fiberoptic cable on an Opticore network backbone. An Avid Pro Tools HDX digital multitrack system archives all the performances.

Video
Not that the video component of the church’s AVL was all that simple. The huge rear video screen (a custom lace-and-grommet framed Da-Lite Series 300) is lit by seven Barco HDF-W22 projectors. As big as that main screen is, it’s joined by 4000 linear feet, in five layers, of LED strip lighting that runs the length of each side of the sanctuary. All video content, pulled from a Coolux server, is controlled by SMPTE time code from a master clock in the video control room that creates a massive immersive effect by also feeding control data to the GrandMA lighting console. (Similar cabling for data has been run to the audio console, but that feature is not in use yet.)

Mason described how it was used for that initial Easter service: “The audience had the perspective of being inside the cave [tomb] on Easter morning and, as the rock is rolled back and the sunlight begins to stream in, the side of the room slowly turns yellow and brighter. You are in there as the sun shines in. It’s an amazing effect. It gets the message across.”

Video also comes from the nine Grass Valley LDK-8000 cameras in place around the auditorium, six manned, two robotic and one on a jib.

Education Center
The five-story Horner Family Center education building across the street from the sanctuary adds a teaching component to the project, with classes for K through high school, as well as the more traditional Sunday school classes. But connectivity extends to here, too, with 24- and 32-strand fiber cables carrying AV from the new sanctuary (video is SDI and audio in the CobraNet Digital network format), via the production studios, into the school space to be used for overflow to participate remotely in services and other activities.

Each of the first three floors is configured similarly (as is Lavorn Hall, a 500-seat auditorium located below the sanctuary and named for a major donor to the church), with small 200-seat auditoriums on each floor of the Horner Family Center equipped with a pair of Barco RLM8 projectors, Da-Lite 12-foot screens, an Analog Way Pulse PLS200 video switcher and a Sharp LC60 60-inch LCD confidence monitor.

Sound comes though JBL Control series speakers in each auditorium, controlled with a Soundcraft Expression mixer. The larger auditorium and a gym use JBL VRX series speaker enclosures and DiGiCo SD10 audio consoles and Shure ULXD wireless microphones, with all audio powered with Lab.gruppen amplifiers. All floors use an AMX control system for lighting and AV, programmed with simple macros for on, off and basic functionality, making it easier for the volunteer staff to operate the rooms. “We used the same equipment throughout for the same reason (they only have to learn a few key pieces of equipment) and to make maintenance easier,” Mason explained.

The AVL complement at the First Baptist Church of Dallas is massive, and Mason acknowledges that it might seem like overkill in some parts of the complex. But, he added, the bar was set high for technology at the church and, as importantly, it was decided that it should be consistent throughout the complex. “The level of technology in the sanctuary and in the education building are about equal, with many of the same systems used in each,” he said.

“The goal was to keep everyone as fully engaged with what goes on in those rooms as possible. At the same time, the equipment and technology platform decisions were based on what worked best for the applications: We didn’t just choose one speaker brand, for instance, and try to use it everywhere. And what would scale well across all of the spaces, to make cost of ownership, maintenance and operation easier, like using the same audio amplifiers and audio processing in every building. There was a lot on the agenda, and this is an example of being able to achieve it.”

Dan Daley is a journalist who has covered the confluence of technology, business and culture for almost 30 years. He has also been a successful composer and recording studio owner, and authored the book, Unwritten Rules: Inside the Business of Country Music.