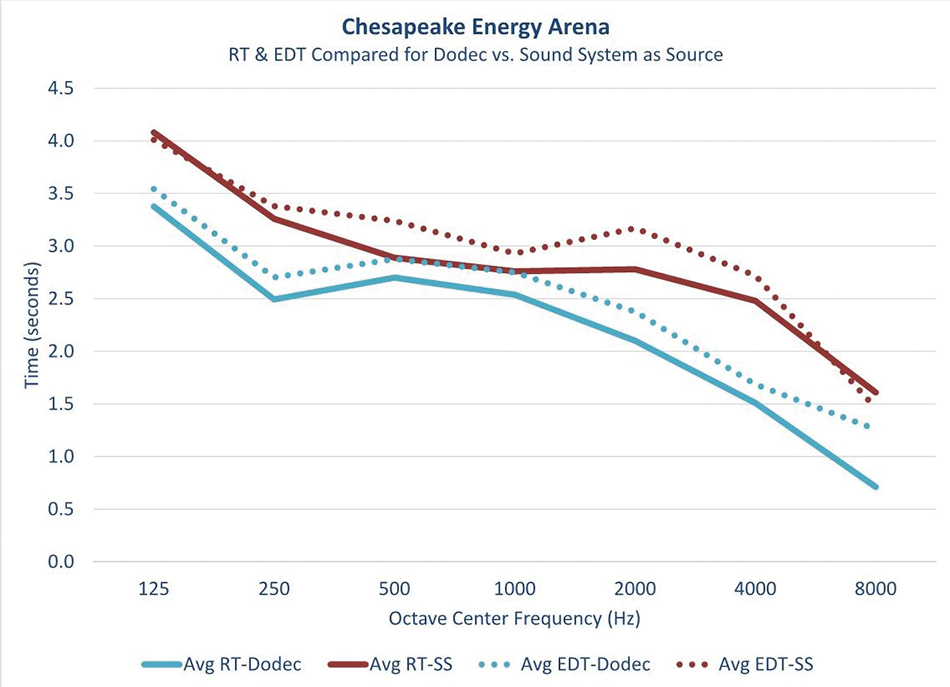 Figure 1. Measured RT and EDT using a dodecahedron loudspeaker compared with RT and EDT with the new sound system as the source.

Marsh/PMK International was initially engaged to study the existing acoustical conditions and sound system performance at Chesapeake Energy Arena as part of determining the design requirements of a new sound system. We were subsequently hired for design of a new system and “room acoustic” renovations in the arena seating bowl. This sidebar presents a brief summary of our measurements along with some of the more interesting results of our analysis.

Reverberation Time (RT) and Early Decay Time (EDT) were determined in octave bands from impulse response (IR) measurements using an omnidirectional dodecahedron loudspeaker (dodec) on the arena floor and multiple microphone locations in the lower and upper seating bowl. RT and EDT were also determined using the new sound system as the source. Figure 1 compares the average results of both methods.

RT is longer when measured with the sound system (blue curve) than when using an omnidirectional source (red curve). EDT is longer than RT in both cases. These are important observations because RT is a significant determinant of speech intelligibility and EDT is thought to influence a person’s perception of musical clarity more so than RT. The mid-frequency RT (average of 500 and 1000Hz) is fairly close in both cases: 2.6 seconds with the dodec and 2.8 seconds with the sound system. However, the 2000Hz RTs are considerably different: 2.1 vs. 2.8 seconds. This is important because sound in the 2000Hz octave band contributes more to intelligibility than any other octave band.

Audible echoes with the previous system were also observable in IR measurements as shown in Figure 2a. IRs measured with an omnidirectional mic were overlaid with IRs obtained with Audio-Technica’s (discontinued) AT895 Adaptive Array Microphone in the “shotgun” mode (20º acceptance angle).

Figure 2b shows how this helped to establish the arrival direction of echoes.

We used acoustical modeling to confirm suspected echo-producing surfaces. Figures 3a and 3b show the main culprits, which were the “drum wall” above the upper-level seats and the front faces of Terrace Suites.

We made frequency response measurements at multiple locations in the lower and upper seating bowl for both the previous and new sound system. The response of the previous system varied wildly among locations. In fact, the level in the upper bowl was about 10dB below that of the lower bowl in many locations. In contrast, levels vary no more than ±3dB among all 1/3-octave bands from 1000Hz to 4000Hz across all locations measured with the new system, and broadband levels (dBA and dBC) vary less than 1dB.

Figure 4 compares average shape of each system’s frequency response. To do this, we normalized all response measurements to a level of 95dBC before averaging. The new system (red curve) is equalized flat across the midrange with a rise in low frequencies and a 3dB per octave roll off above 4000Hz. The previous system (blue curve) was sorely lacking in low frequencies. Additionally, there was a bump in the lower midrange that “muddied” the sound and an overall dip in the 1000Hz to 4000Hz range most needed for speech intelligibility.

Figure 5 plots 1/3-octave average levels measured at multiple seats during two NBA games in the arena. Equivalent Continuous Levels (Leq) are plotted as solid curves, while corresponding maximums (Lmax) are plotted as dashed curves. The blue curves are for a regular season game using the previous sound system. The red curves are for a preseason game using the new sound system. In both cases, crowd noise dominated the long-term spectrum from 400Hz to 8000Hz. However, the regular season game crowd was larger and the average level was higher as seen in the upper range of the Leq spectrum. Yet, the low-frequency level was higher at the preseason game. This is due to the extended bass response of the new sound system. The new system’s overall extended response is unmistakable when comparing the Lmax curves. Moreover, a greater difference between Lmax and Leq at the preseason game indicates that the new system has a wider dynamic range.

Figure 6 tabulates objective speech intelligibility averages for the previous system and the new system over a limited number of measurement positions. STI and equivalent STIPA values were derived from IRs. STIPA values are reported here only for the new sound system. This is for comparison to directly measured STIPA at the same seats using a newly installed feature on our sound level meter with the standardized STIPA signal playing through the sound system.

Recommended acoustical treatments were not yet installed at the time of our measurements. This may partially explain why average STI values were only marginally higher with the new system. A better explanation is that too few locations were measured with the previous system to obtain a valid average. Intelligibility at the preseason game with the new system was perceptually far more consistent throughout the arena than with the previous system. We are confident that intelligibility will rise progressively as acoustical renovations are completed in the coming months.