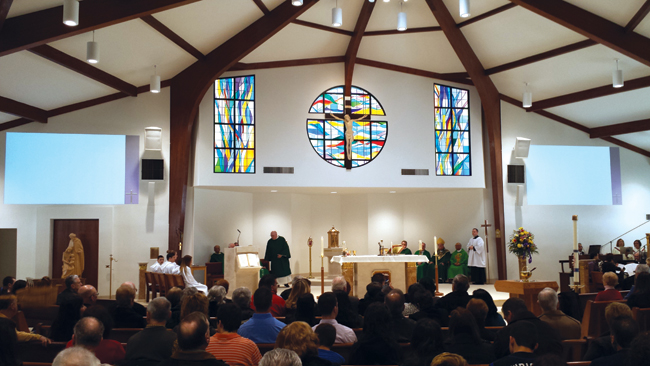 It has been 136 years since a small congregation built the Church of St. Gabriel (stgabrielsparish.org) in Marlboro NJ. Despite setbacks, the Roman Catholic parish has continued to flourish. Continuing that tradition, the current renovation was accompanied by a substantial AV upgrade. Fortunately, two AV integrators who’ve helped in expansions over the years continued to offer their services for the current project. Accordingly, we’ll discuss their perspective, as well as the viewpoint from St. Gabriel’s deacon.

Before we launch into the AV, here’s a short history of the church. In the beginning, Father Frederick Kivelitz made his way via horse cart to say mass for the Catholic families in the village of Marlboro and the faithful in other surrounding villages. In 1878, the small congregation, under the priest’s guidance, erected the first St. Gabriel’s. The original building was a 30’x50′ brick structure with a seating capacity of 250. Fast forwarding, current seating is around 600, with the longest audio throw 70 feet from the altar’s front wall to the back wall entrance.

Through the years, the church carried its triumphs and adversities bravely. The latter included several fires. One such event occurred after one of the famous dances in one area of the building. Fire bells rang out and the building was reported to have burned like a paper bag as hundreds of sad people watched. Despite hardships, St. Gabriel’s continues to grow, and offers a variety of parish, community and apostolic activities. Five masses are offered over the weekend.

For this piece, we interviewed Principal Consultant John Dalton, IT Initiatives, Inc. (Manalapan NY, itinitiatives.com); Steve Minozzi, Co-Director, Monte Bros. Sound Systems, Inc. (Ardsley NY, montebros.com), who implemented audio within the church and completed upgrades to the existing system in the parish hall; and Steve Sansevere, Deacon and Pastoral Administrator at St. Gabriel’s, and the church’s go-to AV person. (Although not included in our interview process, Whitlock (whitlock.com) was the AV integrator.)

IT Initiatives’ John Dalton noted that the Church of Saint Gabriel is a long-term client of the firm. “Because of our unique relationship with the church,” he said, “we provided some strategic planning, as well. The largest challenge in a worship space, specifically a Catholic worship space, is to always ensure that technologies aren’t apparent as you go into the parish. We always want to integrate the technologies into the architecture of the worship space. Time, fortunately, was not much of an issue.”

Dalton affirmed that Whitlock implemented an IT Initiatives-designed solution to the full expectation of both the firm and the church. Furthermore, IT Initiatives selected Monte Bros. to implement audio for the church.

The AV is all Crestron based. Starting with video in the worship space, everyone in the congregation seated in the nave and the north and south wings need to see screen content displaying readings, hymn lyrics, camera views of the celebrant, presentations and other produced program sources. The pastor specifically did not want conventional obtrusive screens installed. The solution was to use two walls, approximately 12’x7′ in the sanctuary left and right, painted with Goo Systems’ maximum contrast Screen Goo. Two Christie DHD775-E HD DLP projectors mounted in the rear of the nave shoot onto the Goo painted screens.

“The paint-surface screen quality is very viable and the pastor was very pleased with the outcome,” said Dalton. “We used a [Sharp LBT462U] 46-inch monitor in the narthex as a digital donor board. It reduced the cost of a donor ‘tree of life’ by almost 80%. Traditionally, we see extreme costs associated with these trees of life. To reduce cost, we did it electronically. The monitor showing donor information is preprogrammed to turn on and off during worship times. The church was very pleased with that.”

Video inputs include a Denon DBT-1713UDP Blu-ray player, a Crestron DM input plate within the liturgical music area adjacent to the altar, a future digital signage input via DM-HD, and a Vaddio DH19 1080p PTZ camera mounted at the rear of the nave.
The church also wanted the ability to record content from masses for future use in broadcasting on the web. Crestron’s wireless-controlled Capture-HD system fulfills that need. Thus, there’s an accompanying 5.7-inch touchscreen interface for users such as a liturgical music director. An AV3 control system provides the backbone.

“The Capture-HD system allows the church to record activities and place them simply onto a thumb drive,” explained Dalton. “All the operator has to do is press a button and it will automatically record the PTZ camera. When done, just press stop. It plays to the file and thumb drive, which connects directly to a computer.”

There’s no traditional mixing board in the worship space. The Crestron interface is used to attenuate specific microphones only a few dBs. “We also have a separate set of screen pages that require a specific password,” said Dalton. “For instance, the user can attenuate the priest’s mic.”

The parish hall has a similar Crestron AV3 control system and a network switch interconnected to the main system. Equipment access is via a seven-inch touchscreen. A Christie LWU421 LCD projector shoots onto a ceiling-mounted Da-Lite 52″x92″ screen. An existing audio system was used within the space, which is used for overflow applications for occasions, such as Christmas, Easter, Palm Sunday and Ash Wednesday. Live video from the church can be fed to the hall, so people there can participate in the liturgy. The system can also be used independently from the church system.

As mentioned, Monte Bros., which has done a lot of work for St. Gabriel’s in the past, was tasked with the audio implementation. “Our main job was to put in a sound system that accommodates the new acoustic profile and makes the parishioners happy at the same time,” said Steve Minozzi. “Even though the footprint is the same, the acoustics were completely different. When the church renovated the space, they changed the surfaces of the walls and floors. Hard stone floors were installed in the main nave and the north and south wings (everything was carpeted before). The acoustic tile ceilings in the wings were replaced with drywall ceilings. So, you have stone floors and sheetrock. That was the challenge.”

Before launching into the solution, Minozzi explained the reasons for choosing CAMM speakers throughout the worship area. “CAMM speakers have the metal cone and ferrofluid voice coil technology, which are not heavily affected by temperature and humidity. Also, [the company] is willing to work with the owner, cosmetically.” At Saint Gabriel’s, it was important that AV technology be integrated into the architecture and be unobtrusive. Speakers are driven by Crest CM2208 and CPX900 amplifiers.

Minozzi explained that the solution employs “critical zone digital delay,” which was developed by Monte Bros. Thus, the two cylindrical waveform CL-43L line arrays in the front wall altar area are time-aligned with the DT-2T fill speakers on the sides where the beams are located, in front of the north and south wings. The procedure involves actually being there in the church to determine proper coverage by measuring distance and SPL.
“We have to shoot lasers to the front speakers and then to the peripheral zone of each of the side speakers at the point where you’d be hearing both speakers,” he pointed out. “The critical point is the most difficult point to hear. It’s where both speakers have to hit at the same time.” In Saint Gabriel’s, the critical zone is in the center of the nave. After the critical point was determined, Minozzi said, “We used the ability of the Nexia CS DSPs to convert feet to milliseconds and establish the correct delay time.”

The line arrays and the adjacent DT-800s blend the spoken word. However, the video program audio predominately comes from the two full-range 800s. “So, you get a nice full sound,” said Minozzi, “and yet the line arrays focus like a flashlight beam into the hard-to-reach areas for intelligibility. It’s a good combination of speakers.”

Four DTC-1s are ceiling mounted in the north and south wings. The speakers, which don’t have tweeters, were chosen because of the low 10-foot ceiling. They prevent the parishioners’ ears from being constantly bombarded with annoying high frequencies. The same speaker model is also mounted in the narthex, which prevents high-frequency annoyance and eliminates feedback during certain Holy Days, like Easter and Palm Sunday, when the celebrant walks under the speakers using a wireless mic.

Furthermore, the narthex and cry room DTC-1 speakers are independently managed from microphone processing. There’s no gating and no EQ in their feed. Similarly, the DTW-1 flush-mounted wall speaker behind where the priest sits at the rear of the altar is independently managed.

Regarding control devices, a Biamp Audia volume/SEL8 button panel is available on a cable in the choir area to provide slight adjustments and a variety of presets, such as mic selections and mic on/off. Mics can also be controlled via Crestron touchscreen where there’s the aforementioned recording capability.

Audio-Technica ES (engineered sound) microphones include 915/ML goosenecks for the pulpit and lectern, 935/ML goosenecks for the choir, organ and piano, and a 961 boundary mic. There are two AT894s over-the-ear headset mics for clergy. In addition, the choir has four Audix MB8455 mini boom mics. Microphone inputs are located throughout the altar, band and choir areas.

St. Gabriel’s Church Deacon Steve Sansevere, a retired Jersey City Police Department sergeant, has experience as a chaplain in law enforcement. He gave us his perspective as an end user. “I wear many hats here,” he said. “I have an administrative side, which deals with the audiovisual. And then I have the ministerial or clergy side, which is the deacon.” He acknowledged that John Dalton “is our IT guy here. He was the one who guided us. And we’ve known Monte Bros. for a long time.”

He stressed that “People can see the readings on the screen and participate a little better,” adding, “I think it gives them a better feel for what’s going on during mass.” He added that it really helps to be able to switch back and forth between the readings, hymn lyrics and video camera views during the service. “During consecration or when something specific is going on, we can switch to get a close view of the altar and the celebrant.”

Sansevere noted that “the audio is outstanding. Initially, we thought we were going to have a lot of difficulties with feedback and other sound problems. Monte Bros. worked hard to adjust the sound.”

According to Sansevere, “We can do more things than we were able to do before. If we want to play back messages, it works well. For instance, once a year, the bishop comes out with an appeal for the diocese, and we play it back on DVD. We [used to] have to put a projector up and hang a screen. Wires were running all over the place. Now, I go in, pop in the DVD and I’m done. We’ve tried to set up [the AV] as user friendly as possible.

“There are some other benefits,” he added. “The system allows us to do presentations. We have our confirmation class coming in next week where we can use PowerPoint. And we have the same ability in the church hall.”