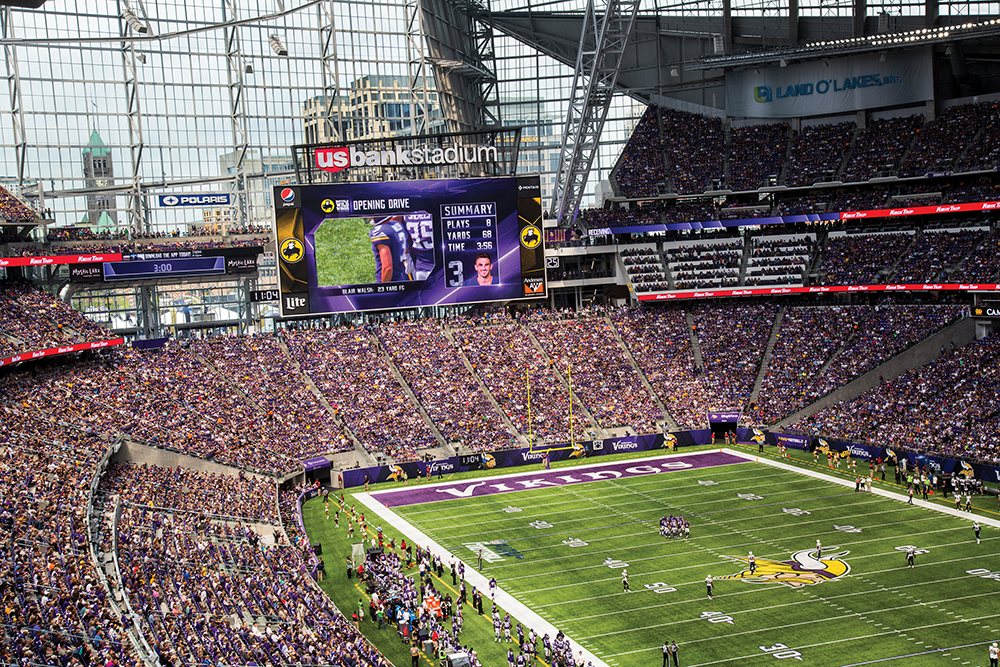 The new US Bank Stadium took a “village” of tech players to deliver fantastic and unique in-venue experiences for fans.

Digital media projects require many teams with specific expertise to collaborate for successful implementation. Because a digital signage network is only one of the channels of content distribution, it is helpful to view it within the digital ecosystem at the very start of a project. When a digital signage project goes “dark” before full rollout, it may be because key personnel were not involved in the needs analysis and pilot phases. Who should participate and at what stage?

The answer depends on several factors: most importantly, the business model, content strategy and the type of industry within which the digital signage network operates. For example, in a couple of cities, the mass transit authority in partnership with a DOOH (digital out-of-home) operator has deployed a signage network designed to provide passengers with schedules and other relevant information, as well as to yield a return on investment through advertising revenue. In these cases, it was necessary to involve an ad space sales representative or agency.

Who gets invited to participate also depends on who is funding and who is leading the project. Oftentimes, senior management may not know what expertise is necessary, and in an effort to deploy digital signage rapidly may leave out a team that’s critical to the implementation. If an external group such as an advertising or public relations agency assumes the lead, their vision of who to involve in the project may be limited by their expertise or agenda. In such instances, the design consultant or systems integrator should step forward and advise on the participation of essential teams.

The digital future will necessitate the convergence of viewer engagement and multisensory experience technologies with data analytics software. Although mobile device interactivity with signage displays has been in the mix for some years now, its potential has not been fully leveraged. When mobile interactivity is specified in the design, input from an appropriate telecom professional will be necessary. It may also be advisable to add a data scientist or information architect to the team.

In a corporate or institutional setting, one department typically champions the project and brings in other teams. Frequently, it is the VP of Sales and Marketing who is willing to commit budget to the project. Participation of the IT Department is essential, not only due to expected demands on the network, but also because data analytics can provide information critical to justifying return on investment or return on objectives. The Communications Department is often brought in to discuss content acquisition, creation and distribution. Facilities Management is usually involved in the selection of display locations and handling other installation considerations. Although the Security Department is sometimes forgotten, it plays a critical role in the optimum utilization of public-facing digital displays, especially for use in emergency messaging.

External team members typically include a system design consultant, systems integrator, content designer and, on major projects, manufacturers’ staff. Securing manufacturers’ support brings awareness of future technologies to factor in, as well as during the integration phase. Several manufacturers have set up internal teams or distinct business entities to address the complex requirements of large signage deployments in specific industries, such as transportation, QSR (quick service restaurants), sports and entertainment venues, healthcare, and hospitality. In some instances, the manufacturer’s team takes the lead and works with local vendors, including the systems integrator, to manage the application, permitting and final inspection process.

Digital menu boards for cafeterias call for participation of catering companies such as Sodexo. Branding and special initiatives, such as centenary celebrations and fundraising programs, customarily bring advertising and public relations agencies into the mix.

Although sponsor messages and other timely content are often displayed on scoreboards, the design, selection and installation of scoreboards and related video technologies do not typically involve digital signage teams. However, the inclusion of ad inserts, sub-sponsorships and non-sports-related announcements often adds to the list of involved parties.

Apart from the input of varied stakeholders, the successful rollout of a digital signage network depends most heavily on the specialized expertise of several key teams. The names may vary from project to project, but every function is usually assigned a specific department or vendor. Best practices suggest that all departments and vendors involved in the project should be represented on a working group that meets regularly from inception through acceptance.

Leaving any of the functional groups out of the loop, even for a short time, can result in a misstep that requires backtracking and expensive changes. For example, a change of large-format display model or size due to product discontinuation could affect the look and positioning of displays, which in turn could have significance for facilities managers, content designers and even ADA compliance officers.

So, when planning for a digital signage deployment, make sure that there is enough room at the table for all the stakeholders, and don’t forget the dessert.