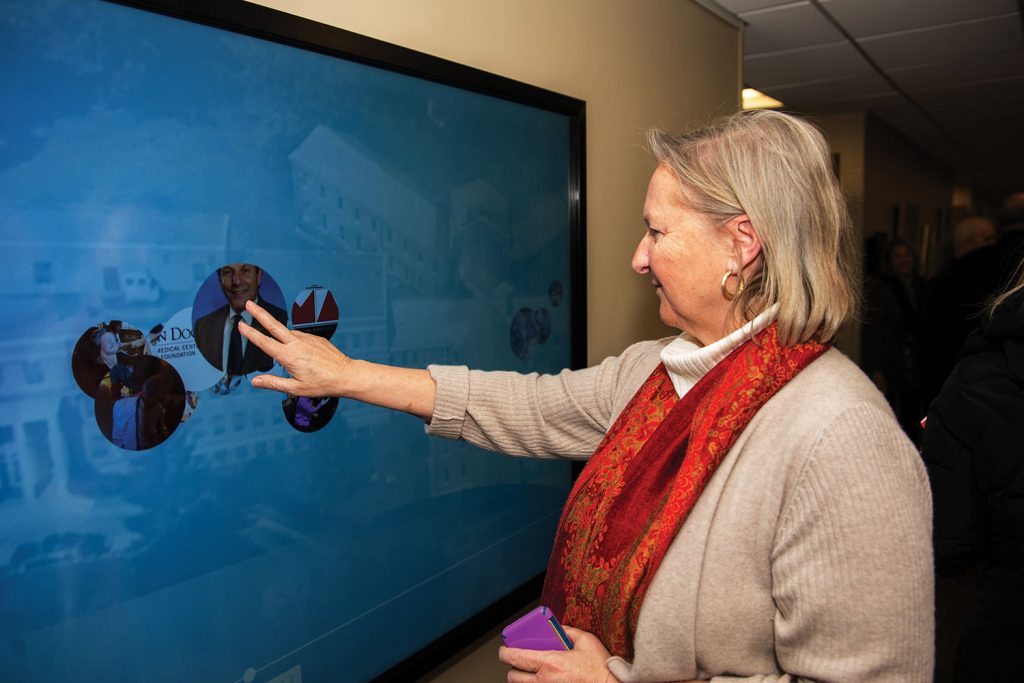 Choosing the right location and screen size are critical for effective touch interactivity with the content displayed. Also consider foot traffic flow in the area, as well as the space needed for a relaxed user experience. Touch interactivity is a great way to enable easy access to content, and is now fairly simple to deploy, thanks to the increasing availability of large-format touchscreen displays. Corporations and institutions are using digital signage to champion new initiatives and build communities. Could your current IT/AV clients also benefit from deploying interactive signage?

A recent project celebrating the 100th anniversary of Northern Westchester Hospital (NWH) in Mount Kisco NY involved the installation of an 85-inch Samsung 4K edge-lit touchscreen, which is accessible to employees and visitors alike. “Our vision for the NWH Centennial campaign is to weave celebration into employee and community events, traditional and digital marketing, as well as internal and external communications, through a consistent message that can be maximized in reach throughout the year,” said Daphne Viders, NWH Centennial Project Manager. Among the identified goals: employee engagement and pride, hospital brand awareness, strengthening community connections, celebrating the history of medicine in the community, and donor cultivation and stewardship.

Realizing that digital content and messaging development, and the selection of media distribution channels, would play a significant role in viewer engagement, NWH brought in Fifteen Degrees, a New York City agency specializing in the creation of emotional branding campaigns. As with many signage deployments, this project included several stakeholders. The NWH internal team included the hospital’s Foundation committee, as well as HR, IT and Marketing departments. Fifteen Degrees brought in its programming consultant, NIFTIT, and installation partner, Custom Digital Signage. After initial meetings, needs analysis and review of content assets, the decision was made to create an interactive history timeline to be displayed on a large touchscreen in the hospital and on the hospital’s website for access via internet-connected computer, tablet or smartphone.

Choosing the right location and screen size are critical for effective touch interactivity with the content displayed. Also consider foot traffic flow in the area, as well as the space needed for a relaxed user experience. The hospital considered several sizes for the main screen, but eventually chose the 85-inch screen because it best fit in the selected location. “Many areas within the hospital were reviewed but, ultimately, the conference room corridor proved to have the highest visibility,” noted Viders.

“The 85-inch screen allows users to maximize the experience while keeping the volume within the confines of the hallway and not disturbing the activities in the conference rooms,” Viders added. “We want users to have a fully interactive experience while scrolling through periods of time. They can read short blurbs of information, view pictures, and watch and listen to short and very engaging video content,” she explained.

The content was developed in HTML5 with the history presented by era, with each era featuring seven to 12 images and relevant video stories. “One challenge was to serve up the digital assets with close to zero latency,” noted Richard Clarke, Co-founder of Fifteen Degrees. “We used Amazon’s CDM [content data management] web service, which produced an efficient loading of videos and images so there never appears to be a delay in the content,” he explained.

Discussing other challenges, Clarke noted that the hospital needed a secure application that could be updated easily but still live within a restricted hospital environment with strict firewall policies. “An early decision that addressed ease of use, as well as security and privacy concerns, was to not require user login or for the system to capture user data,” said Clarke.

Content for delivery across various channels and screens calls for programming expertise. “The code base for NWH’s content is shared, so the challenge was the responsiveness relative to screen size. Additionally, the content and code had to work on NWH’s website and on users’ mobile devices. So the tricky part was using this same code base to load without any noticeable delays on various devices, with a simple UX [user experience],” said Clarke.

According to Clarke, designing the UX was also a challenge. “Navigating content on the Samsung touchscreen is quite different than when using a mouse with a computer or a finger on a smartphone. These issues were addressed, and personas created, to enable the user to experience the presentation on any device. The site layout, graphic design and site navigation were all developed early on in the process, prior to any coding, all with the goal of achieving ease of use and simplicity of motion,” he explained.

At the time of this writing, the historical timeline is the only content available on NWH’s interactive screen. However, content continues to be updated and refreshed periodically, thereby providing incentive for users to further explore the content. “Hospital highlights throughout the year, as well as updated video footage, are easily uploaded through an online portal,” Viders said. “The interactive timeline is an additional vehicle for promoting hospital news and events as part of the broader digital marketing efforts, along with our website, Facebook and Twitter,” she said.

As the NWH project reveals, the successful delivery of dynamic content across several media channels requires effective collaboration among various stakeholders, as well as the expertise of technical and communications professionals with a track record of designing the kind of user experiences that will achieve the client’s goals.

If you are specifically interested in technology and business strategies for consumer engagement in the growing health and wellness services industries, you might want to attend “Connected Health Summit: Engaging Consumers,” sponsored by Parks Associates, scheduled for August 30 to September 1 at The Omni Hotel in San Diego CA.