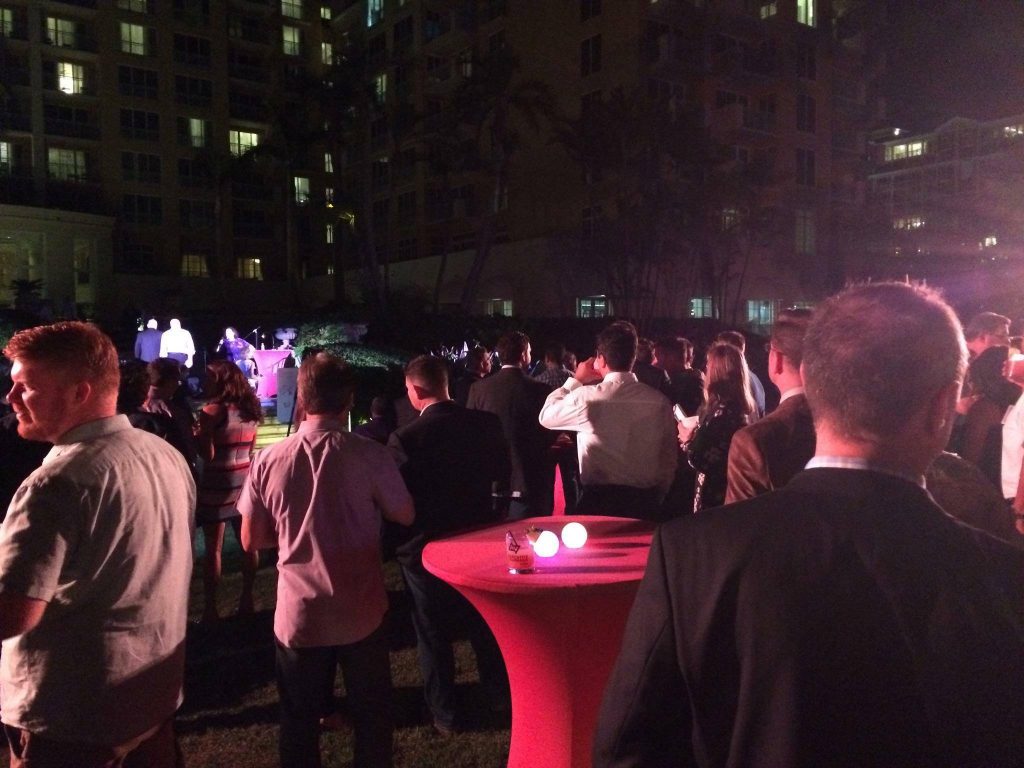 The Audiovisual and Integrated Experience Association (AVIXA) continues to invest in professional-development opportunities for commercial AV professionals. Nowhere was that investment clearer than at the 5th annual AV Executive Conference (AVEC), which was held, for the second consecutive year, at the Ritz-Carlton Key Biscayne in Miami FL. More than 200 leaders in the AV community—manufacturers, distributors, integrators, consultants, association personnel and media members—gathered from November 8 through November 10 to gain insight into global macroeconomic trends and microeconomic developments within our industry, as well as to be educated and inspired by thought leaders and business coaches. The speakers’ wisdom left every attendee excited to put new ideas into practice.

Taking advantage of the gorgeous surroundings, the program began on November 8 with a golf tournament at Crandon Golf Club. Later that evening, back at the Ritz-Carlton, awards for the tournament were bestowed during the Opening Reception, which Almo Professional A/V sponsored. The reception offered a rare opportunity for some of the industry’s most influential executives to network in an intimate, private space filled solely with audiovisual practitioners. During the reception, journalist and economist Marci Rossell gave a high-level overview of the current economic state, whetting attendees’ appetites for her more detailed presentation the following day.

The next morning, when Rossell again addressed attendees, she stated that economic growth seems to be happening just about everywhere in the world right now. She also noted that, with oil and commodity prices having stabilized at unremarkable levels, businesses that sell those commodities can make a decent profit even as consumers aren’t pinched by prices. For those reasons, her overall assessment was generally positive. She voiced notes of concern, however, about the US’ constrained growth rate of approximately three percent, while also identifying the labor market as being constrained. The pace of productivity growth, she said, is slowing down; she attributed that to the fact that, in her estimation, the last game-changing productivity enhancer was the desktop PC. She also addressed the topic of millennials, saying that, as compared to Baby Boomers, they’re about 10 years delayed relative to hitting benchmarks like marriage and home ownership.

Next up was Sean Wargo, Senior Director, Market Intelligence, AVIXA. He said that AVIXA wants to be the authoritative source for market intelligence in our industry, and then proceeded to share vital information with attendees. Echoing Rossell’s remarks, he said that global growth right now averages out to 3.7 percent. With regard to the global AV industry, its size was $178 billion in 2016, $183 billion in 2017 and, by 2022, it will be $231 billion—that’s $53 billion in added value over a six-year period. Looking solely at the Americas, he pegged our industry as equaling $67.1 billion.

Wargo tackled the vertical markets that comprise the AV industry, identifying hospitality and healthcare as the hottest segments relative to global growth. Energy efficiency, connectivity (e.g., the Internet of Things, IT/AV convergence) and heightened realism, he said, are driving growth across all segments and hastening the evolutionary pace. Partly for those reasons, we’re seeing both sales and employment growth, and we can expect that to continue.

Following that presentation was an end-user panel, composed of Etsy’s Josh Henning, PayPal’s Rebecca Onchi and MetLife’s David Marsac, interviewed by AVIXA CEO David Labuskes. The panel offered a fascinating window into the end-user perspective relative to audiovisual technology and working with systems integrators. The panelists discussed the importance of relationship-building and continuing partnerships, saying anyone who’s just looking to sell and install gear isn’t likely to be selected. They also stressed that owning up to mistakes—not deflecting from them—is critical. It’s not about blame, they said, but rather about acknowledging something went wrong, offering a solution and getting things back on track.

Attentiveness to detail was also stressed. After integrating a system in a conference room, be sure that handprints are wiped away, food wrappers are disposed of and, in general, the room looks pristine. Interoperability was addressed, as well. An integrator that shows how its products will be interoperable with the company’s existing products will have a leg up on those that don’t. Finally, all the panelists underscored that integrators must listen to prospective clients about what their needs are. “Don’t try to sell me a solution to a problem I don’t have,” they stressed.

From there, the day transitioned to more of a workshop-based approach. Speaker/author Stephen Shapiro and ICM Partners’ Head of Digital Ventures Jonathan Perelman offered a strategic overview of disruption and differentiation; then, the executives in attendance split into breakout sessions to explore the subjects more extensively. In an industry that evolves as quickly as ours does, the warning against stagnancy was powerful—the point was made even more profound when Shapiro rattled off a list of once-dominant names (Blockbuster, Radio Shack, Circuit City, etc.) whose business models were disrupted but that were not able to adapt adequately.

That evening, attendees enjoyed a wonderful dinner, which Herman Pro AV sponsored, and had several more hours during which to network with peers and colleagues. After breaking bread, attendees celebrated the bestowal of AVIXA APEx Awards and then hung out in the AVEC Lounge, sponsored by Synnex, to cap off the night.

The final day boasted two powerhouse speakers: John Foley, a former Blue Angels lead solo pilot and a businessman, and Daymond John, Founder/CEO of FUBU and famed television personality from “Shark Tank.” Foley drew heavily on his awe-inspiring background as a Blue Angels team member to argue that humans are capable of extremely high performance—but only if they train themselves to be high performers. The key, he said, is to be mission-focused and purpose-driven…to believe in something greater than yourself. “We must overcome the limiting beliefs that hold us back,” Foley argued, saying that if you can up your belief—in both yourself and your mission—high performance will naturally follow. His mantra, however, was, “Glad to be here”—a message of constant gratitude and diligent acknowledgment of all the good things happening in your life. To be grateful and happy, he said, will naturally enhance mental acuity and produce high performance.

AVIXA’s AVEC represents a truly unique blend—an unparalleled gathering of upper-echelon AV executives whose decisions guide our collective future; in-depth data and analysis of the AV market from our industry’s trade association; an economist’s view of the macro trends that inevitably affect our trajectory; and edifying presentations by thought leaders who can take high-level principles and boil them down to actionable insights that AV executives can apply to their businesses (and, indeed, their private lives.)

AVEC is just another example of AVIXA’s continuing efforts to not only drive our industry’s evolution from box sales to experience creation, but also inspire industry members to reach their maximum potential and, in so doing, help the commercial AV market reach its own.