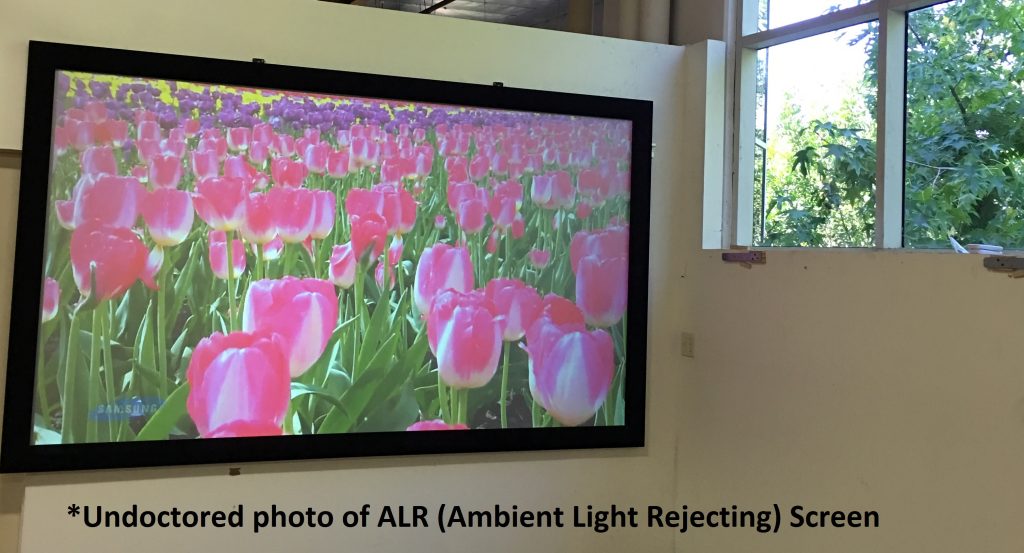 How does an ambient light rejecting material actually “reject” an indirect light source and why should we love the concept?

Ambient light allows us to see the world. From the moment of our first breath to our final sigh, the waking hours of our lives are bathed in ambient light. Think of your best days under the sun; the warm, rustic glow of candles and firesides, or the countless lightbulbs that have illuminated your path through all these years. Of all the phenomena in this great universe, it has contributed so much to the quality of our lives…unless you are trying to get a good picture on any large video display. Then it is just too darn bright. Once again, the old adage that you can have too much of a good thing proves correct.

The term Ambient Light Rejecting (ALR) is part of the AV industry nomenclature as a screen feature that prevents ambient light from washing out an image. There are AV purists out there who disagree with the use of the word “rejecting” and, technically, they are correct. ALR does the opposite of reject: It either absorbs or diverts ambient light away from the viewer’s field of vision. So why say ALR? Simple: “Ambient Light Rejecting” gives customers an easy mental image of a screen that gets rid of ambient light and its washout effect.

Also, Angular divergent reflectivity of indirect light sources within an absorbent active matrix to mitigate the intrusive effects of luminous inundation onto projected images is too much of a mouthful, and every marketing team out there hated it. Besides, “Ambient Light Absorbent” sounds like something you clean your kitchen floor with.

To AV integrators, ambient light is any atmospheric lighting that originates from an indirect source of luminance that can be inside, outside, naturally or artificially occurring. Basically, it’s any light source other than your projector that threatens to wash out your image or otherwise impair its visual aesthetics. This includes, but is not limited to, outside light coming through windows and skylights, track lighting, in-wall/ceiling lights, lamps, candles, fireplaces or even the light of your own video screen reflecting off light-colored surfaces in the room.

It is surprising but true: Light-colored walls, ceilings and flooring can all contribute to ambient light problems, and can negatively affect your system’s video performance. When projected light bounces off the projection screen, it turns every surface in the room into a potential reflector that will, in turn, contribute to washing out the fine qualities of the projected image. So, yes, dressing up like Mr. Roarke and projecting Fantasy Island episodes in a room lined with white marble floors, alabaster walls and a whitewashed ceiling is far from ideal for getting the best out of the projection screen. Next time, think Knight Rider, instead.

The bottom line is that most rooms do not have 100% control over environmental lighting. As nice as it would be to have total control over interior and exterior light sources in all the rooms at any facility, it must be assumed that you will never get this with any regularity. This has been a problem because businesses are trending toward using projection screens in the same role as flatpanels, but have been forced to make do with a badly washed-out image because white materials are unsuitable for use with the lights on. The larger screen size is more advantageous to business applications, and the washout effect does not have to ruin the presentation. An ALR material replaces smaller flatpanel displays with a larger-than-life 100-plus-inch screen while rivaling the brightness and clarity, as well.

To some degree, a brighter projector does help. The extra brightness drowns out a little more of the milky-white glare of indirect room lighting. However, it does bring with it a negative effect: As much as you want a bright, colorful image, you don’t want it too bright, or contrast suffers. An excessively bright screen can also cause eye discomfort, so a more practical solution is necessary.

Instead of thinking about a brighter projector lamp, consider a specialty projection screen. ALR screens come in two basic formats: retro reflective or angular reflective. According to the Law of Reflection, “The angle of incidence upon a flat surface will have a matching opposite angle of reflection.” This is clearly seen in an angular reflective projector screen, but a retro reflective screen has microstructures that limit this type of reflectivity from occurring beyond a narrow angle of about 5°. ALR surfaces may not fully react in accordance with the Law of Reflection because they add their own variables, which are either microstructures or multi-layered optical filters. Normal white projection screens have Diffusion Uniformity that scatters the projected light to provide uniform brightness over the full 180° of the projection angle. However, it scatters all light, not just the projected signal, so high levels of ambient light will wash out the image on a standard white screen.

Angular Reflective means that light reflects off the surface at precisely the opposite angle of incidence, exactly as the laws of reflection describe and as illustrated in Figure 1.

This type of screen is the preferred model for commercial applications, but also widely popular in residential applications. The material prevents full diffusion from occurring, providing greater control over the washout effects of ambient light. The focused reflectivity rewards viewers with a bright projected image that achieves a superb level of color temperature. At the same time, off-axis light is diverted away from the viewer’s range of visible perception. Its multiple layers of diffusion material further negates the washout effects of ambient light while also enhancing black levels for sharp image clarity.

Retro Reflective means that the material will reflect back the image, direct to the light source. This limits the options of projector placement, but its performance levels are so superb, this approach typically is the overall favorite of home theater aficionados. See Figure 2.

A retro reflective ambient light rejecting screen essentially absorbs ambient light away from the viewer’s field of vision. The screen does this by means of an active microstructure design. In essence, this means that the actual reflective surface of the screen has been structured down to a microscopic level in order to reflect the projected image directly into the viewer’s field of vision while absorbing the majority of all other indirect light.

A cross-section of the active retro reflective material reveals that the reflective surface actually has a serriform, or “saw-tooth,” microstructure. This acts as a funnel to concentrate the direct light of a projector back in a narrowed angle of reflection that is comparatively a small “pie-slice” of the 180° brightness of diffusion uniformity. At the same time, indirect light is either absorbed in the dark saw-tooth formations seen in the picture or otherwise canceled out by the diffusion layers.

With retro-reflective materials, light coming from the projector must hit the material in direct alignment with the screen’s level center without being off by more than 5º. Any vertical off-axis angle of projection greater than that will be reflected at so extreme an angle that it will not come into the viewer’s field of vision.

There are two steps you must take to calculate this angle:

Here are the basics in positioning the screen.

Viewing: The optimal alignment with the human eye should be with the bottom third (1/3) of the screen’s overall height. (The average height of the human eye is 50 inches (127cm) seated and 60 inches (152.4cm) standing.)

Seating: The optimal viewing distance from which one can comfortably view a projection screen is 1.5 times the screen’s actual width.

Normally, you can use dead reckoning to gauge a reasonably good vertical projection angle inside of 5º. However, if you insist on doing the math, here is the way to calculate the angle as follows. Pretend the projector is 17′ (204″) from the screen and 17 inches above the screen’s center (Figure 3).

The diagonal is roughly 205 inches.

Because the angle is within 5° of the projector’s vertical axis, this installation is appropriate for a retro reflective material.

ALR enables the viewer to maximize the effects of optimal contrast and even ISF Certified Color Temperature. It enhances brightness while filtering out ambient light. This creates a realistic image that allows 4K content to be appreciated in its full glory with the lights on or off. Color is more defined; the sharpness and image clarity of high-resolution (UHD and 4K) content is more defined.